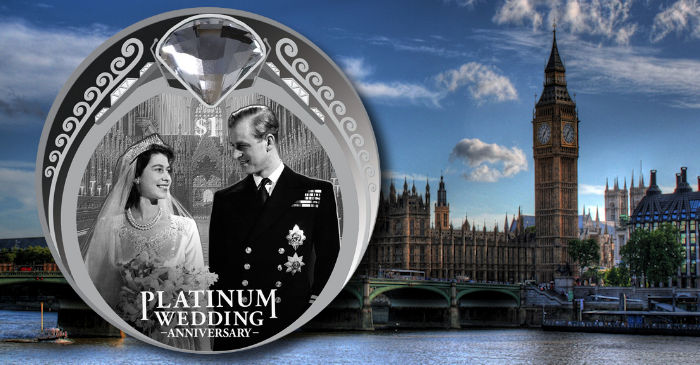 The Reserve Bank of New Zealand have issued (1st November) a new silver Proof $1 coin which celebrates the extraordinary occasion of the 70th (platinum) wedding anniversary of New Zealand’s Queen Elizabeth II and HRH Prince Philip, Duke of Edinburgh, who married in a lavish ceremony in 1947 — just two years after the end of the Second World War. Their enduring love story began somewhat sooner than previously thought, as then-Princess Elizabeth and Prince Philip of Greece and Denmark were said to have become engaged in 1946. However, it was not formally announced to the world until the following year, on the 10th July 1947, after Princess Elizabeth had turned 21.

Prince Philip — as most prospective bridegrooms do — gave his intended fiancé Princess Elizabeth an engagement ring, on the 8th July 1947. Custom designed by the prince himself, the platinum band was set with diamonds from a tiara given to his mother, Princess Alice of Greece, by Nicholas II — the last tsar of Russia. Unfortunately, and despite Philip’s painstaking attention to detail, the ring was too large for Elizabeth’s finger and was quickly resized so that she could wear it comfortably when the announcement was made public two days later. There were many preparations before the marriage could take place, including the renunciation of Prince Philip’s titles as Prince of Greece and Denmark, as well as the adoption of his mother’s family name of Mountbatten. In exchange for his renunciation, he was made the Royal Duke of Edinburgh and made a Prince of Great Britain and Northern Ireland with the style of His Royal Highness by his future father-in-law, King George VI. On the 20th November 1947, the royal couple exchanged their vows in Westminster Cathedral in a ceremony which reminded the country and commonwealth of the days before the Second World War, which had taken the lives of so many. The wedding was regarded as just what the country needed to lift their spirits. Now having reached the milestone anniversary of 70 years of marriage, the Queen and the Duke of Edinburgh hold the distinction within the royal family of being the longest-married British sovereign and consort. 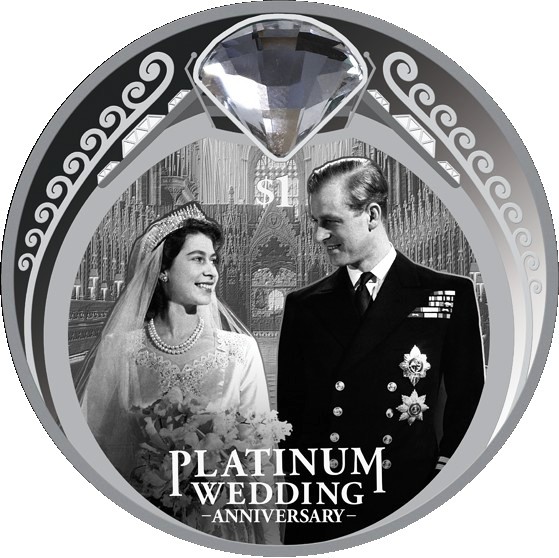 The coin is produced by the Numiscom GmbH & Co. KG, on behalf of the Reserve Bank of New Zealand, and is designed by Jonathan Gray of New Zealand Post Ltd, Wellington, New Zealand. The reverse side shows the royal couple as they were photographed on their wedding day. The image is framed by an illustration replicating the Queen’s platinum engagement ring. The central three-carat diamond is represented by a sparkling Swarovski crystal. The koru — a stylised New Zealand fern-leaf motif well-known in Māori carving — encircles the coin and represents four generations of the royal family. 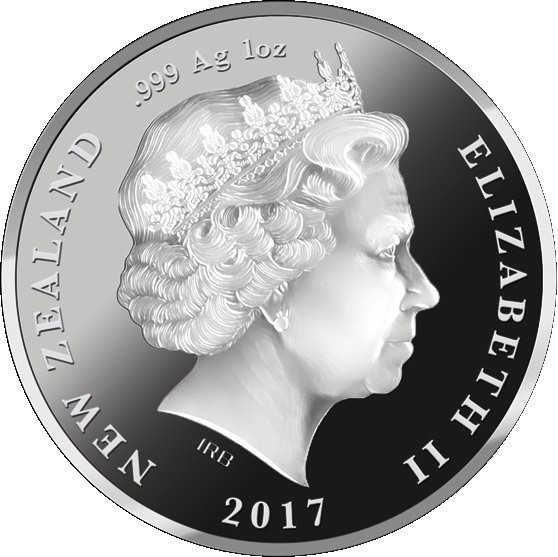 The obverse depicts HM Queen Elizabeth II, as designed by British sculptor Ian Rank-Broadley, and has appeared on all New Zealand circulation and most commemorative coins since 1999. 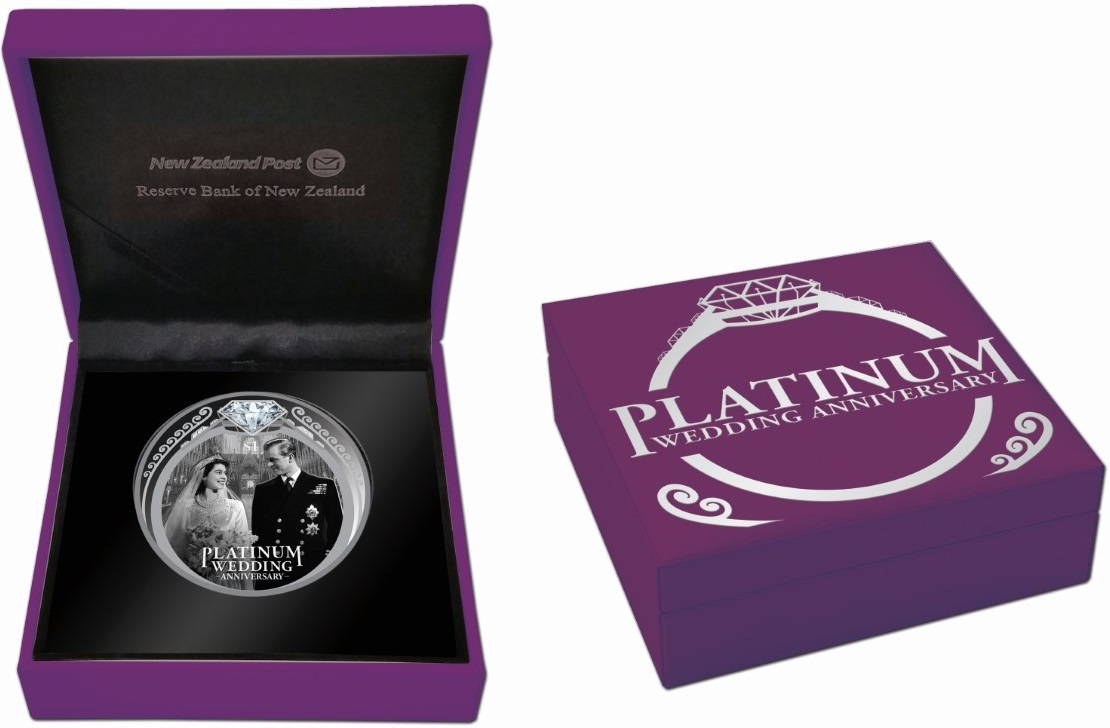 The coin is encapsulated and presented in a custom, purple-coloured case with a certificate of authenticity. For more information on this and other coins issued by the Reserve Bank of New Zealand, please visit the website of the New Zealand Post, official and worldwide distributors of New Zealand collector coins.