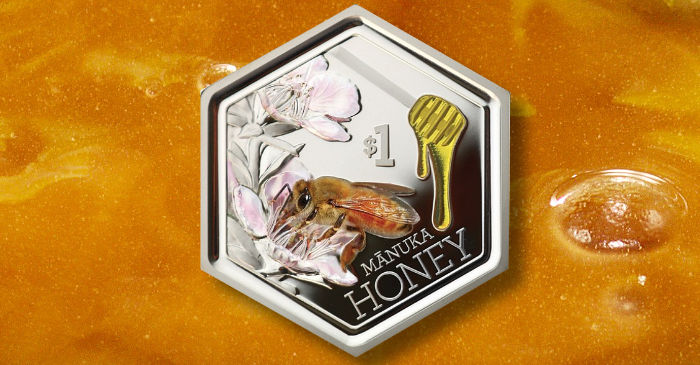 The Reserve Bank of New Zealand have unveiled (13th February) their second collector coin which focuses on the country’s lucrative honey industry. Following on the huge success of the Reserve Bank’s release of their first honey bee coin last year, a second coin is to be issued which features the golden nectar from the mānuka honey bee and its extraordinary product.

The mānuka story dates back to pre-European times when the Māori peoples discovered its usefulness not only as a source of timber but also as an effective medicinal ingredient for treating burns, wounds, and ailments. Its hard, red wood was used to make paddles or spears and was central in the construction of shelters. Its bark was turned into containers, and the inner bark was used to waterproof roof structures. Prior to the arrival of European settlers, honey wasn’t common or sought after as a specific product, but its healing powers were still widely known. The bark was used in various remedies to treat burns and was an effective sedative. Ash could be rubbed into the skin to treat irritations and diseases, and the vapour produced from boiling the leaves helped to ease the symptoms of a cold.

Fast-forward to the settlers’ arrival, attempts at producing mānuka honey were largely unsuccessful owing to its strong, bitter taste, but as recently as the 1980s everything changed. Research supported the benefits of consuming mānuka honey and using it on irritated skin and wounds. Rather than avoiding the common mānuka shrubs and trees, beekeepers are now placing their hives in areas that are densely populated by the fragrant, native plant. The honey bee (Apis mellifera) combined with a mānuka blossom flower (Leptospermum scoparium) has, for many, produced an unbeatable combination. The sturdy shrub which the blossom is found usually grows up to around five metres (16 feet) in height but is able to stretch out into a small tree of around 15 metres (more than 49 feet) if given the chance. Although there is no way to encourage bees to go specifically to mānuka flowers, placing the hives nearby does mean that there is likely to be a higher concentration of mānuka in the final honey product.

Today, mānuka honey is earning New Zealand about NZ$190 million ($138 million USD) a year in export revenue. While its uses are many and varied, its particular ability to relieve pain and suffering has made it highly sought after by people all over the world. 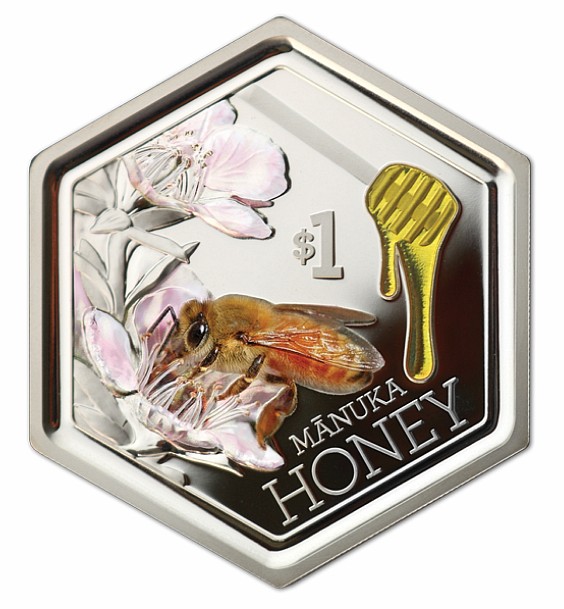 The collector’s coin is produced by the B.H. Mayer’s Mint GmbH at their facilities in Bavaria, Germany, and is designed by Jonathan Gray of the New Zealand Post. The hexagonal shape has been used again as it represents honey bees and the actual honeycombs they use for storage. Coloured resin is used to depict the rich, golden colour of mānuka honey, and can be seen dripping from a wooden dipper. A digitally printed honey bee is perched on a whitish-pink mānuka flower. Other engraving techniques give further depth to the coin’s detailed design. 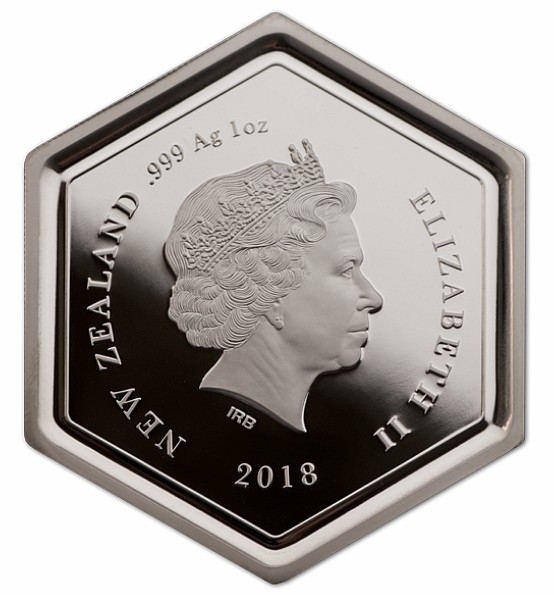 The obverse side depicts HM Queen Elizabeth II, as designed by Ian Rank-Broadley. This effigy has been used on all circulation and many collector and commemorative coins of New Zealand since 1999. 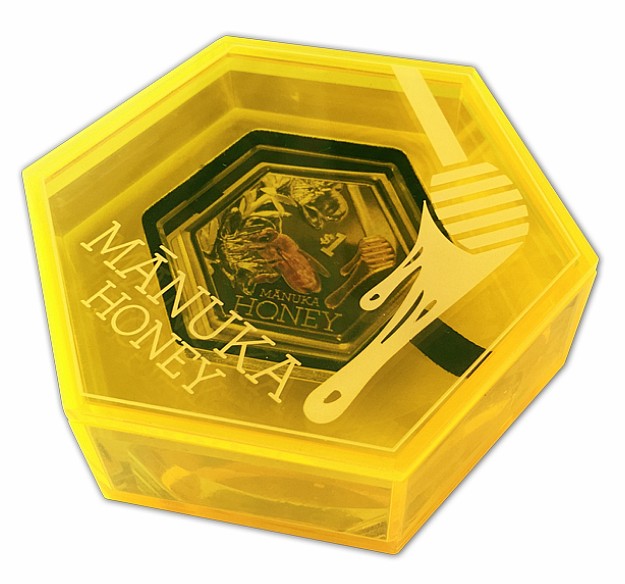 Each coin is encapsulated and presented in a custom designed hexagonal case replicating the colour of mānuka honey which also includes a unique numbered certificate of authenticity. The coin will be available in March 2018, and the New Zealand Post, the official retailers of collector coins issued from the Reserve Bank, are strongly advising collectors to reserve their coin as soon as possible. For additional information on this coin, please visit the website of New Zealand Post.