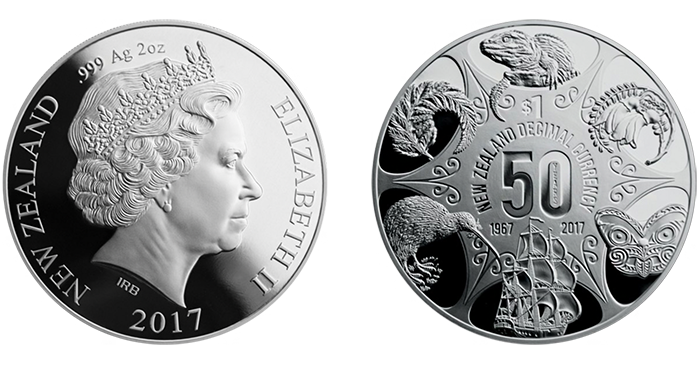 The Reserve Bank of New Zealand have launched (9th June) an exquisite new silver double crown coin to mark the country’s 50th anniversary of decimalisation, which officially took place on the 10th July 1967. The newly introduced New Zealand dollar replaced the New Zealand pound, distinct from the pound sterling which had been the legal tender in the country since 1933.

The reverse designs that were finally settled on for the decimal coins had been created by New Zealander James Berry. His designs—which included a silver fern (1¢), kowhai (2¢), tuatara (5¢), Māori carved head, or kōruru (10¢), kiwi (20¢), and HMS Endeavour (50¢)—were chosen from a wide selection of submissions. The three smallest denominations were eventually withdrawn and the design for the 20¢ coin was changed in 1990, but his 10¢ and 50¢ coin designs remain in use today. 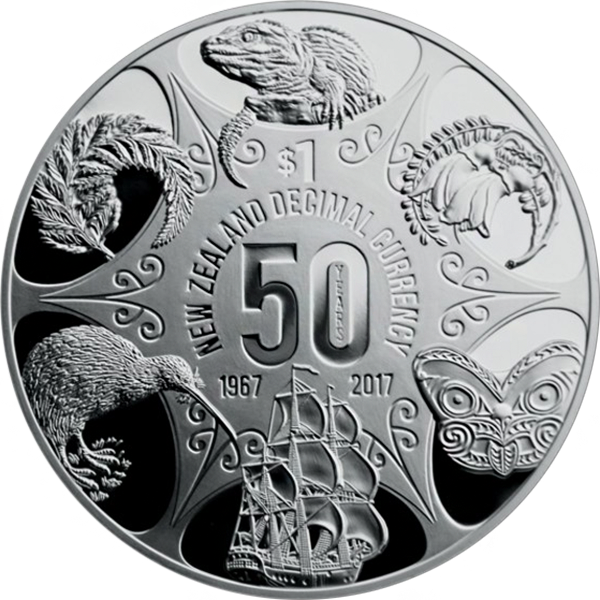 The double crown coin is produced by the BH Mayer’s Kunstprägeanstalt GmbH, Germany, on behalf of the Reserve Bank of New Zealand. The reverse motif includes elements of all six of the iconic New Zealand symbols that were used in James Berry’s original designs on the denominations from the 50¢ to the 1¢ coins. These original designs are arranged by Jonathan Gray (New Zealand Post, Wellington) around the perimeter of the coin and encompassed by delicate koru designs. At the center is a large number 50, with the word YEARS arranged vertically in small type within the zero. This is surrounded by the legend NEW ZEALAND DECIMAL CURRENCY, with the denomination $1 above and the dual dates 1967 and 2017 below, to either side of the Endeavor’s sails.

The obverse includes an effigy of HM Queen Elizabeth II which was created by British sculptor Ian Rank-Broadley and has been used on all circulation and many commemorative coins from New Zealand since 1999. The Queen’s portrait is surrounded by the words NEW ZEALAND at left and ELIZABETH II at right, with the date of issue, 2017, below. In small type above the portrait are the coin’s fineness, metal, and weight, as .999 Ag 2oz (or 1oz). The designer’s initials, IRB, appear just below the base of the portrait.

The 2-ounce anniversary coin is presented in a premium, dark wooden box with silver detailing on the lid along with certificate of authenticity and is available as a separate item. A 1-ounce version is also available, but only as part of a Proof set that includes Proof versions of all of New Zealand’s currently circulating coins: $2, $1, 50¢, 20¢, and 10¢. 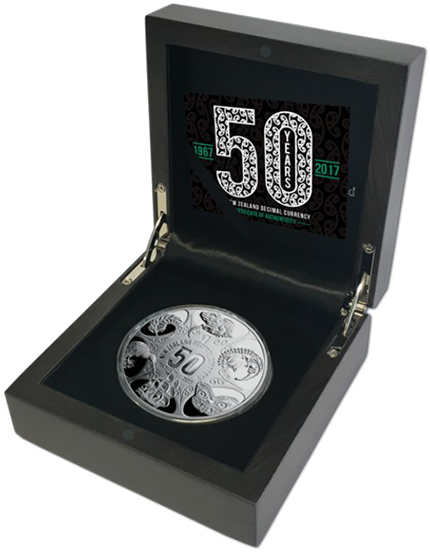 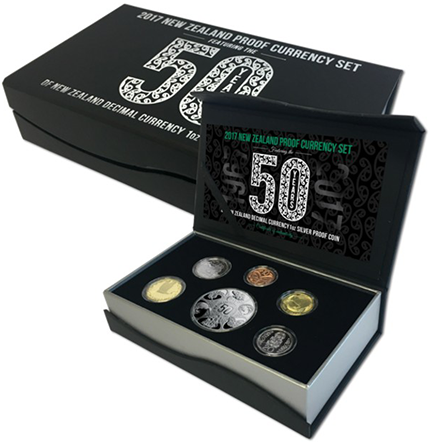 The Proof set, which contains the 1-ounce version of the 50th-anniversary double crown and Proof versions of each of New Zealand’s circulating coins.

Please visit the website of the New Zealand Post, official distributors for the Reserve Bank of New Zealand, for more information on this and other coins issued by the bank.

New Zealand’s pound was a holdover from British colonial rule and was divided into 20 shillings, with one shilling divided into 12 pence. This meant there were 240 pence to one pound, and although the government of New Zealand had contemplated a changeover to decimal currency since the 1930s, it was not until the 1950s that the proposal finally gained momentum. By that time, the currency legacy inherited from the United Kingdom was considered complicated and cumbersome, according to a committee which was set up by the government to investigate decimal currency in 1957.

By 1963, the government made a final decision to decimalise the currency of New Zealand, and in 1964 passed the Decimal Currency Act which also included a firm date for the transition. The date for this would be the 10th July 1967, which would accord the government and Reserve Bank three years to organise the significant change to the country’s economy. But first—what would actually replace the pound?

The assumption that a New Zealand dollar would replace the New Zealand pound had been routinely mentioned and referenced, and the exchange rate between the pound and a decimal unit was already being publicised. However, the question was still open to suggestion, and proposals to call the unit the fern, the kiwi, and the zeal were on the table (as many sought to avoid confusion with the world’s more well-known dollar from the United States). As part of the public-awareness campaign to promote the upcoming New Zealand dollar and the set exchange between the two currencies, a cartoon character by the name of “Mr. Dollar” made his debut and became the symbol of transition in what would grow into a huge publicity campaign.

The fixed rate of two New Zealand dollars per New Zealand pound was primarily the focal point of the publicity campaign, and as part of the transition and preparation, just over 27 million new banknotes were printed in denominations of $1, $2, $5, $10, $20, and $100. In addition, 165 million new coins were minted in denominations of 50¢ to 1¢. The country had three years to become accustomed to the new dollar currency, with its double pricing for goods and services in shops and a very comprehensive public awareness campaign. The colourful new dollar banknote series featured a regal image of Queen Elizabeth II on the face, replacing that of Captain James Cook who was seen on the last pound series of notes.

The new series of coins, produced by the Royal Australian Mint, included the Arnold Machin effigy of the Queen, which differentiated the previous coins from the new. Dimensions of the new coins were carried over from three of the old ones, with the 2-shilling coin becoming 29 cents, the 1-shilling coin being re-issued as 10 cents, and the old sixpence coin becoming a new 5-cent coin. New 2- and 1-cent coins were issued in copper, and a 50-cent coin was issued. Slightly smaller than the previous half crown, it depicted an inspiring image of the ship HMS Endeavour, which was a British Royal Navy research vessel that Lieutenant James Cook commanded on his first voyage of discovery to Australia and New Zealand, from 1769 to 1771. As a reminder of the exchange rate of the new dollar currency, the 10-cent coin included the dual denominations of “One Shilling 10 cents” until 1970. 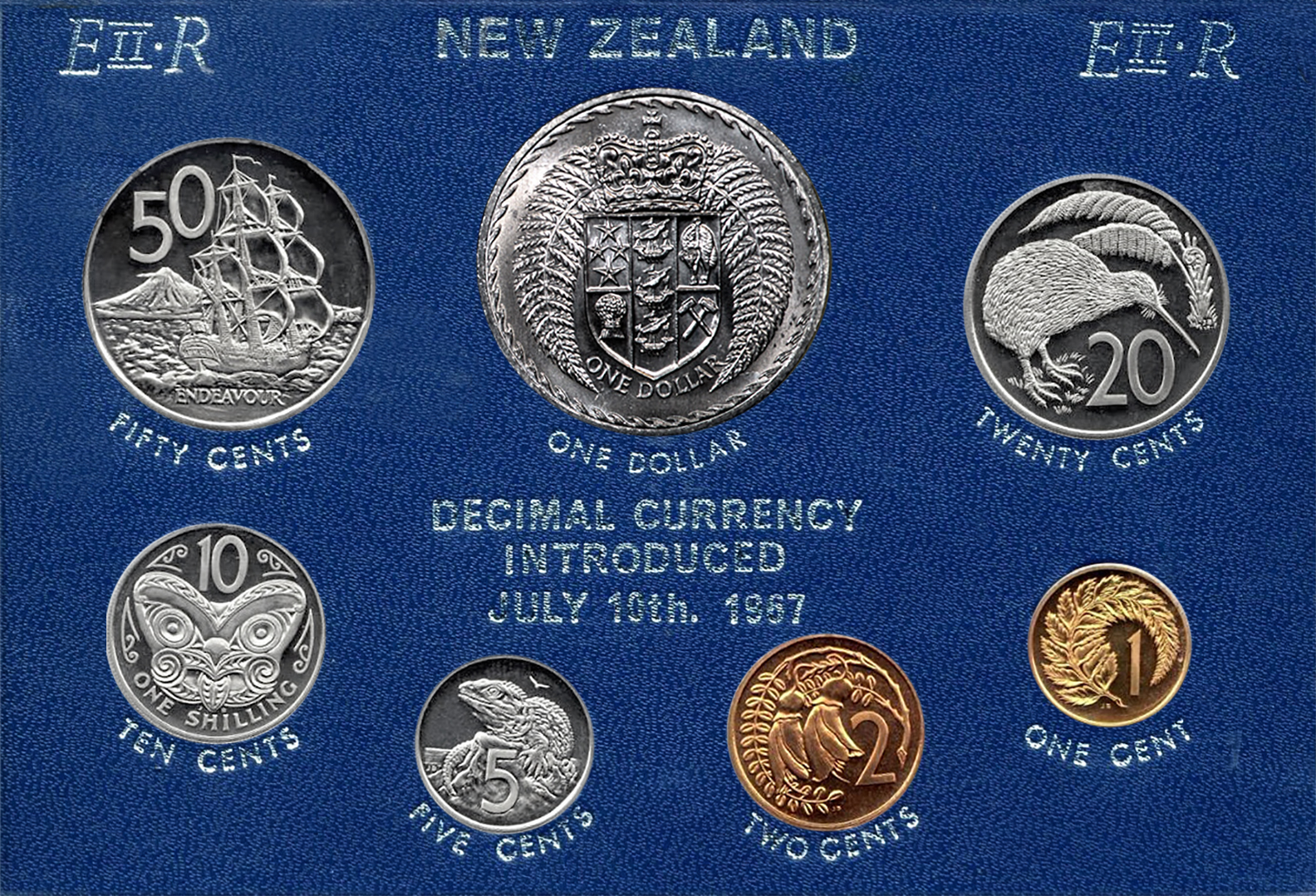 New Zealand’s changeover (or “D-Day,” as it was referred to) denoting the new decimally denominated money was considered a great success, with few problems reported and many New Zealanders commenting they preferred the new simplified system to the old pounds-shillings-pence legacy currency. The experiment in a currency changeover was closely watched in the United Kingdom, as the very country who exported the £-s-d system of commerce were themselves in the midst of announcing their own “D-Day” that would eventually arrive in February 1971. Over the years, the coins and banknotes of New Zealand have continued to evolve with some of the coins being removed from circulation (the 1-, 2-, and 5-cent pieces) and the addition of new denominations. In 1990, the Reserve Bank introduced new $1 and $2 coins in an effort to replace the banknotes of the same value. Both coins are made from an alloy of aluminium and brass, giving them a golden colour. Since the reverse design of the new dollar coin included a kiwi, the reverse of the 20-cent coin was re-designed to avoid any confusion. In 2006, a significant change was made to the original and remaining denominations when the 10-cent coin was reduced in size and minted in copper-plated steel. The 20- and 50-cent coins also saw reductions in their diameters and weights, with the 20 cents undergoing a change in shape from round to scalloped edge.

New Zealand also became a trail-blazer in terms of becoming only the second country in the world to transition from paper banknotes to polymer in 1999. From 2015 to 2016, a second series of polymer notes were introduced which depicted the same designs but with more vivid colour variations and more sophisticated security features.   ❑