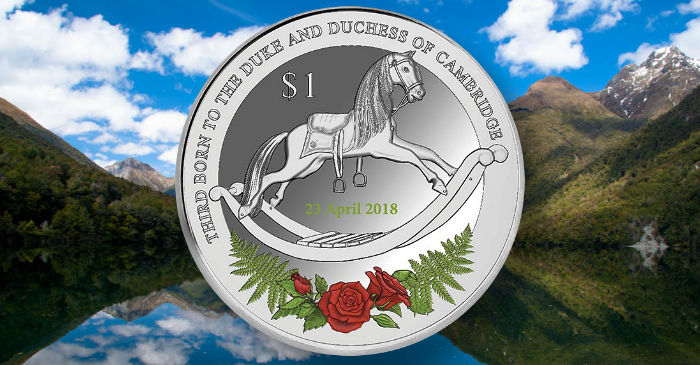 The Reserve Bank of New Zealand has unveiled (4th May) new silver collector coins which are minted in celebration of the recent birth of the third child of William, Duke of Cambridge, and Catherine, Duchess of Cambridge. The young prince’s name in full is His Royal Highness Prince Louis Arthur Charles of Cambridge. He was born at 11:01 in the morning at St. Mary’s Hospital, Lindo Wing, on Praed Street, Westminster, on the 23rd April 2018. His mother the Duchess of Cambridge arrived in the early morning hours on the same day and, having had a safe delivery, the royal couple brought their son home just 12 hours after arriving at the hospital. He was reported to have weighed eight pounds and seven ounces on the day of his delivery. With the announcement made to the Queen just minutes after the baby’s birth, Buckingham Palace displayed the announcement of the new Prince’s birth on the gates of the Palace — according to long-standing tradition. The little Prince is Her Majesty the Queen’s and His Royal Highness, the Duke of Edinburgh’s, sixth great-grandchild and the third grandchild of His Royal Highness, the Prince of Wales, and the late Diana, Princess of Wales (1961–1997).

According to the current law of succession, which was approved in 2013 by the Queen in addition to the British and Commonwealth governments, Prince Louis is fifth in the line to the British and 15 other realms. He is behind his grandfather the Prince of Wales, his father the Duke of Cambridge, his older brother Prince George, and older sister Princess Charlotte — who celebrated her third birthday just seven days after the arrival of her little brother. 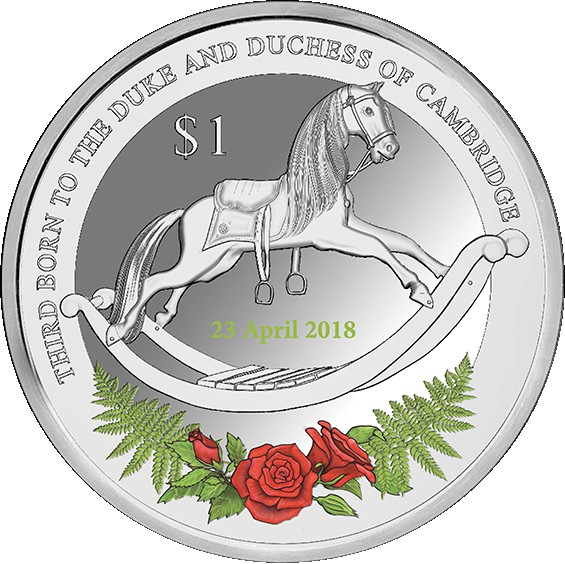 The coin is produced by the Mint of Norway at their facilities in Kongsberg, on behalf of the Reserve Bank of New Zealand, and is designed by Saint Andrew Matautia of New Zealand Post. These intricately detailed silver Proof coins reflect the close relationship that New Zealand has with the monarchy, as Queen Elizabeth II is the country’s head of state and New Zealand is a member of the Commonwealth of Nations. The centre design depicts a royal family heirloom, a rocking horse that once belonged to Princess Margaret (1930–2002), the younger sister of the Queen. Beneath the rocking horse on the rim of the coin is the English rose combined with the New Zealand fern. Part of the design also features the baby’s date of birth 23 APRIL 2018. The face value of $1 is placed above and to the left of the rocking horse. 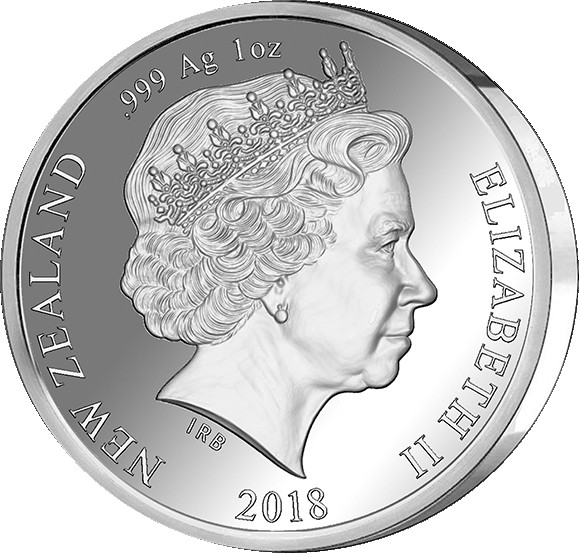 The obverse includes an effigy of HM Queen Elizabeth II created by sculptor Ian Rank-Broadley and has been used on all circulation and many commemorative coins of New Zealand since 1999. The year of issue, 2018, is placed below the Queen’s portrait.

The coin is available by placing a pre-issue order and the final mintage will be determined by the number of pre-orders received. For additional information for this coin and others issued by the Reserve Bank of New Zealand, please visit the website of New Zealand Post.