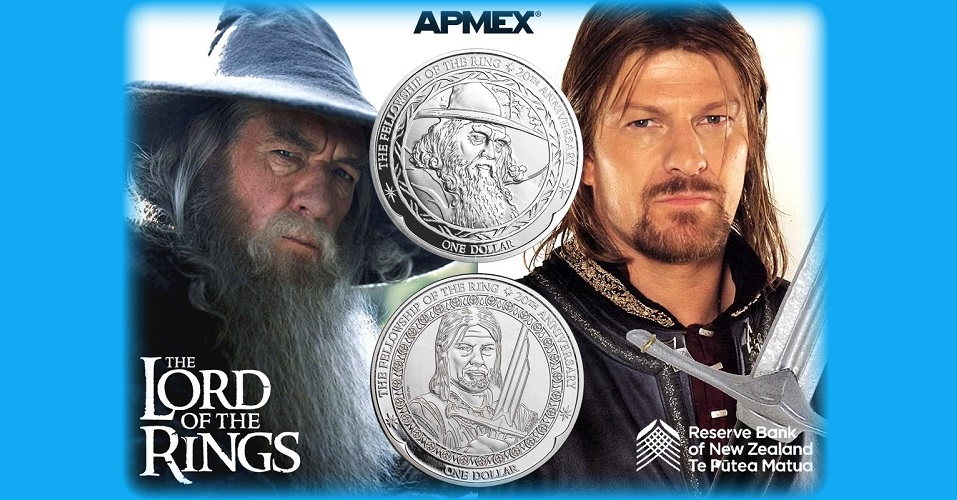 The Reserve Bank of New Zealand has released two new designs which form part of the range of silver collector and bullion coins celebrating the 20th anniversary of the blockbuster The Lord of the Rings: The Fellowship of the Ring.

December 2021 marked 20 years since the release of this epic film, which was a fantasy story of epic proportions. The film invited a new generation into the world of J.R.R. Tolkien’s beloved mid-century novels.

The Lord of the Rings trilogy was filmed entirely in New Zealand, whose unique landscapes provided a bounty of spectacular scenery. One of modern cinema’s greatest achievements, the film earned 13 Academy Award nominations and grossed U.S. $ 897.7 million worldwide, putting New Zealand on the map as a beautiful place to visit and a brilliant location for filmmaking. The Fellowship of the Ring was followed in 2002 by The Two Towers and in 2003 by The Return of the King.

The two coins are produced by the Sunshine Minting Inc. at their facilities in Idaho, United States, and are designed by Sacha Lees from Wellington. 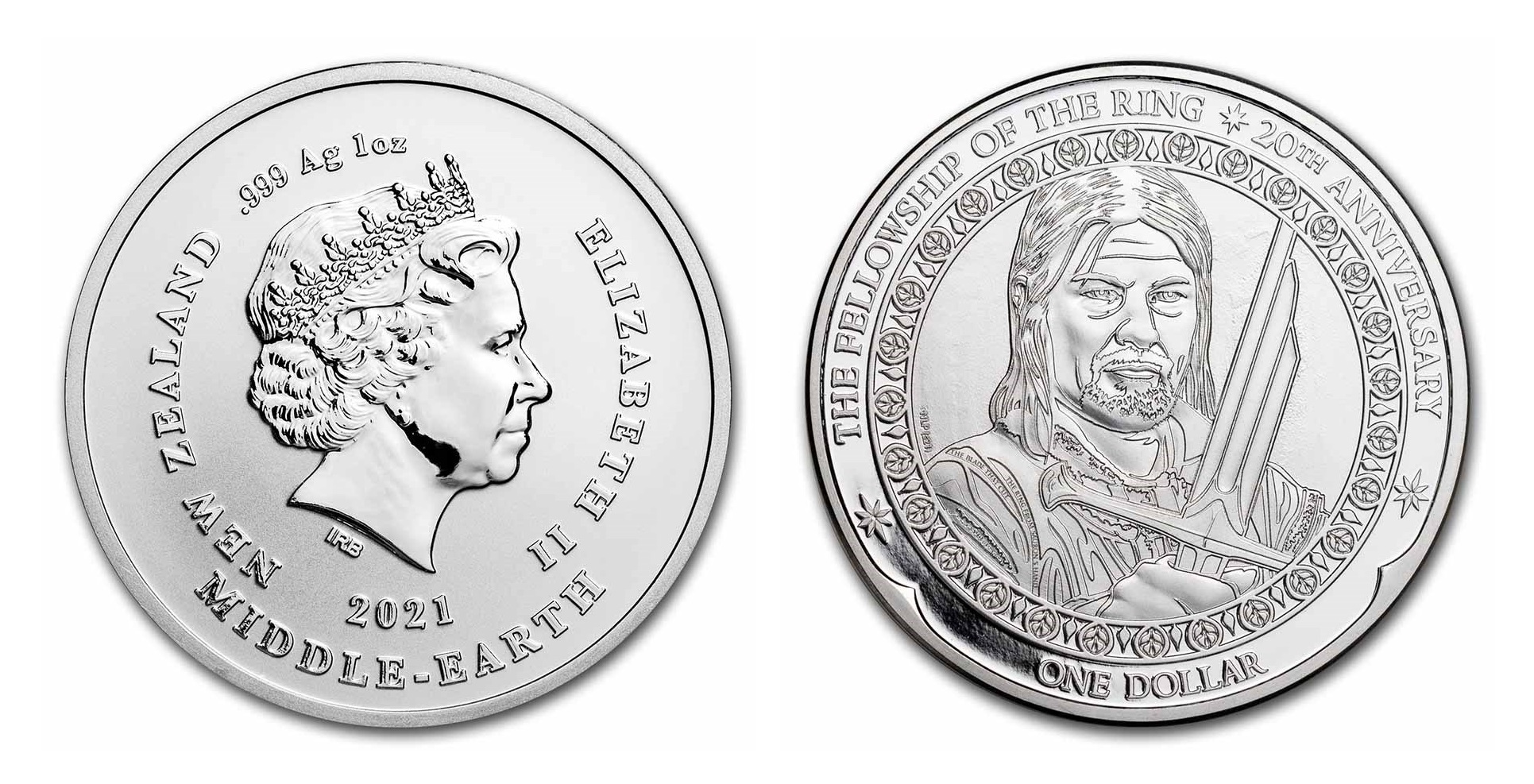 Boromir: The reverse of the first coin features an image of Boromir holding a broken blade. Near his shoulder in his clothing are the words in micro-text THE BLADE THAT CUT THE RING FROM SAURON’S HAND. Around the edge of the coin are the inscriptions THE FELLOWSHIP OF THE RING and 20TH ANNIVERSARY. Below the primary design is the coins’ denomination of ONE DOLLAR. 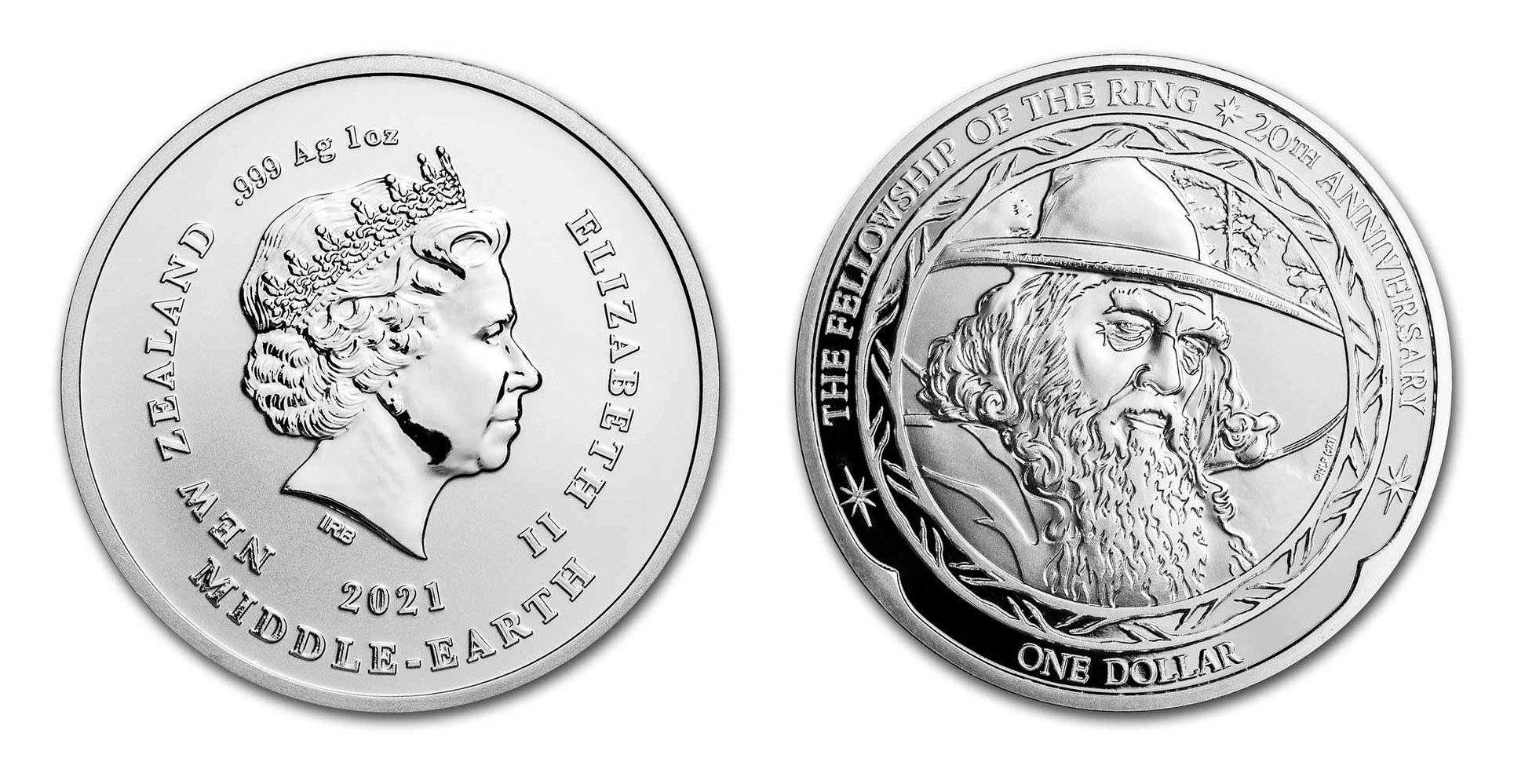 Gandalf: The reverse of the second coin features a close up image of Gandalf. Along the edge of the brim of his hat are the words in micro-text A WIZARD IS NEVER LATE. NOR IS HE EARLY. HE ARRIVES PRECISELY WHEN HE MEANS TO. Around the edge of the coin are the inscriptions THE FELLOWSHIP OF THE RING and 20TH ANNIVERSARY. Below the primary design is the coins’ denomination of ONE DOLLAR.

Both coins include an effigy of HM Queen Elizabeth II created by British sculptor Ian Rank-Broadley. Included around the Queen’s likeness are the inscriptions NEW ZEALAND, the year of issue 2021, and the fineness and weight of the coin. Below the effigy is the additional text MIDDLE EARTH, acknowledging the fictional location of J.R.R. Tolkien’s novel.

Multiples of 20 coins are packaged in heat-sealed rolls. All other coins are sold in protective capsules. The full range of three bullion coins celebrating the 20th anniversary of The Lord of The Rings: The Fellowship of the Ring have been produced in an exclusive partnership with APMEX. International customers may order from APMEX’s website.

Domestic customers in New Zealand can contact New Zealand Post as a small number of coins, including Proof collector versions, are available here.