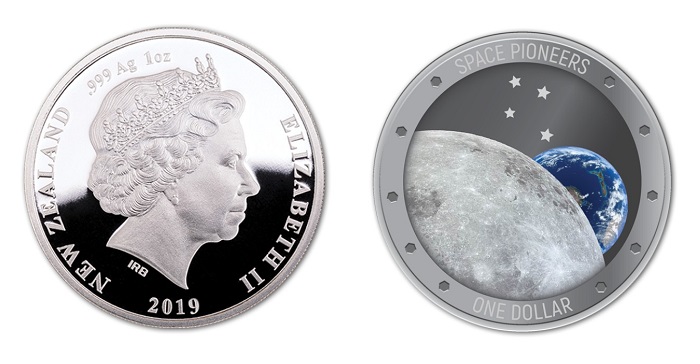 The Bank of New Zealand has issued new silver Proof coins as part of the world’s observance of an incredible human achievement occurring 50 years ago, and remarkably, just 66 years after the first airplane flight. The landing of the first man on the Moon by United States astronauts is considered one of the greatest human achievements ever undertaken. In the countdown to the historic Moon walk of 1969, when people throughout New Zealand abandoned their office and school desks to gather around radios and television sets to listen to and see the live broadcast. At 2:56 p.m., New Zealand time, on the 21st July, time stood still as American astronaut Neil Armstrong became the first human to set foot on the Moon’s surface. His famous words were broadcast from the surface of the Moon to Earth:

That’s one small step for [a] man, one giant leap for mankind.

Perfectly positioned under the centre of the Milky Way, New Zealand has produced a few of its space pioneers. In the early 20th century, Charles Gifford’s scientific evidence showed the Moon’s craters were created by collisions with meteorites, while active astronomers Alan Gilmore and Pamela Kilmartin identified near-Earth asteroids. Albert Jones catalogued more than half a million variable stars and co-discovered a supernova using only his eyes and a telescope. Sir William Pickering, a rocket scientist, pioneered the exploration of space, while Beatrice Hill Tinsley made breakthrough discoveries on how galaxies evolve. Half a century on from the American Apollo 11 mission, New Zealanders can reflect proudly on their nation’s achievements in the context of this giant leap.

The Proof and colour coins are produced by B. H. Mayer’s Mint GmbH at their facilities in Bad Wurttemberg and are designed by Hannah Fortune, New Zealand Post, Wellington, New Zealand. 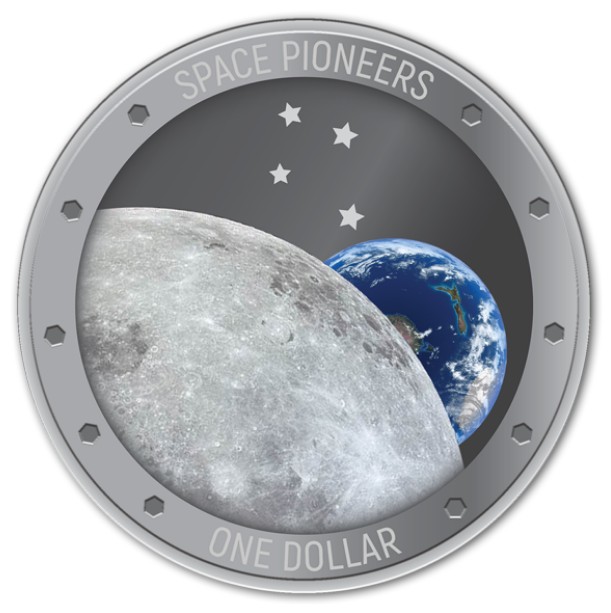 The reverse side of the coins depicts a view of Earth from behind the Moon. The islands of New Zealand are visible and above the primary motif is the Southern Cross constellation, in a nod to the stars on New Zealand’s flag. The rim of the coin is designed to look like the inside of a space module station window or porthole. The text on the rim of the coin and the Southern Cross are raised and mirrored; the moon has a pitted 3-D-like texture. The background is recessed to create depth. 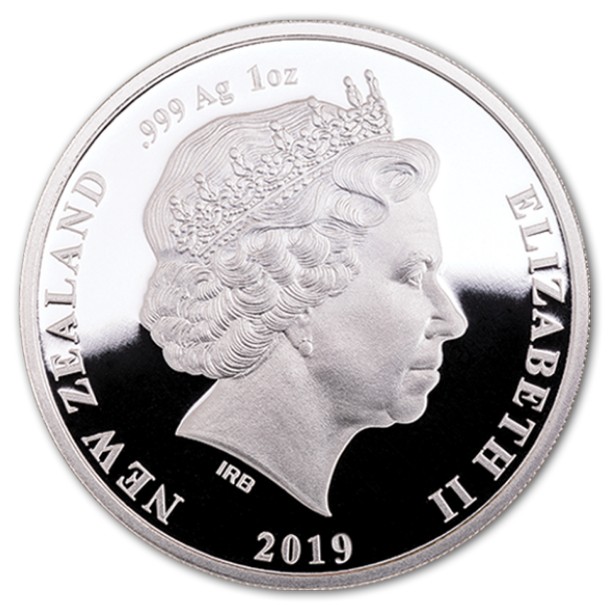 The obverse side includes an effigy of HM Queen Elizabeth II designed by noted British sculptor Ian Rank-Broadley, which has been included on all New Zealand circulation and many commemorative coins since 1999. The year of issue is seen below the Queen’s likeness.

The coin is encapsulated and housed in a custom presentation case, accompanied by a numbered certificate of authenticity. For additional information about this coin and others issued by the Reserve Bank of New Zealand, please visit the website of the New Zealand Post.