On November 1, the Reserve Bank of New Zealand unveiled the final images for their 2017-dated “Kiwi” range of gold and silver bullion coins. Following on from the 2015 and 2016 Kiwi coins, the design features the Rakiura (Stewart Island) tokoeka, which is the only one of New Zealand’s five kiwi species that is active during the daytime. (New Zealand’s endangered kiwis are discussed below the specifications chart.) Kiwis feature prominently on many New Zealand issues, including this unusual cut-out coin of 2015.

The coins are produced by the BH Mayer’s Kunstprageanstalt GmbH on behalf of the Reserve Bank of New Zealand. The reverse design, which depicts the Rakiura foraging on a sand dune, incorporates the time of day when the sun is about to meet the horizon and the Rakiura begins to become active. The denomination is seen just below the primary design along the lower rim. At the top is the common name, RAKIURA TOKOEKA, in bold letters, with the Latin or scientific name of the species, APTERYX AUSTRALIS LAWRYI, just below, against the field of the setting sun. 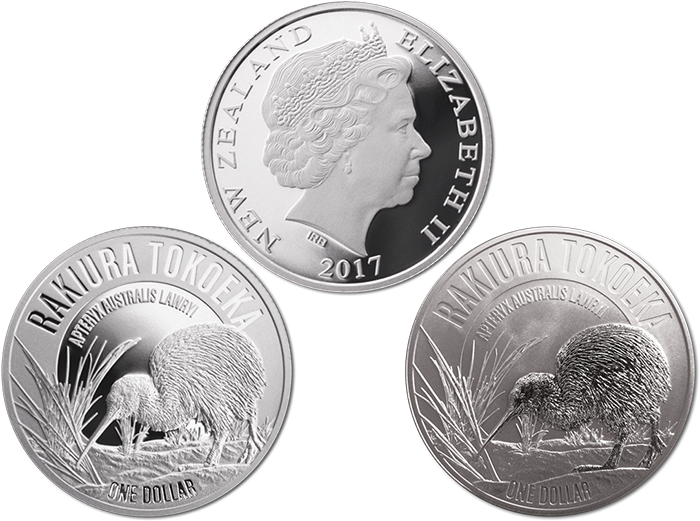 The obverse side includes the familiar effigy of HM Queen Elizabeth II as designed by Ian Rank-Broadley and used on New Zealand coinage since 2000. The year of issue, 2017, appears below the effigy.

This is the third year for the popular Kiwi series, which consists of three coins: a premium 1/4-ounce gold coin, a 1-ounce silver Proof coin, and a 1-ounce silver Specimen coin with a Reverse Proof look. The date for the release of this new series has not yet been officially announced, but New Zealand Post are preparing for a date toward the end of November. For updates on the 2017 Kiwi bullion coins, visit the website of the New Zealand Post, authorized distributors of Reserve Bank of New Zealand coins. International sales dispatched where applicable. 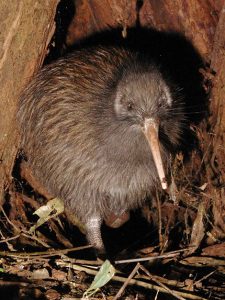 The kiwi is a quirky and unique bird and has long been considered the mascot or national bird of New Zealand, but despite the country’s best conservation efforts, its numbers continue to decline year on year. Kiwis are mostly nocturnal, omnivorous birds whose closest living relatives are the Australian cassowary and emu, and like them, it cannot fly. The kiwi’s loose, hairlike feathers, long beak, and large whiskers give it a scruffy but endearing appearance. The kiwi has been a frequent subject of New Zealand Post’s commemorative coins since 2004, and for many collectors of New Zealand coinage, they have proven to be a favorite subject. Five species of kiwi are found across New Zealand: the brown kiwi (Apteryx mantelli), great spotted kiwi / roroa (Apteryx haastii), little spotted kiwi (Apteryx owenii), the rowi (Apteryx rowi), and the tokoeka (Apteryx australis). All five species are endangered and require various conservation efforts to sustain their small populations. All kiwis have the distinction of laying one of the largest eggs in the world in relation to its body size.

The New Zealand Department of Conservation has more about the kiwi species, including sound recordings.