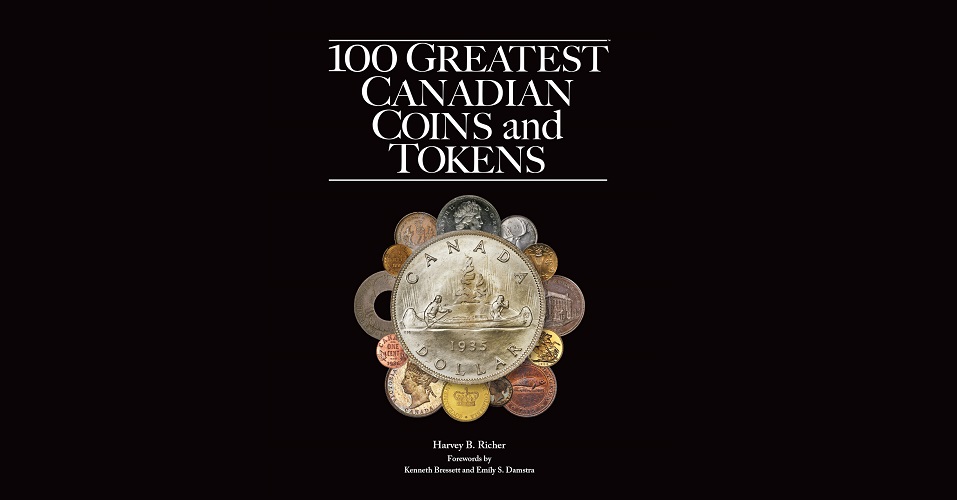 A new Whitman Publishing book, 100 Greatest Canadian Coins and Tokens, by Dr. Harvey B. Richer, will debut in July 2022 at the annual convention of the Royal Canadian Numismatic Association, in Ottawa. The 160-page hardcover coffee-table volume will be available from bookstores and hobby shops and online (including at Whitman.com). Here, Whitman publisher Dennis Tucker discusses how the book came to be, and its context within Whitman’s focus on Canadian numismatics.

Collectors in Ottawa, Ontario, will be among the first to see Dr. Harvey Richer’s new book, 100 Greatest Canadian Coins and Tokens, as it takes its place among nearly 75 years of related Whitman Publishing books and hobby supplies.

The publishing company, while headquartered in Racine, Wisconsin, began an extensive lineup of Canadian coin folders in 1950. Meanwhile, up in Toronto, James E. Charlton was self-publishing his Catalogue of Canadian Coins, Tokens & Fractional Currency. In 1959 R.S. Yeoman, father of Whitman’s popular Guide Book of United States Coins (the “Red Book”), approached Charlton to publish his book and distribute it in the United States. Yeoman tripled the page count and expanded the content, and sales reached 100,000 copies per year in the 1960s. In the same era, Whitman also published the Standard Grading Guide to Canadian Decimal Coins, distributed a “Canadian Coin Hobby Starter Kit,” and offered hobbyists a checklist and record book to keep track of their collections. 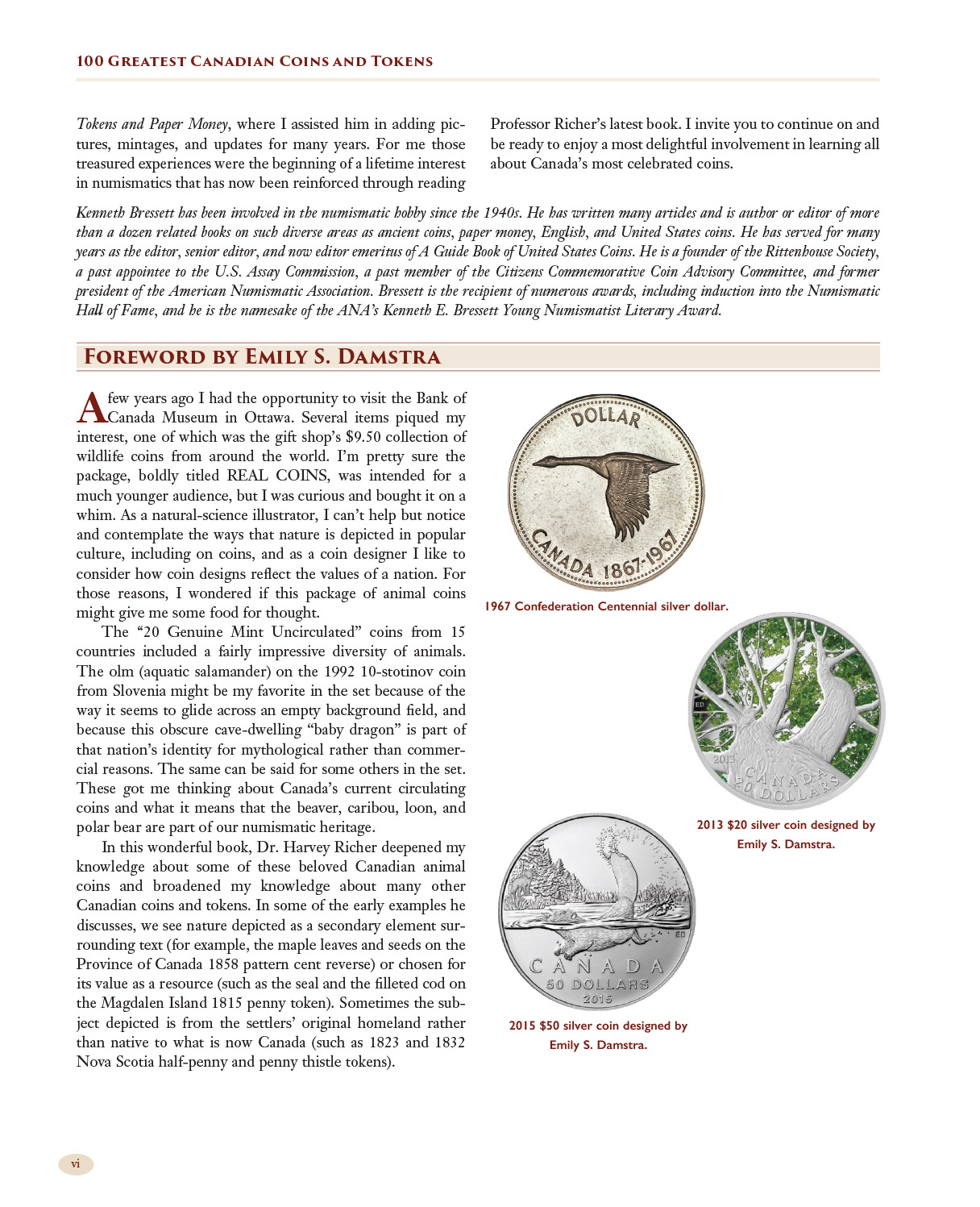 In the 1970s Robert C. Willey and James A. Haxby pioneered the modern study of Canadian coins in a new Whitman book, Coins of Canada. Willey (1927–1993), of Saskatchewan, was well established as a numismatic researcher and writer. Haxby was known for his authoritative papers on die-making and his scholarship in Canada’s decimal coinage. Their book was groundbreaking. Whitman published it into the early 1980s.

In 2003 Q. David Bowers joined Whitman as the company’s numismatic director, and in 2004 I took the role of publisher. Clifford Mishler, former president of Krause Publications (and a Whitman author himself), introduced me to James Haxby in 2007. From this renewed partnership came a modern era of Whitman activity in Canadian coinage. We planned a brand-new, 464-page Guide Book of Canadian Coins and Tokens—a full-color illustrated history, price guide, and reference book that was published in 2012. Whitman also updated its Canadian coin folders, for large cents through modern dollars and Toonies. 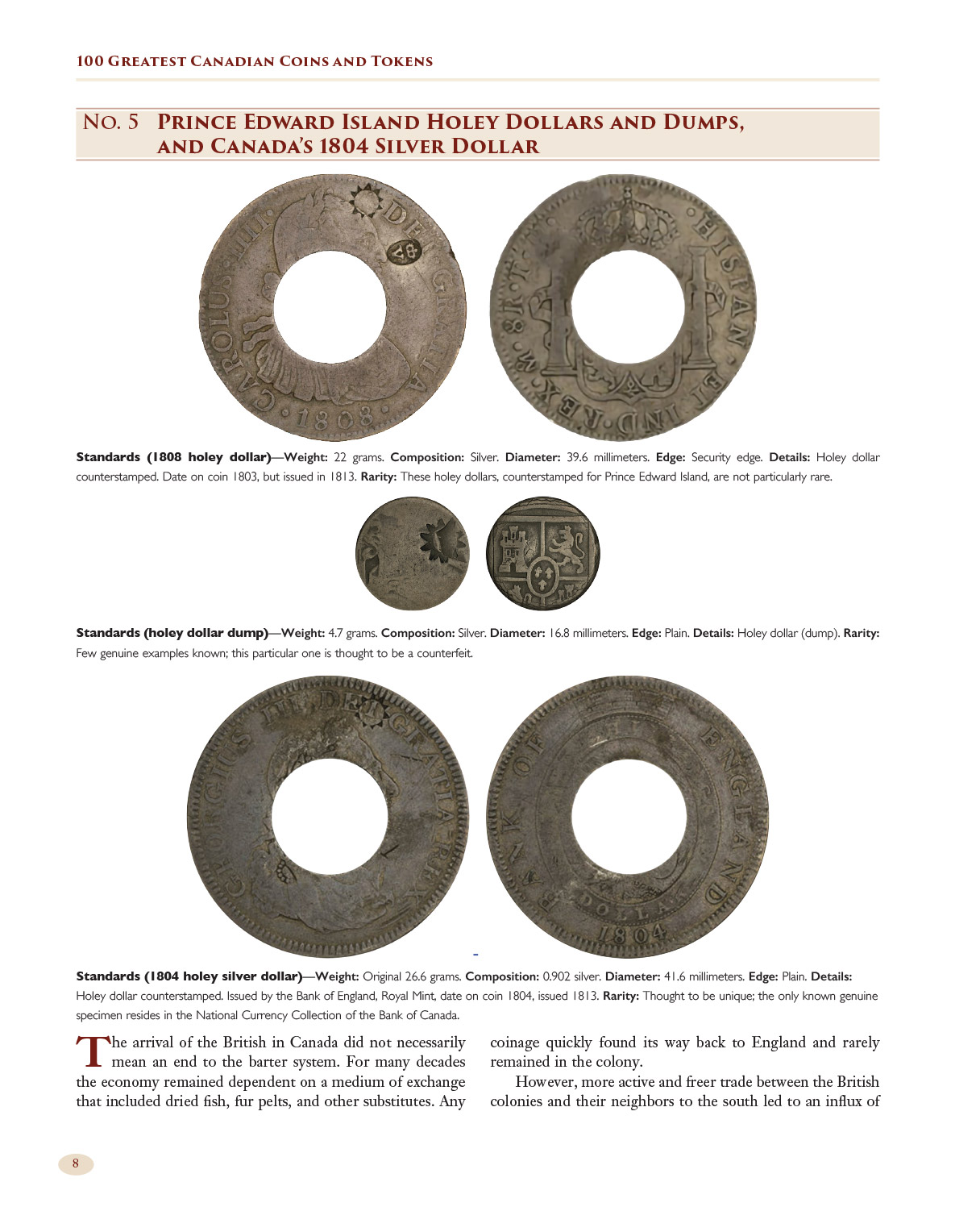 The book includes coins and tokens from among the early money of Canada; pre-Confederation and related coinage of Canada and the Provinces; the coins of Newfoundland; coins of the Victorian era; coinage of the reigns of Edward VII, George V, George VI, and Elizabeth II; Canadian gold coins; and more.

In 2017 Boulder Publications released Harvey B. Richer’s excellent Gold Coins of Newfoundland, 1865–1888, subtitled How Newfoundland Came to Possess a Spectacular Mintage of Gold Coins. Part of what made Gold Coins of Newfoundland such a remarkable book was Dr. Richer’s talent as a writer and a teacher, as well as his approach to numismatics. He began his study with the formation of the solar system, moved into continental drift and a theory of a geographical connection between Britain and Canada, and then a summary of 9,000 years of Newfoundland history! With this fascinating background, Richer led up to the minting of Newfoundland’s gold coins.

“One aspect I was particularly interested in,” he later told me, “was the effect such a magnificent issue of coinage had on the Newfoundland population 150 years ago. Recall that this was a very poor society largely driven by fishing and seal hunting. What was the impact of the coinage on commerce, on how the Newfoundlanders viewed themselves?” 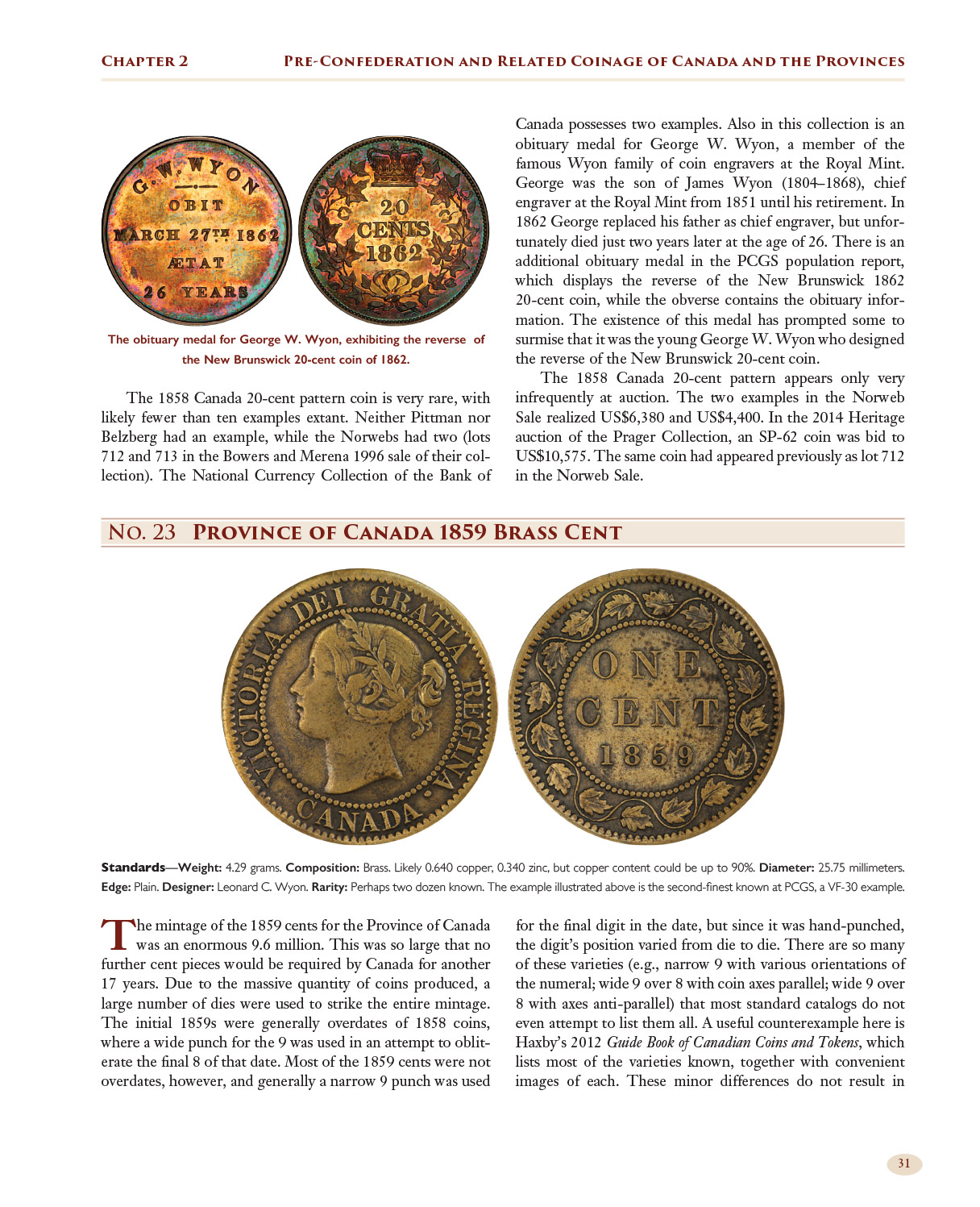 The Province of Canada, Nova Scotia, New Brunswick, British Columbia, Prince Edward Island, Newfoundland, and the Dominion of Canada are all represented among the 100 Greatest.

I met Dr. Richer in 2017 at the American Numismatic Association show in Denver, and we discussed the potential of a new volume in Whitman’s library of “100 Greatest” books. We immersed ourselves in the best way to present a subject as far-reaching as “the best of Canadian coins.” Dr. Richer’s development of the manuscript included consultation with the Canadian Numismatic Research Society. In 2021 we began its final editorial work.

Harvey Richer brought the same intellectual curiosity to 100 Greatest Canadian Coins and Tokens that he gave to Gold Coins of Newfoundland—asking questions, laying the groundwork, and always looking for the human element. His writing is embellished with personal asides (the connections that make numismatics an art as well as a science). And he’s not afraid to push boundaries in his exploration of what defines a “coin” or “token.” Among the 100 Greatest you’ll find playing cards, wampum belts, and encased postage. While clearly not coins, are these forms of token money? Such questions always enliven the conversations around Whitman’s “100 Greatest” books—not to mention how to define “greatness,” and what constitutes the greatest of the great.

Accompanying his narrative are outstanding pictures of the coins and tokens themselves. Photographs shared by Heritage Auctions make up the majority of the coin images—not surprising, given Heritage’s status as the largest collectibles auctioneer and third-largest auction house in the world. Many of the Canadian rarities find their homes through the Dallas-based firm’s sales. PCGS and Stack’s Bowers Galleries also contributed photographs, as did numerous museums, archives, and libraries. The result is a gorgeous numismatic panorama, a virtual coin cabinet that can be opened and enjoyed at any time.

As a professor of astronomy, Harvey Richer has used the Hubble Space Telescope and major terrestrial telescopes to gaze into the heavens. The numismatic community is fortunate to have his attention turned to the richly interesting field of Canadian coins and tokens. And at Whitman Publishing we’re proud to add him to our roster of Yeoman, Charlton, Willey, and Haxby in the exploration of Canadian numismatics. 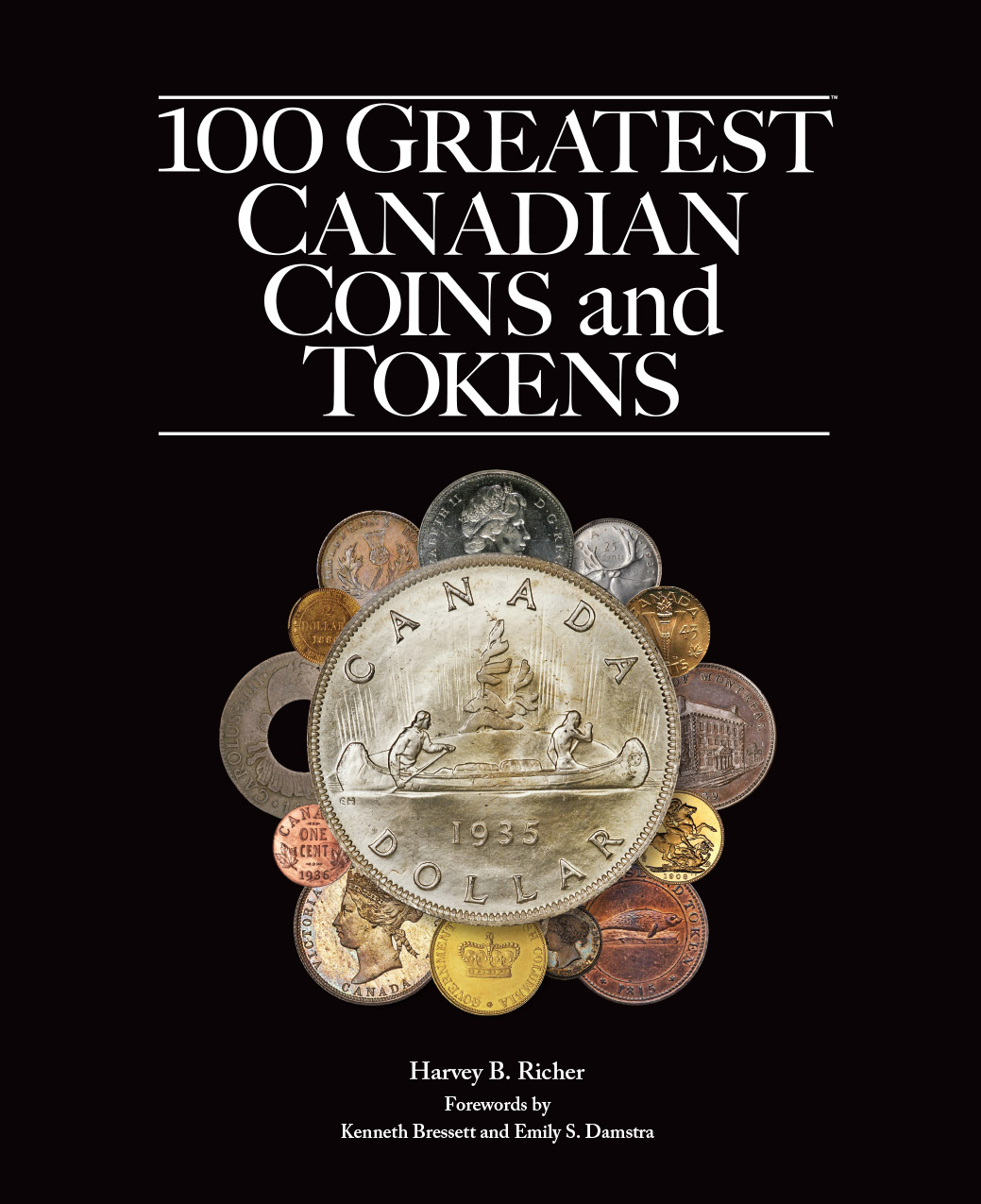 100 Greatest Canadian Coins and Tokens is the latest addition to Whitman Publishing’s “100 Greatest” library of books.

By Harvey B. Richer; forewords by Kenneth Bressett and Emily S. Damstra.

Whitman Publishing is the Official Supplier of the American Numismatic Association. As a benefit of membership in the ANA, members can borrow 100 Greatest Canadian Coins and Tokens (and other Whitman books) for free from the Association’s Dwight N. Manley Numismatic Library, and also receive 10% off all Whitman purchases. Details are at www.money.org.

Q&A: Are the designs on Olympic medals struck for public sale the same as those awarded to athletes?

Notes Published: Establishing your name as a writer