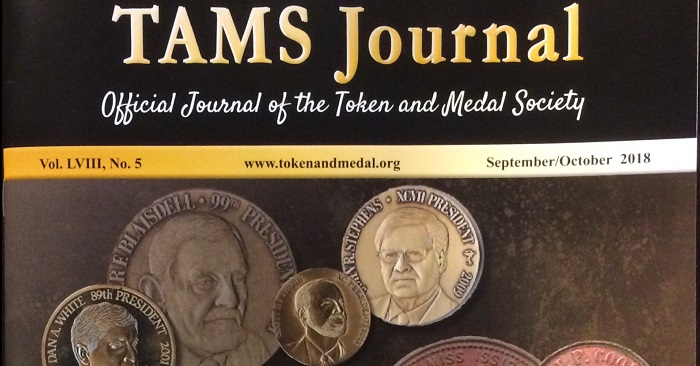 The September/October 2018 issue of the TAMS Journal (the official journal of the Token and Medal Society) has been shipped to Society members and will be in mailboxes shortly if they haven’t arrived already.

Features in volume LVIII, no. 5, include:

John D. Mutch, in the “Mavericks” column, shares valuable advice for researchers seeking information on unattributed U.S. tokens, with an interesting (and a bit disturbing) case-study caveat. In this issue, Mutch and his team of attributers have identified nearly three dozen mavericks (tokens of currently unknown or unpublished origin), with their historical source material and citations provided. He also illustrates 44 new listings that researchers can help identify—a fun challenge for history buffs, genealogy sleuths, puzzle aficionados, codebreakers, and others who enjoy cracking history’s mysteries! All of this research adds to our knowledge and understanding of U.S. commerce and trade, small-town history, and other aspects of day-to-day American life in the 1800s and 1900s.

The Token and Medal Society’s webmaster, Bill Hyder, invites collectors to expand the TAMS website by describing their specialities in the site’s FAQ section. He can be contacted at .

The September/October 2018 issue also features the first “From the President” message from incoming president Ernie Nagy of Michigan. “I will focus on maintaining the traditions of our club,” he writes, “and to find new ways to promote the study of tokens and medals.” Other regular features in this issue include

TAMS was founded in Detroit in 1960, and incorporated in the District of Columbia in 1966. It is an educational nonprofit organization, well respected and well established in the hobby community, as evidenced by the quality of display advertisers in its Journal’s pages: Q. David Bowers, NGC, Stack’s Bowers Galleries, Kagin’s, Holabird Western Americana Collections, So-Called Books, Presidential Coin & Antique Co., Steve Hayden Civil War Tokens, and Heritage Auctions.

Writers who would like to contribute articles to the TAMS Journal may contact the editor, Eric Schena, at .


To join the Society as a member, visit www.tokenandmedal.org, email Treasurer Mark Lighterman at , or write to Token and Medal Society Membership, 5224 W. State Road 46 #408, Sanford FL 32771. New members receive a free book of their choice (value $29.95 to $55.00) from the club’s inventory. Annual dues are $30 within the United States; $12 for junior members (under 18); with other membership levels available.