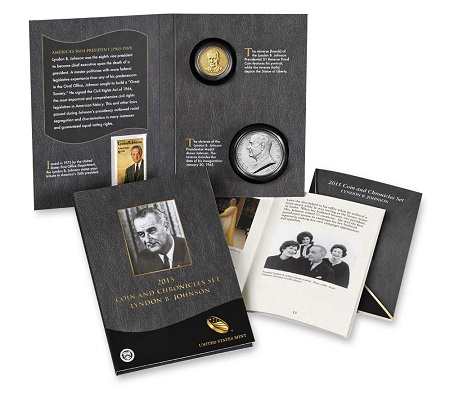 The 2015 Lyndon B. Johnson Coin & Chronicles Set is now available from the U.S. Mint.

The set includes an exclusive Reverse Proof Presidential $1 Coin, a presidential medal struck in silver that is .999 fine, a Lyndon Johnson postage stamp issued in 1973, and a booklet featuring historical information and pictures from the President’s life, military service, and years in the White House. Each set costs $57.95; a mintage limit of 25,000 units and an order restriction of two per household are in place.

The obverse of the Reverse Proof Presidential dollar bears a portrait of Johnson facing the observer, with LYNDON B. JOHNSON, IN GOD WE TRUST, 36th PRESIDENT, and 1963-1969 inscribed along the rim of the design. The reverse features a design common to all of this year’s Presidential $1 coins, with an image of the Statue of Liberty surrounded by the inscriptions UNITED STATES OF AMERICA and $1. 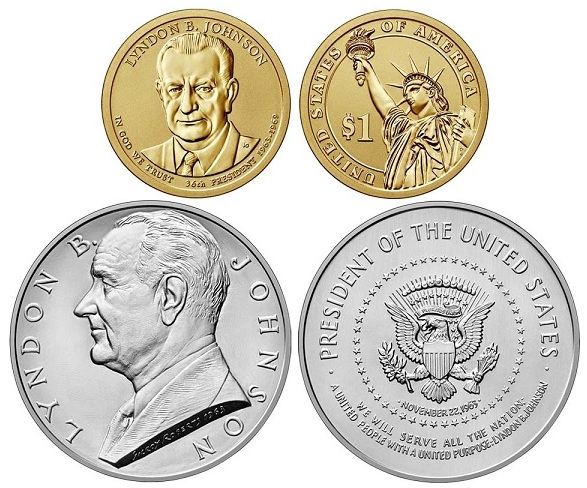 The silver medal’s obverse features a rendering of Johnson in profile, with LYNDON B. JOHNSON circling the rim. The reverse carries the Presidential Seal with the inscriptions PRESIDENT OF THE UNITED STATES and Johnson’s inauguration date of NOVEMBER 22, 1963. Also inscribed on the medal’s reverse is a quote from Johnson’s “Let Us Continue” speech, delivered to Congress on November 27, 1963: WE WILL SERVE ALL THE NATION, A UNITED NATION WITH A UNITED PURPOSE. – LYNDON B. JOHNSON.

The Johnson set is the fourth and final Coin and Chronicles issue of the year. These sets have generated considerable interest, and the three previous 2015 issues — featuring Harry S. Truman, Dwight D. Eisenhower, and John F. Kennedy — are all currently unavailable on the U.S. Mint’s Web site, having sold nearly all of their allotted inventory.