The Perth Mint of Australia will soon release the 2012 Marilyn Monroe™ 1 oz Silver Proof Coin. This limited mintage, licensed product commemorates the life of one of the world’s most legendary icons of the silver screen.

Marilyn Monroe (1926 – 1962) was born Norma Jeane Mortenson, and baptized Norma Jeane Baker. Considered the epitome of the ‘blond bombshell’, she began a career as a model, which led to a film contract in 1946. Her early film appearances were minor, but her performances in The Asphalt Jungle and All About Eve (both 1950) were well received.

By 1953, Monroe had progressed to the leading role in such films as Gentlemen Prefer Blondes (1953), How to Marry a Millionaire (1953) and The Seven Year Itch (1955). Monroe’s dramatic performance in Bus Stop (1956) was hailed by critics, for which she received a Golden Globe nomination. She received a BAFTA award for The Prince and the Showgirl (1957) and received a Golden Globe Award for her performance in Some Like It Hot (1959). 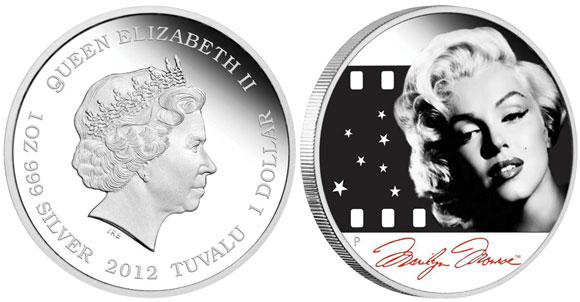 The proof quality, one ounce 99.9% pure silver coin features a photographic image of Marilyn Monroe set against a backdrop of film with stars. A representation of her signature appears below, with the Perth Mint’s “P” mint mark also included.

The obverse design of the coin features the Ian Rank-Broadley effigy of Queen Elizabeth II with an indication of the monetary denomination, silver weight and purity, and the “2012” date.

These coins are produced by the Perth Mint and issued as legal tender under the authority of the Government of Tuvalu. The mintage is limited to 12,500 coins worldwide. Each coin is packaged in a display case with illustrated shipper and numbered certificate of authenticity.

Once available, the coins can be found in the