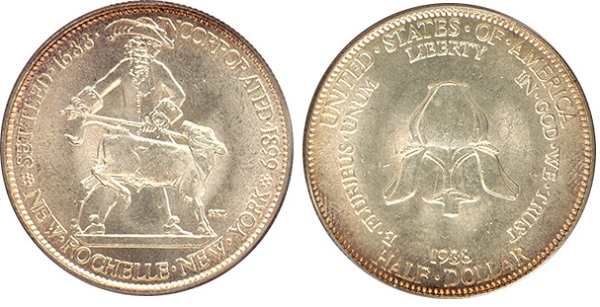 The 1938-dated New Rochelle Commemorative half dollar was the final commemorative issued in the 1930s. Struck to commemorate the 250th anniversary of the founding of the city of New Rochelle, New York, the issue was authorized by the Act of May 5, 1936. The act stipulated that the coins must be dated 1938, the year of the commemoration, regardless of what year the coins were actually struck. This resulted in an unusual situation that is not all that surprising if you have read about the methods 1930’s issuing committees utilized to get a commemorative coin minted for their cause.

New Rochelle is located in the southernmost part of the state of New York, northeast of Manhattan on Long Island Sound. The land had been sold by the Siwanoy Indians in the early 1650s to Thomas Pell, an English physician. The land was passed on to his nephew, John Pell, who sold 6,000 acres to Jacob Leisler and a group of Huguenots in 1688. John Pell was Lord of Pelham Manor, and when the land was sold to Leisler the contract said that, in addition to the the purchase money of 1675 pounds, Leisler and his heirs should pay Pell and his heirs “One Fatt Calfe” every year on June 24th (the feast of St. John the Baptist), if demanded.

The Huguenots were a Protestant group that fled France after facing persecution. Thirty-three families, many coming from La Rochelle in France, founded a new town on the land purchased by Jacob Leisler, naming the city after their old hometown. Over the next few generations, New Rochelle attracted more French people, and the French language remained dominant there until at least the end of the 18th century, when it was still a small town of less than 1,ooo people. In the last 200 years the city has grown exponentially; it is now a bedroom community for nearby New York City with a population of approximately 75,000 people.

A maximum of 25,000 New Rochelle Commemorative half dollars were approved for production, and the authorizing act stated that they must be dated 1938. The Philadelphia Mint struck the entire authorized number in April of 1937, however — over a year before the actual celebration in June of 1938.

Gertrude Katherine Lathrop, who was born in Albany, New York, and is specifically known for her animal sculptures, designed the coin. She also designed the Albany Commemorative half dollar, another New York commemorative featuring an animal. 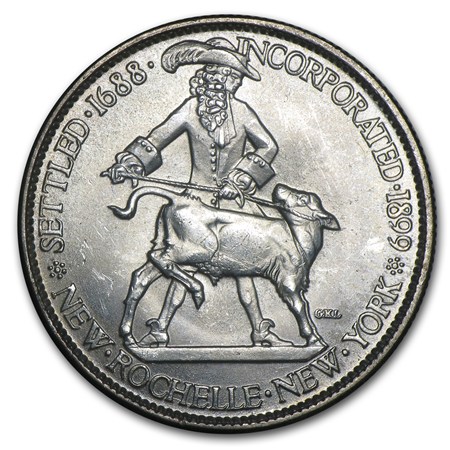 The obverse features a realistic image of John Pell, Lord of Pelham Manor, who sold the land to Jacob Leisler in 1688. A young calf is in front of Pell, who holds a rope attached to the calf. In the field near the calf are Lathrop’s initials, GKL. Surrounding the whole scene is SETTLED 1688, INCORPORATED 1689, and NEW ROCHELLE NEW YORK. Between the two parts of text are small flower-like figures of six dots surrounding a larger center dot. 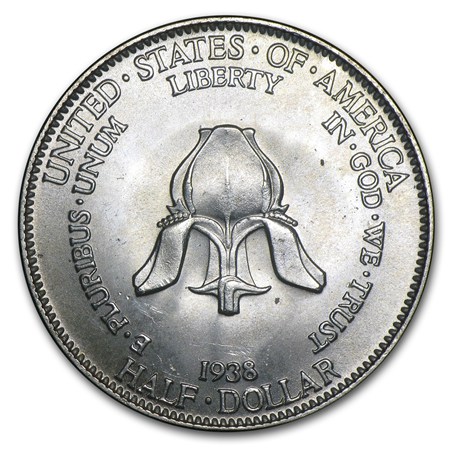 The reverse features a realistic fleur-de-lis, barely recognizable compared to the common stylistic figure that has been a symbol of status in France and Europe since medieval times. The figure is also part of the coat-of-arms of the city of La Rochelle. Below the fleur-de-lis is the date, 1938, and below that is HALF DOLLAR. Above it is LIBERTY, and along the top is UNITED STATES OF AMERICA. On the left side, slightly away from the rim is E PLURIBUS UNUM; on the right side is IN GOD WE TRUST.

The New Rochelle Commemorative Coin Committee, who accepted orders as early as the fall of 1936, issued the New Rochelle Half Dollar. The issue price was $2 each, though coins sold by mail were sold for $2.18 to cover postage and handling. Groups of five coins were sold at a small discount through the mail for $10.27 total. Sales were good for the period, although the entire issue did not sell out, and 9,749 coins were later returned to the Philadelphia Mint to be melted. This leaves a net mintage of 15,251 coins.

According to Anthony Swiatek, the issue would have had an even lower net mintage if members of his coin club in Westchester, New York had not purchased hundreds of coins for face value once sales slowed down. There were also 50 special strikes produced, struck on polished planchets. Other coins also possess prooflike qualities; these will be designated as such by NGC.

Despite a reasonable mintage for the time, this is still one of the higher-priced classic commemoratives, and overall the number of certified numbers is relatively low compared to other commemoratives with similar mintages. Yet this is not an issue that is particularly rare in higher grades, as the issuers took good care in handling the pieces that they sent out to buyers. The relatively high price compared to the mintage is most likely just the result of this being a popular issue. The finest pieces certified by PCGS and NGC are graded MS-68+, though of course at that level the New Rochelle becomes a rare coin.

PCGS does not designate prooflikes, but NGC does. NGC previously designated them as “specimens,” but later switched to more correct nomenclature. Most certified by NGC grade between MS-64PL and MS-66PL, although a few pieces have been certified both lower and higher. While the market for these prooflike pieces is still rather weak, they do tend to sell for slightly higher figures than similar non-PL pieces. If the market for prooflike commemorates ever catches on, those coins have good potential as they have excellent eye-appeal and suit this design quite well.

On August 5, 1939, an act was passed that effectively ended the issuance of commemoratives authorized prior to March 1, 1939. This meant that long-running issues such as the Oregon and Texas pieces would no longer be released, even if their issuing committees wanted to continue their money making ventures. It also effectively meant the end of new commemoratives, at least for awhile, as World War II shifted attentions to other matters. The next commemorative half dollar would not be issued until 1946.