In the event of a ‘Yes’ vote on Scottish independence, a completely new currency would ensure that Scotland is wholly independent. The adoption of a new coinage system would be a logical step. The International Numismatic Agency Ltd (INA) producers of the first British prototype Euro coin sets in 2002 have unveiled their latest set of prototypes for 2014. This is a collection of pattern or prototype coins consisting of 9 different denominations, which have been proposed by INA Ltd. for use by the citizens of an independent Scotland.

The Scottish Ryal has been suggested as a new currency unit for Scotland.  As a decimal coinage system 1 Ryal would equal 100 Scots Pence. King David I of Scotland (1124-1153) appears to have been the first independent Scottish king to issue coins, and the production of Scottish coins continued until the Act of Union in 1707, a period of nearly 600 years. The Ryal was actually the Scottish unit of currency in use when James VI of Scotland acceded to the English throne in 1603 and Scotland ceased to be a separate kingdom. The Ryal was used extensively during the reign of James’s mother, Mary (‘Queen of Scots’) and Scottish Pennies were a smaller currency unit in use during this period.

This collection of pattern or prototype coins comprises a 5 Ryals, 2 Ryals, 1 Ryal (bi-metallic) 50 Scots Pence, 20 Scots Pence, 10 Scots Pence (Nordic gold) 5, 2 and 1 Scots Pence (copper). The specifications of the Scottish patterns are similar to those of the current euro coins, though not identical. 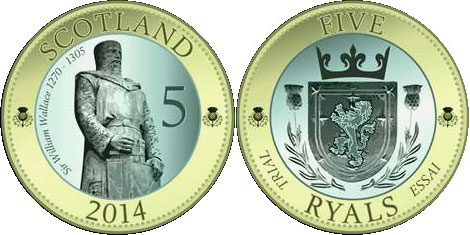 The 5 Ryals, 2 Ryals and 1 Ryal coins are produced as bi-metallic pieces and feature the famous statue of Sir William Wallace (the Scottish knight who was an early figure in the Scottish wars of independence) positioned outside Edinburgh Castle. 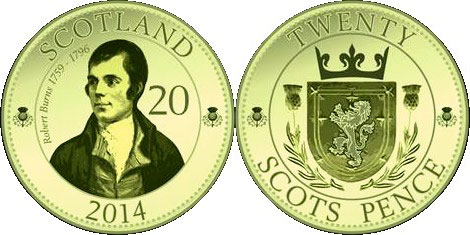 The 50 Scots Pence, the 20 Scots Pence and the 10 Scots Pence coins are minted in Nordic gold and feature an obverse portrait of Robert Burns, Scotland’s national poet and a founder of the Romantic Movement. 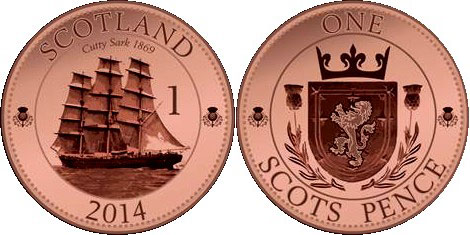 Finally, the 5 Scots Pence, 2 Scots Pence and 1 Scots Penny coins are minted in copper and have an obverse rendition of the famous Cutty Sark, built on the Clyde in 1869.

The Scottish Independence referendum will decide if Scotland should become independent of Westminster and essentially dissolve the Union of Great Britain, which officially came into effect during the reign of Queen Anne in 1707. The referendum is to take place on the 18th September of this year. Comments from the “Yes” camp have stated the advantages of a new Scottish currency would be to give a new Scottish nation the power to set its own interest rates, and to allow its currency value to fluctuate – a factor which is considered important in an economy which could be dependent on the price of oil. If an independent Scotland were to seek separate EU membership and eventually adopt the euro, then a series of coins similar to those currently in use in the euro-zone would be helpful and ease any further transition.

The coin sets are to be offered through various channels catering to the numismatic trade for both coin dealers and coin collectors. For additional information on the purchase of the Scottish 2014 Prototype Ryal set, please contact INA directly at: http://www.firstworldwarmedals.co.uk/