The Royal Mint revealed today (19th March) that they will propose to issue a new £1 coin with state of the art security features which are being incorporated in the new coin in an effort to reduce the significant amount of counterfeit coins. 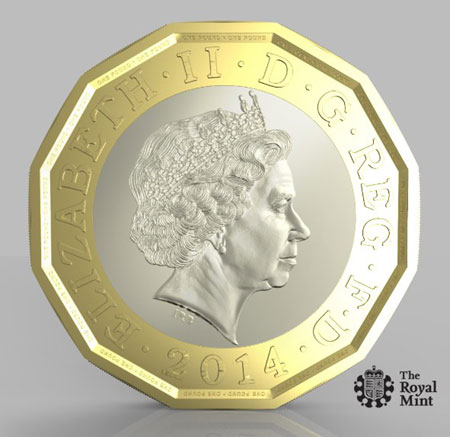 The use of iSIS, The Royal Mint’s new Integrated Secure Identification System offers a fully protected currency system based on a new generation of coin, which incorporates three tiers of covert banknote-strength security and can be authenticated via high-speed automated detection units to industry-leading levels, including retail and vending equipment. Project iSIS is the work of The Royal Mint’s in-house technology team and involves the application of an existing security technology that has been proven over decades in banknotes. It is the first time that this existing security has been successfully embedded into coins.

The prototype coin which is proposed would incorporate micro-text along the coin’s surface edge and rim. The actual side edge also sees the addition of improved incused lettering which would incorporate micro-texture on the actual letters. The prototype coin produced by the Royal Mint proposes a twelve-sided shape which evokes memories of the pre-decimalization brass three-pence piece. It will be constructed from two different colored metals (bi-metallic) and contain an iSIS security feature.

As part of the Royal Mint and the Treasury’s program to introduce a new generation one pound coin, a public consultation will be held over the summer focusing on how to manage any impacts before a final decision is made on the precise specification of the new coin, including the metal composition. The Royal Mint proposes to work closely with key industry stakeholders to conduct a full consultation in order to understand the potential impact for industry.  It was also announced that a public design competition will be held at a later date to choose the design for the reverse side of the coin which is expected to be introduced in 2017.

For more information on the evolution of the one pound coin and additional fact & figures, please visit the royal Mint’s website at: http://www.royalmint.com/aboutus/news/the-new-1-pound-coin