I attended the October 26th meeting of the Citizen’s Coinage Advisory Committee in the Mint’s headquarters in Washington, D.C., and witnessed the members’ discussions of the obverse and reverse designs for the New Frontier Congressional Gold Medal. The medal honors the space missions of John Glenn aboard Mercury Atlas 6 (first American to orbit the Earth) and of Neil Armstrong, Buzz Aldrin, and Michael Collins aboard Apollo 11 (first and second people to set foot on the Moon, and the pilot of the mission command module). Michael Olson liked how the two missions were visually separated on obverse design 1, and expressed support for reverse design 2, citing its “nice artwork.” He also favored obverse design 3. Michael Ross said that obverse design 1 depicted a look of “sacrifice and courage in the face of great risk.”

Heidi Wastweet commented that these designs provided a higher level of quality than has been seen in the recent past. Of the first obverse design, she said that the expressions on the astronaut’s faces were “very fitting”, but expressed dislike of both the display of teeth on obverse design 4, and of seeing the back of the astronaut on reverse design 7.

Donald Scarinci expressed excitement about reverse design 2, with its incorporation of the edge into the medal itself. He also commented that  the text “Act of Congress 2009” should be removed from reverse design 1. He spoke highly of reverse design 2: “if the hardware were removed, I’d be in Heaven.”  In Mr. Scarinci’s opinion, the use of the natural arc of the Earth against the Moon was one of the highlights of this design. 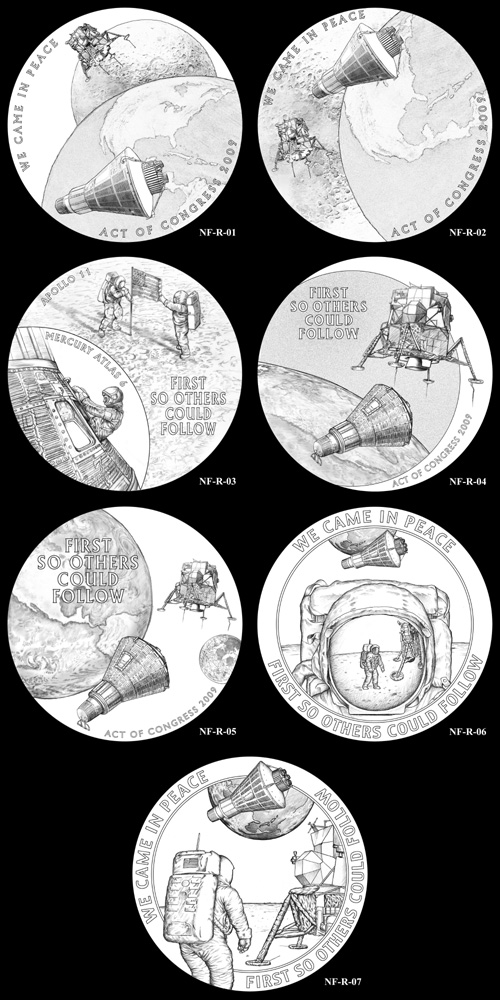 Dr. Doreen Bolger echoed Ms. Wastweet’s statements regarding obverse design 1, but would like the texture removed from that design.

Roger Burdette expressed support for obverse design 1, but said the other three resembled “gift shop items.” He did not favor any of the reverse designs, stating they “lacked imagination.”   He also noted that the use of the phrase “We came in peace” was missing the second half, “For all mankind.”

Rev. Dr. Richard Meier followed his fellow members’ support of obverse design 1.   He also said that reverse design 7 reminded him of the Florida State Quarter, but liked reverse design 3, as it shows the astronauts “in action.”

Michael Brown remarked that obverse design 1 has the two crews facing in opposite directions, a clear distinction of who was on which mission. He also noted the absence of Michael Collins, and the Apollo command module he piloted. While the lunar lander was on the Moon, Collins was the first person to experience complete detachment from the rest of humanity during his trip around the far side of the Moon. Reverse design 1 was a “better design” in Mr. Brown’s opinion, but it needed to exclude the hardware, and reverse design 7 was “too crowded.” He concluded with a request that the Apollo command module be added to the hardware depicted on the medal, to appropriately honor Collins’ work on the mission.

The design votes were as follows: For the obverse, design 1 was the clear winner, receiving 25 of the possible 27 votes and the committee’s recommendation. The other three designs received 4, 3, and 3 votes, respectively. The reverse design vote was not the runaway that was seen with the obverse. Design 2 received 20 out of 27 votes and the recommendation, whereas design 1 and 3 through 7 received 8, 12, 3, 1, 0, and 0 votes.

There were four motions made after the formal vote. The first was to modify obverse design 1 to include the mission names and date that were included on obverse design 3. With two yea’s, six nay’s and one abstention, it failed to pass. The second motion was to omit the phrase “Act of Congress 2009” from all designs: it is a tradition of Congressional medals, but not a requirement. That motion passed on a 5-to-4 vote. Third was to identify the missions by name on reverse design 2. That motion passed with a clear 7-to-2 vote. The final motion was to add “For all Mankind’ to the reverse designs where it was used: it passed on a 8-0 vote with 1 abstention.