The Monnaie de Paris have launched a new series of coins which highlight the comic book sagas of one of the country’s most famous characters, the adventures of Asterix and his faithful companion Obelix.

The comic book series has followed the exploits of a village of indomitable Gauls who resist Roman occupation by means of a magic potion, brewed by their druid priest Abraracourcix, giving the recipient superhuman strength. Originally created by René Goscinny and illustrated by Albert Uderzo (who took over the writing after the death of Goscinny in 1977) the characters were introduced to French & Belgian audiences in October 1959. The series has, since its introduction been translated into more than 100 languages, been brought to the big screen as full length films and has sold more than 350 million copies. Many of the stories have them travel to foreign countries, though others are set in and around their village. The titular character of Asterix, along with his friend Obelix whose name includes an “ix” suffix in both names is actually based on the real names of Gaulish chieftains such as Vercingetorix, Orgetorix, and Dumnorix.

The coins, three in the series consists of two gold and one silver coin struck to proof quality. The obverse designs depict charming and familiar illustrations of the primary characters as they have appeared in countless comic books.

€100 –  The first occasion in which Asterix and Obelix 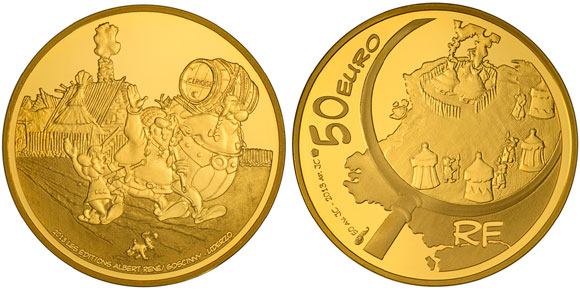 €50 –  The departure of Asterix, Obelix and Abraracourcix from Belgium. 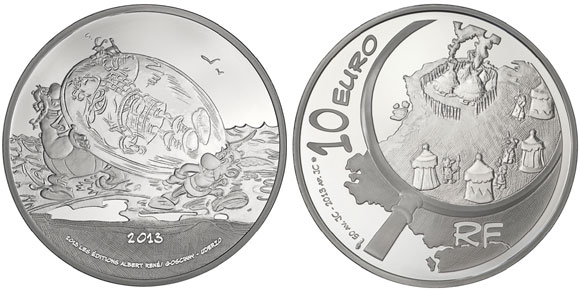 €10 – Asterix and Obelix are represented with an ice cube in which the hero Mac Oloch Scots was imprisoned.

The reverse shares the same design, that of a clever depiction of their mythical village surrounded by irreducible camps of Roman legionaries as seen under a magnifying glass.

For more information on these and other coins offered by the Monnaie de Paris, please visit their website at: http://www.monnaiedeparis.fr/collection-asterix-2013/monnaies Information is offered in both French & English.