The National Bank of Denmark has issued (7th October) new coins to mark the centenary of the publication of Niels Bohr’s atomic theory. Three additional issues will highlight as their common theme –  scientific theories developed by Danish scientists since 1572. This innovative series comprises four different 500-kroner silver coins and four different 20-kroner circulation coins of the same design, additional proof versions of the 20-kroner coins will also be minted, aimed at collectors. 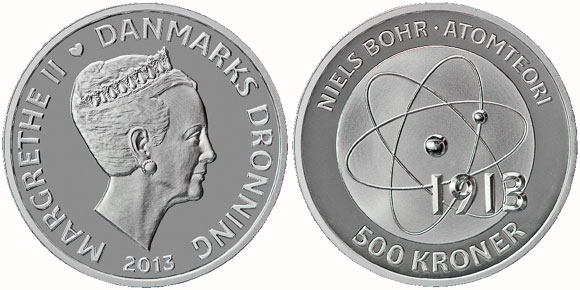 In 1913, Niels Bohr published three papers on the structure of atoms and molecules in the scientific periodical Philosophical Magazine. In these papers, Bohr presented his atomic theory, for which he was later to become world-famous. Bohr based his theory on the assumption that electrons travel in clearly defined orbits and that they release or absorb electromagnetic radiation when they jump from one orbit to another. This was a departure from classical physics at the time and caused a great stir and debate. Besides publishing his well-known atomic theory, Bohr worked extensively to map the composition of atoms, and by the early 1920s, he had mapped the entire periodic system. In connection with this huge task, Bohr discovered a new element, Hafnium, which was named after the Latin form of the city of Copenhagen, as this was where the discovery was made. In 1922, at the age of 37, he was awarded the Nobel  Prize for physics for his scientific achievements. Niels Bohr was awarded with the Danish Order of the Elephant in 1947 by HM King Frederik IX, being one of the very few recipients of this royal order who was not a head of state. Bohr was last seen on Danish currency when in 1993, his image was included on the 500 Kroner banknote – this note was replaced in 2011. 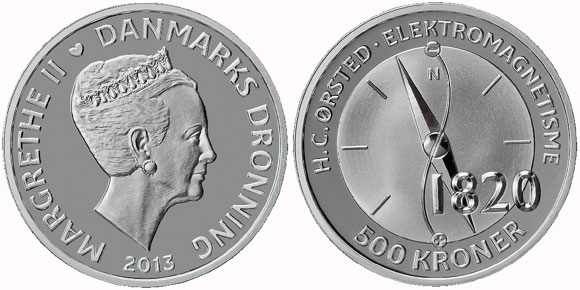 As a physicist and chemist, Hans Christian Ørsted became world-famous for discovering electro-magnetism. During a lecture at the University of Copenhagen in 1820, Ørsted conducted an experiment in which he held a live wire over a compass needle, which deflected slightly. The result of this experiment aroused great interest in scientific circles, as Ørsted had discovered electro-magnetism, which became a new branch of physics. In addition to physics and chemistry, Ørsted was interested in promoting the Danish language. He advocated using Danish at the University rather than Latin, as he believed this would liven up scientists’ language and promote educational dissemination of research and its findings. As part of this linguistic campaign, he coined a number of Danish words, many of which are still in use. These include ’brint’ (hydrogen), ’ilt’ (oxygen) and ’vægtfylde’ (specific gravity), but also more artistically oriented words such as ’billedkunst’ (visual art), ’ildsjæl’ (fiery soul) and ’tankeeksperiment’ (thought experiment)

Ole Rømer – The Speed of Light 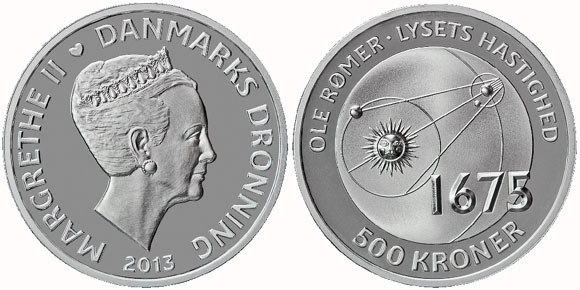 In 1675, during a stay in France, Ole Rømer was the first scientist to prove that light is not propagated instantaneously, but at a finite speed. As he put it, light ”hesitates”. Rømer calculated that it took between 8 and 11 minutes for light from the sun to reach the earth. The time is in fact 8 minutes and 20 seconds, so Rømer was able to perform a somewhat exact measurement. A few years after his discovery in 1681, Rømer was called home to Denmark by King Christian V to take up a position as professor of astronomy and head of the Rundetårn (Round Tower) observatory in Copenhagen. Rømer not only worked as a scientist, in the 1680’s, he introduced uniform weights and measures throughout Denmark. This renaissance man held a number of positions as chief of the police, of the fire department and as mayor of Copenhagen, and… for some time, he served as a supreme court judge. It was also thanks to Ole Rømer that Denmark in 1700 adopted the Gregorian calendar. 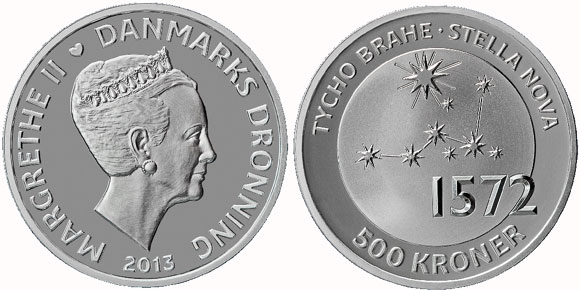 Extraordinarily, at the age of 12, Tycho Brahe enrolled at the University of Copenhagen to study law. In 1560 he was so fascinated by an eclipse of the sun that he began to study astronomy during his own free time in addition to reading law. In 1572 – aged 26, Brahe discovered a new star in the constellation Cassiopeia. By means of very precise measurements he demonstrated that the star was further from the earth than the moon and hence had to be a fixed star. His discoveries were contrary to the prevailing belief that the celestial realm was unchanging. In 1573 he wrote a book about his discovery of the star, Stella Nova (Latin for ’new star’). His discovery proved to be an astronomical sensation, and Brahe won international acclaim for his observation. In recognition of these impressive scientific achievements, His Majesty King Frederik II granted Brahe the island of Hven as his estate. On the island, he first built a small castle, Uranienborg, which not only served as his home, but also held a laboratory, an observatory and his library. Unfortunately, it was discovered that the building swayed in the wind so that his measurements became inaccurate. Consequently, Brahe built Stjerneborg, an underground observatory, nearby. For many years, Brahe made observations on Hven and developed sophisticated measuring instruments and calculation programs. Hven attracted many scientists of the age, and as a research institution it was unique for its time.

Struck by the Royal Danish Mint in Copenhagen, the silver crown-sized coins are designed by a team headed by Medalist Henrik Wiberg and are struck to proof quality with a face value of 500 kroner. The 20 kroner coins carry the same designs as their larger counterpart. All four silver as well as the aluminium-zinc 20 kroner coins are available directly from the Royal Danish Mint – the silver coins are available for their face value.

For more information on these and other coins and year sets, please visit their website at: http://royalmint.dk/ Information offered in Danish & English, international orders fulfilled.