The Austrian Mint has announced (16th April) the first release of a new 10 coin series “Austria by its Children.” With the first release scheduled for the 25th April, the series celebrates Austria through its children, what children are proud of and speak about when they speak of their home.

The Austrian Mint invited younger citizens of the country to draw something reminiscent of their home province. Over the next five years, two coins will be issued per year, capturing the winning design for each province on the reverse of the 10 euro silver coins. The first nine coins will celebrate the provinces of Austria, while the tenth and final coin will celebrate the country of Austria as a whole. The obverse of each coin will feature a UNESCO world heritage site located in the respective province.

The reverse of the two coins to be issued this year coin were designed by Viktoria Reicht and Philip Ogris, both ten years old.  Their designs were selected from the thousands submitted through a competition in which all children aged 9 and 10 were invited to submit a design about their home province. 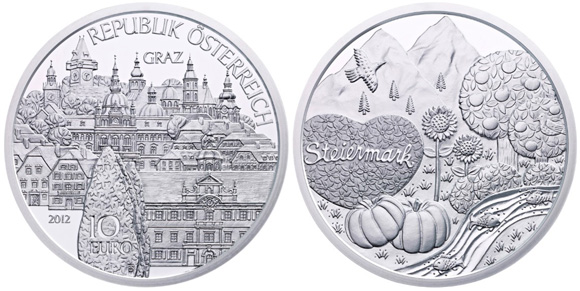 Viktoria’s design honors the federal province of Styria, located in the center of Austria.  of Styria. Her charming depiction for the reverse features first and foremost the mountains of her home and the “green” heart prominently displayed.  Of course, the many forests, trees, apples and the fields of sunflowers that she associates with Styria are prominent in her design as well.  It is completed with a couple of pumpkins which Styria is well known for and from which the well-known pumpkin seed oil is produced.   Finally, the fresh streams that run throughout the region also “run” along the bottom edge of her design.  The Mint’s Chief Engraver Thomas Pesendorfer carefully engraved Viktoria’s reverse depiction, staying true to her design and enhancing it with the fine 3 dimensional details that Austria’s coins are so well known for.  Some of the elements for which Viktoria originally used color have been carefully engraved to highlight their prominence.

The obverse of the Styria coin features the old-town centre of the city of Graz, the capital of the province of Styria. Near the top of the design is the famous clock tower.  Progressing to the front of the design the coin captures the town hall (the provincial building of Styria), the baroque cathedral, and in the right foreground is the Palace of Eggenberg.  The old core of the city has been honored as a World Heritage Site by UNESCO. Also located on this obverse side of each coin is the text, “REPUBLIK OESTERREICH” (Republic of Austria) the year of issue 2012 and the face value of 10 euros.

The coin is stuck in sterling silver with a weight of 17.3 grams and a diameter of 32 mm. The Styria coin will be available in two finishes, Proof and Uncirculated, with a maximum mintage of 30,000 and 40,000 respectively.  The proof coins come encapsulated in a presentation case with a numbered certificate of authenticity.  The special uncirculated examples are available in a blister pack with a definitive Styrian design on the sleeve. The coin will also be available in Austria only in the regular circulation finish, which is struck in copper.  The copper coins have a reeded edge whereas the silver coins have a smooth edge.

Philip Ogris’ design, which was selected to celebrate the province of Carinthia (Kaernten) and is the second coin in the series, will be issued on September 26, 2012.  For more information on this and other coins available from the Austrian Mint, please visit their website at: https://www.muenzeoesterreich.at/Produkte/10-Euro-Silbermuenze