The IPZS – Istituto Poligrafico Zecca dello Stato (Italian State Mint) have issued a new two Euro coin which celebrates and remembers the 750th anniversary of birth of Dante Alighieri (1265 – 1321) one of the most significant Italian poets of the late Middle Ages. Dante is remembered for his work Divine Comedy, originally called Comedìa (in modern Italian, Commedia) and later referred to as Divina, which is widely considered the greatest literary work composed in the Italian language and an overall masterpiece of world literature. Born in Florence, Italy and although the exact date of his birth is unknown, it is generally believed to be the year 1265 or thereabouts. The year can be deduced from autobiographic allusions in the Divine Comedy whereas Its first section, the Inferno, begins, “Nel mezzo del cammin di nostra vita” (“Midway upon the journey of our life”) which can imply that Dante was around 35 years old, taking into consideration that the average lifespan according to the Bible (Psalm 89:10, Vulgate) is 70 years. Thus, since his imaginary travel to the nether world took place in 1300, he was most probably born around 1265.

Dante’s family may be descended from the ancient Romans, but the earliest relative he could mention by name was Cacciaguida degli Elisei (c.1091 – c.1148) his great-great-grandfather, born no earlier than about 1100. Dante’s father, Alaghiero, or Alighiero di Bellincione, (1210 – 1283?) was a White Guelph – supporters of the Pope and the Holy Roman Emperor, and perhaps a moneylender who suffered no reprisals after the Ghibellines won the Battle of Montaperti fought on the 4th September 1260, between Florence and Siena in Tuscany  in the middle of the 13th century. Dante himself fought with the Guelph cavalry at the Battle of Campaldino, fought on the 11th June 1289 whose victory brought about a reformation of the Florentine constitution. Little is known about Dante’s education, he presumably studied at home or in a chapter school attached to a church or monastery in Florence. It is however known that he studied Tuscan poetry and that he admired the compositions of the Bolognese poet Guido Guinizelli (c. 1230–1276) When Dante was 12, he was promised in marriage to Gemma di Manetto Donati, daughter of Manetto Donati, member of the powerful Donati family. The exact date of his marriage is not known but the only certain information is that before his exile in 1301, he had three children, Pietro, Jacopo and Antonia. 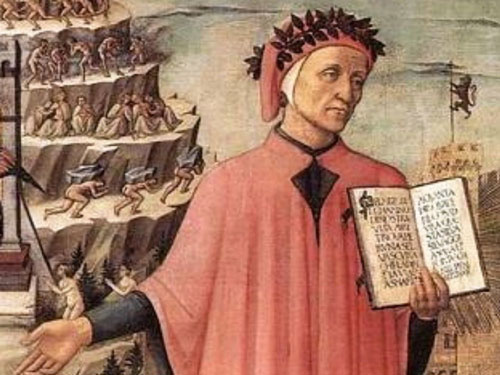 Due to Dante’s affiliation as a White Guelph as opposed to the black faction, who were in support of the rule of the Pope, he was condemned to exile for two years and ordered to pay a large fine. He was accused of corruption and financial wrongdoing by the Black Guelphs for the time that Dante was serving as city prior (Florence’s highest position) for two months in 1300. The poet was still in Rome in 1302 where the Pope, who had backed the Black Guelphs, had “suggested” that Dante stay. Florence under the Black Geulphs therefore considered Dante an absconder. Dante did not pay the fine, partly because he believed he was not guilty and also because all his assets in Florence had been seized by the Black Guelphs. He was condemned to perpetual exile – if he returned to Florence without paying the fine, he could have been burned at the stake. It wasn’t until June 2008, nearly seven centuries after his death, that the city council of Florence finally passed a motion rescinding Dante’s sentence!

In 1310, Holy Roman Emperor Henry VII of Luxembourg (c. 1275 – 1313) marched into Italy at the head of 5,000 troops. Dante saw in him a new Charlemagne who would restore the office of the Holy Roman Emperor to its former glory and also retake Florence from the Black Guelphs. It was during this time that he wrote De Monarchia, proposing a universal monarchy under Henry VII. It may have been at this time during his exile that he conceived of his work the Comedy, but the date is uncertain. The work is much more assured and on a larger scale than anything he had produced in Florence. In 1312, King Henry VII assaulted Florence and defeated the Black Guelphs, though there is no evidence that Dante was involved and in 1315, Florence was forced the military officer controlling the town to grant an amnesty to those in exile, including Dante. He wisely refused, preferring to remain in exile since his death sentence was actually commuted to house arrest on condition that he go to Florence to swear he would never enter the town again. This he also refused, and his death sentence was confirmed and extended to his sons. Dante still hoped late in life that he might be invited back to Florence on honorable terms. For Dante, exile was nearly a form of death, stripping him of much of his identity and his heritage. He died in 1321 (aged 56) while returning to Ravenna from a diplomatic mission to Venice, possibly of malaria contracted there. He was buried in Ravenna at the Church of San Pier Maggiore, later called San Francesco. Bernardo Bembo, praetor or Magistrate of Venice, erected a tomb for him in 1483. On the grave, some verses of Bernardo Canaccio, a friend of Dante, dedicated to Florence:

The coin is designed by artist Silvia Petrassi and is issued as a €2 piece. It depicts the standing figure of Dante between the mountain of purgatory and the city of Florence, displays the incipit or opening lines of Nel mezzo del cammin di nostra vita. The coin’s design is based on a detail of the painting by Domenico di Michelino (1417 – 1491) completed in 1465 and displayed in the Cathedral of Santa Maria in Florence.

In the centre, the monogram of the Italian Republic “RI” and on the right, is the letter “R” identifying the Italian Mint. Below are the initials of Silvia Petrassi “SP”, and the dates “1265 2015” the year of the anniversary and that of the coin’s issue respectively. The arch-shaped inscription “DANTE ALIGHIERI” and the twelve stars of the European Union are also included.

The FDC version will be packed in a specially designed coin-card together with the 2 euro circulation coin also with a design featuring a profile design of Dante. 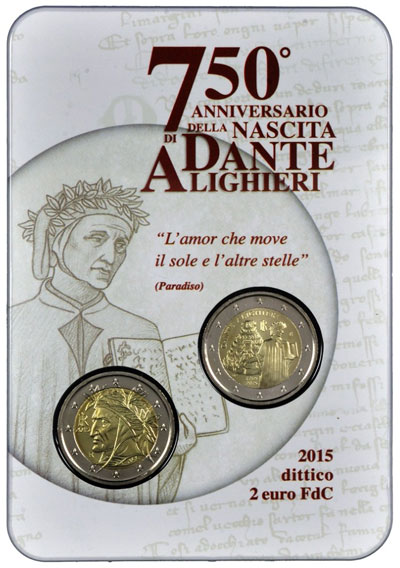 For more information on this and other coins issued by the IPZS, please visit their website at: http://www.zecca.ipzs.it/servlet/articoli?indiceTipo=0&indiceArti=364&indicePezzo=0 Information offered in Italian – international orders dispatched where applicable.