The National Bank of Hungary have issued a new silver coin which celebrates their own establishment 90 years ago whose actual anniversary is on the 24th June.

Preceded by the Royal Hungarian State Bank only in operation since 1921, the National Bank was formed in 1924 with its main function was to stabilize the Hungarian crown or Koruna, which had suffered from inflation since the First World War. The National Bank then proceeded to issue a new currency, the pengo in use from 1927 to 1946. Unfortunately, the Pengo survived only for 20 years and experienced some of the most serious hyperinflation ever recorded. With the co-operation of the National Bank of Hungary – a new national currency, the forint, was introduced on August 1, 1946. Following the nationalization of the central bank and much of the country’s economy at the end of 1947, the banking system was rapidly restructured. Both commercial and savings banks were liquidated and the banking system was reduced to a single-tier system. Starting from the second half of 1948, the National Bank of Hungary became the only financial institution allowed to conduct commercial banking activities in addition to its responsibilities as the central bank. As a nationalized central bank, its management was wholly the responsibility of the government.

On the 1st January 1987 and as a consequence of the fall of the socialist one party government structure, Hungary returned to a two-tier banking system and new commercial banks were once again established and in business. The Parliamentary Act on the National Bank of Hungary which was passed in October of 1991 and amended several times since then has reaffirmed the independence of the Bank and re-established its range of duties. The Hungarian Forint today enjoys a free floating exchange rate and is considered both stable and well managed. As Hungary has been a member of the European Union since 2004, the next step for the National Bank of Hungary will be to integrate the country into the EURO-zone and transition its people from the Forint to the EURO in a timely & orderly manner. 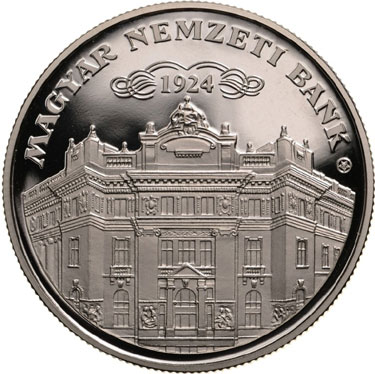 The coin, designed by Gábor Kereszthury is struck by the Mint of Hungary in Budapest. The obverse side includes a detail of the corner of the National Bank’s building – built in 1905, as viewed from Bank Avenue. The inscription in the upper circular legend reads ‘MAGYAR NEMZETI BANK’ in the same logotype as that used for the bonds & shares previously issued as well as the year 1924 in the middle and surrounded by an ornamental frame. The initials of the artist are positioned on the right, next to the edge, between the legend and the building. 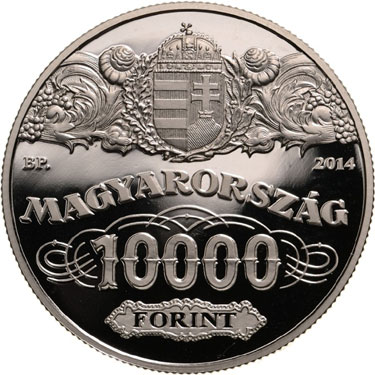 The upper half of the reverse bears a crest surrounded by a floral motif which was featured on the frame of the shares certificates worth 100 gold crowns. Also included is the inscription ‘MAGYARORSZÁG’ along with the value numeral “10000” & the inscription “FORINT” the mint mark ‘BP’ and the mint year of issue “2014”.

The proof quality coin is available either on its own or with presentation box. In an effort to encourage younger generations to collect commemorative coins, The National Bank of Hungary and the Mint of Hungary have teamed up to produce a non-precious metal version of commemorative silver and gold examples to benefit collectors wishing to buy the same artistic theme at a more affordable price. These coins have a nominal value of 2000 forint and are available for their respective face value.

For more information on this and other coins on offer by the Mint of Hungary, please visit their website at: http://coins.hu/ Information offered in Hungarian and English – international orders dispatched.