The Austrian Mint will issue on the 25th January 2012 the first of a new 5 coin gold series celebrating one of the leading luminaries of the art nouveau movement, Gustav Klimt, and his primary subject, women. The series commencing this year also coincides with the 150th anniversary of Klimt’s birth.

Gustav Klimt was born in Austria in 1862 and very early on his artistic gift became evident. He was classically trained, and began his career by painting murals and ceilings in large public buildings. His great love and primary subject however was the female form which was enhanced by his very unique style of painting easily recognized for a blend of both detailed and stylized format for which he became quintessentially known. A founding member of the Vienna Secession Movement – “Ver Sacrum” that officially existed from 1897 – 1905 – it was funded by the government that presented and featured young non-conventional artists. From about 1885 onward Klimt enjoyed his “Golden Phase”, referring to both his critical success and acclaim, as well as his regular use of gold leaf in his paintings. Gustav Klimt died of a heart attack in 1918 at the age of 56. 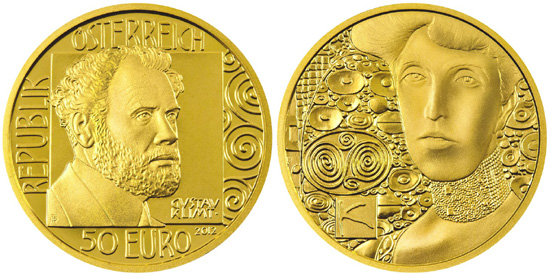 The obverse of this exquisite coin, engraved by Thomas Pesendorfer, includes a portrait of Klimt based on a photograph by Moriz Naehr (circa 1917 – 18) framed in a square. In the bottom right corner of the square is Klimt’s distinctive signature that he used on his many paintings. To the right of the square is a spiral to ornament the coin. The text “Republik Oesterreich” along the face value of 50 euro and year of issue, 2012 is placed on the left, top and bottom side of the central square.

The reverse design, which is engraved by Herbert Waehner, shows a portion of the famous painting of Adele Bloch-Bauer I (the only woman Klimt painted twice, thus, this painting is known as Adele Bloch-Bauer I). Characteristic to this painting is her beautiful long neck which is highlighted with the elaborate choker she is wearing. In the bottom left of the design field is the letter “K”, the first letter of Klimt’s last name.

The coin is struck in .986 fine gold to proof quality only. The diameter of the coin is 22mm and the weight is 10 grams. A maximum mintage of 30,000 pieces is authorized. Each coin is packaged in an attractive box with a numbered certificate of authenticity, which is six pages in length and provides detailed background and technical information about the quality and design of the coin.

The five coin series will be completed in 2016. For more information on this and other coins offered by the Austrian Mint, please visit their website at: http://www.muenzeoesterreich.at/eng