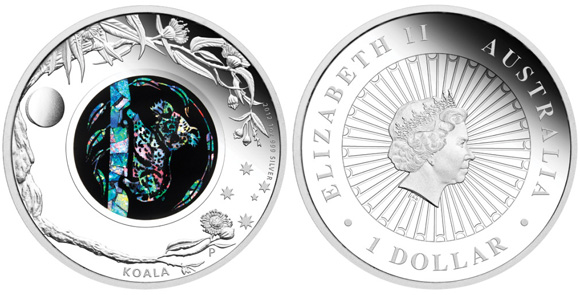 The reverse design for the 2012 Koala Silver Proof Coin features an inner panel with the depiction of a koala in a gum tree in pure Australian Opal. The outer panel depicts Eucalypt leaves and blossoms, the new moon, and a star group known as the Southern Cross, which is only visible in the southern hemisphere. The reverse includes the inscriptions “Koala” and “2012 1 oz 999 silver”, as well as the Perth Mint’s “P” mint mark.

The obverse of the coin features the Ian Rank-Broadley effigy of Queen Elizabeth II placed within a circular pattern. The inscriptions include “Elizabeth II”, “Australia”, and the legal tender denomination “1 Dollar”.

Each coin contains one troy ounce of silver content. The diameter of each coin is 36.60 mm and the thickness is 4.50 mm. There is a limited mintage of 8,000 pieces, with a current limit of one per customer. 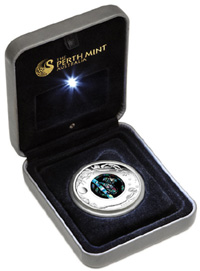 A special display case has been created for the series, with a light that turns on as it is opened. This is intended to represent the moon shining down on the nocturnal animal. The case is packaged within an illustrated shipper with a numbered certificate of authenticity.

The Australian Opal series will include eight coins in total, released at a rate of two coins per year. The coins will feature different nocturnal Australian animals and all eight phases of the moon. The next release for 2012 will feature the wombat.