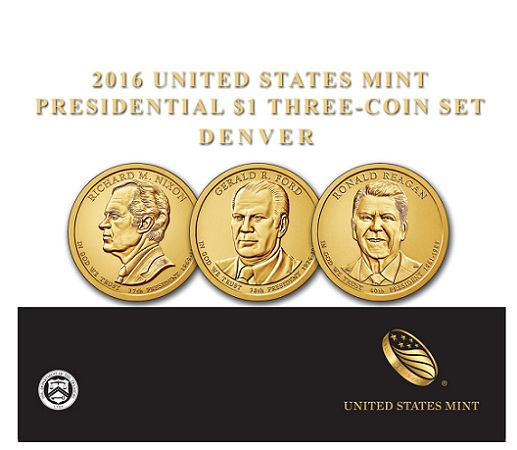 The U.S. Mint is now accepting orders for the 2016 Presidential $1 Three-Coin Sets, which give collectors the chance to purchase all of this year’s Presidential dollars in groups struck at either the Philadelphia Mint or the Denver Mint. The coins carry a circulating finish, though issues in this series are no longer released into circulation. The U.S. presidents highlighted on 2016’s Presidential dollars are Richard M. Nixon, Gerald R. Ford, and Ronald Reagan.

As there have been only three (rather than the usual four) Presidential dollars issued in 2016, these items are priced one dollar lower than those released in previous years; they can be purchased for $11.95 each. Unlike last year’s circulating Presidential dollars sets, which were not assigned product limits, sales of this year’s sets have been capped at 17,000 units for the Philadelphia set and 15,000 for Denver.

The Richard Nixon Presidential dollar features an image of Nixon on its obverse, with RICHARD M. NIXON inscribed along the top of the design and IN GOD WE TRUST, 37th PRESIDENT, and 1969-1974 displayed at the bottom. Don Everhart designed and engraved the obverse of the coin.

The Gerald Ford dollar carries an image of Ford on its obverse, with GERALD R. FORD inscribed along the top of the design and IN GOD WE TRUST, 38th PRESIDENT, and 1974-1977 displayed at the bottom. Phebe Hemphill designed and engraved the obverse.

The shared reverse design for these coins was created and engraved by Don Everhart. It includes an image of the Statue of Liberty beside the coin’s $1 denomination, with UNITED STATES OF AMERICA curving along the rim.

As this series only features presidents who are no longer living, the Ronald Reagan issue marks the conclusion of the program, which launched in 2007. For more information on the U.S. Mint’s Presidential $1 coins, please visit the Mint’s Web site.