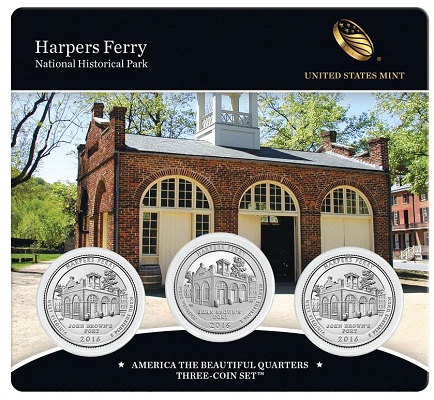 The U.S. Mint is now accepting orders for the Harpers Ferry National Historical Park Quarter 3-Coin Set, which includes one Uncirculated quarter from the Denver Mint, another from the Philadelphia Mint, and a Proof quarter struck at the San Francisco Mint. This set has no listed restrictions on production or orders per household, and is available for $9.95.

The coins are packaged in a plastic case that displays each quarter’s obverse and reverse. A photograph of the actual site is included on the front of the holder, while a description of the location is placed on the back, with a certificate of authenticity.

The reverse design for the Harpers Ferry National Historical Park quarter was created by Thomas Hipschen and engraved by Phebe Hemphill. It features an image of John Brown’s Fort, where Brown and his men made their last stand during a raid on the Harpers Ferry Armory. Inscribed along the rim are HARPERS FERRY, WEST VIRGINIA, E PLURIBUS UNUM, and 2016. JOHN BROWN’S FORT is also included in the field below the building. The obverse includes John Flanagan’s 1932 portrait of George Washington, along with the inscriptions UNITED STATES OF AMERICA, LIBERTY, IN GOD WE TRUST, QUARTER DOLLAR, and a mint mark.

Harpers Ferry National Historical Park was established on June 30, 1944, and includes land in West Virginia, Maryland, and Virginia. The Harpers Ferry quarter is the 33rd release in the Mint’s ATB series, which will conclude in 2021 following the issue of its 56th design. All five of this year’s quarter designs can be viewed here.