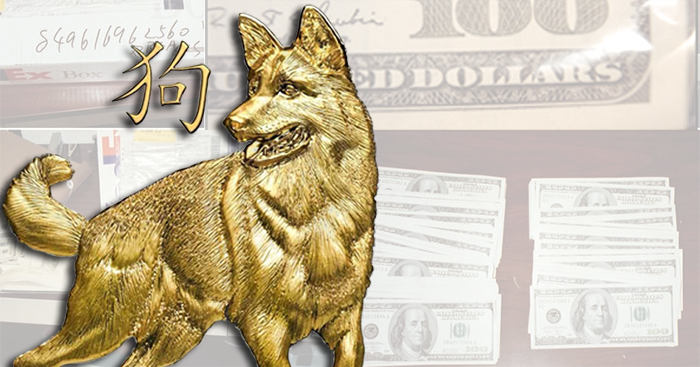 In the background: Secret Service photos from counterfeit-currency sting Operation Smoking Dragon. In the foreground: the gold-plated dog from Niue’s 5-ounce silver Year of the Dog issue. (Photo courtesy of the PAMP Mint)

Dogs are renowned for their almost supernatural sense of smell and have been used for years by law enforcement to solve some of the most complicated crimes ranging from drug smuggling to cold-blooded murder. In 1997, the world was introduced to the first counterfeit-sniffing dog, named Mike, and the concept has rapidly gained popularity ever since. The excerpt below, which is from the Stamp & Coin Place’s “Past and Present” blog, explores this powerful tool in the war on counterfeit currency.

On February 16, 2018, we will be welcoming the Chinese New Year, and it turns out that—appropriately—2018 will be the Year of the Dog. To commemorate this momentous occasion, which only happens once every 12 years, mints around the world are issuing themed coins. Our sister site World Mint News Blog recently covered the Royal Canadian Mint’s issues: a half-ounce silver $10 Specimen; an 18-karat, $150 gold Proof; and a silver Lunar Series $15 Proof. Check back with Coin Update and World Mint News Blog in the coming months as we feature delightful new Year of the Dog issues from around the world.

Dogs have been trained to help humans for thousands of years; some experts believe dogs were domesticated nearly 15,000 years ago, possibly even earlier. Dogs have helped humans protect crops and cattle, pull loads, and more. Now, dogs are even being trained to help combat counterfeiting.

While Columbia produces a vast amount of the circulating counterfeits, forgers in North Korea and Eastern European nations are also getting in on the game. These operations are almost always part of organized crime syndicates, and taking them down is a delicate operation, involving intense cooperation between the Secret Service and the government of the country involved. Counterfeiting helps fund not only organized crime, but even terrorism, and is important to keep in check for reasons beyond the obvious financial and economic impacts . . .

Canada: “Locomotives across Canada” steams away with second silver coin in series