The Government of the Principality of Andorra and the Servei d’Emissions de la Vegueria Episcopal (Andorran Mint) will submit their chosen designs to the European Commissioner for Economic and Monetary affairs later on this year for final approval leading up to the production of official Andorran EURO coins.

After the Government of Andorra’s application requesting the right to produce EURO coins was submitted to the Council of Europe in 2003, an agreement where the EURO was approved as the sole legal tender was put into force on the 1st April 2012. As part of the agreement, the right to produce Andorran coins was also agreed to which permits the small Principality, located in the eastern Pyrenees Mountains and bordered by both Spain and France to produce up to 2.5 million coins for its general use. This right was granted which allows for the production to commence from the 1st July of this year, but it has been confirmed that the Andorran Mint will not issue the coins until the 1st January 2014.

The designs of the coins are the result of a nation-wide competition which was concluded on the 16th April. They include wildlife, churches and frescoes and will be divided by the smaller three denominations sharing one uniform design, the three middle denominations also sharing one uniform design, the one Euro and two euro coins depicting individual designs. All coins are illustrated with the year “2014” which it is believed will be their first year of issue. The Andorran Mint expect to produce final models of the coins by September and the consignment of circulation coins will be produced by both the Real Casa de la Moneda in Spain and the Monnaie de Paris in France. 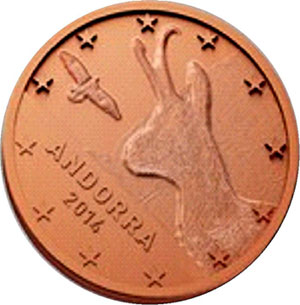 1, 2 and 5 Cents: Depicting the head of the Pyrenean chamois, a goat antelope animal which is native to the mountainous region, it is one of the national wildlife symbols of the principality. Along with the Pyrenean Chamois, an eagle is seen just to the left side in flight. The design incorporates the traditional twelve stars, representative of the original members of the European Union organised by the Maastricht Treaty in 1992. The name and year of issue is positioned diagonally towards the left side of the primary design. The design of the coins is the work of Ruben da Silva. 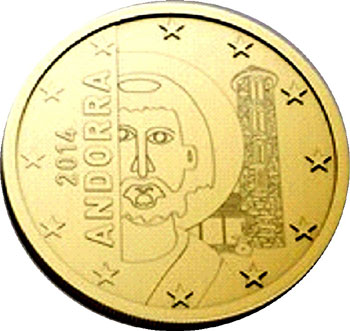 10, 20 and 50 Cents: Depicting a portion of the Fresco of Christ in Majesty, the Fresco itself is located in the Església de Sant Martí de la Cortinada, a church whose origins begin in the 12th century. The present church was primarily built in the 17th and 18th century. A singular white watchtower is distinctive of this church which is also depicted on the three values along with the 12 stars. The name of the country along with the year of issue is positioned vertically and to the left of the primary design. The design is the work of the studio Moles Disseny, Escaldes-Engordany. 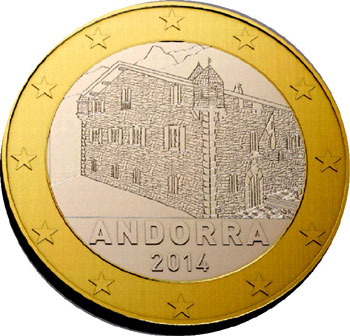 1 EURO: Depicted is the Casa de la Vall (Valley House) home of the Consell General or the Andorran Parliament. Dating from the 16th century, it is the country’s historic parliament building and one of the capital’s oldest buildings. Around the design is the ring of 12 stars. The name of the country along with the year of issue is positioned horizontally and just under the primary design. The illustration is the work of Jordi Puy. 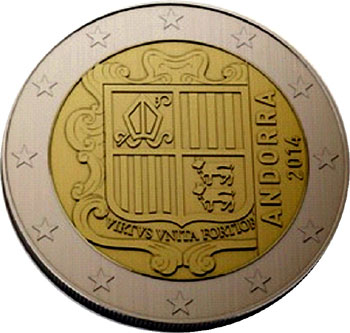 2 EURO: The Principality’s coat of Arms, one of the designs appearing on the coins which had been decided on early and incorporated into the present series. The ring of 12 stars appears around the crest and the name of the country along with the year of issue is positioned vertically and towards the right of the primary design.

Further notices about commemorative & collector’s coins to be issued for the occasion of the introduction of Andorran EURO coins will be released as the information becomes available. For more information on the new coins, please visit the website of the Andorran Mint at: http://www.andorra-euro.com/  Information is offered in Catakan, Spanish, English, French and German.