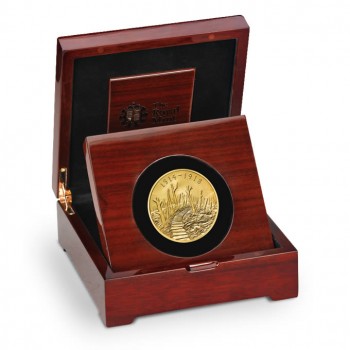 The Royal Mint has launched the second release in their “100th Anniversary of the First World War” series, continuing an observance of the centenary of the Great War that will last five years, mirroring the duration of the war itself.

With political tensions growing between great and small states in Europe, and continuing calls for independence by many territories within the expansive Austro-Hungarian Empire, the spark that would ignite the ferocious fighting to come was struck in June 1914. Gavrillo Princep, a Serbian anarchist and member of a secret military organization called the Black Hand, assassinated the heir to the Austrian throne during a visit to the Bosnian capital, Sarajevo. This act, which served to instigate World War I, was later referred to as the “shot heard round the world.”

By August of the same year, war had broken out after the German Empire honored treaties with Austria-Hungary and mobilized forces against Serbia, who was accused of supporting the aspirations of the Black Hand, and Russia, a key supporter of Serbia. Great Britain and France entered the conflict as allies of Russia in an attempt to lessen the fighting and enable their diplomats to negotiate a peace between the belligerent powers. Within months, however, the fighting had escalated to include more states in the Balkans, the Ottoman Empire (who supported the Central Powers of Germany and Austria-Hungary), and eventually the United States, which came to the aid of Great Britain and France.

In the midst of this conflict, Russia’s own revolution had come into full force, ultimately toppling the centuries-old monarchy and culminating in the abdication of its Czar, Nicholas II. In the end, after more than four-and-a-half years of fighting, three European empires and the Ottoman Empire in Asia Minor had ceased to exist. Many states were born, including the Kingdom of the Serbs, Croats, and Slovenes (later Yugoslavia), which brought together Slavic states under one crown, the primary aspiration of the Black Hand.

The reverse side of the coins was designed by world-respected sculptor, James Butler. The inspiration for this design came from Butler’s years of research into the First World War for the 42nd Rainbow Division, for whom he created a memorial inaugurated in 2011. It includes a haunting scene depicting a path of duckboards flanked by war-ravaged trees. Along the muddy ground, we see the faint outlines of indistinct figures – soldiers that laid down their lives, now lost in the mud, with no hero’s grave. The commemorative years 1914 – 1918 are placed above the primary design. The obverse includes the fifth definitive portrait of Queen Elizabeth II as designed by Royal Mint engraver Jody Clark, in use since March of this year.

These are the second coins in the Royal Mint’s five-year program of First World War five-ounce gold and silver commemorative coins. Both are available in .999 fine gold or .999 fine silver and are accompanied by an informative booklet created in collaboration with the Imperial War Museum. For more information on this and other coins offered by the Royal Mint, please visit their Web site. Information is offered in English, with international orders dispatched where applicable.