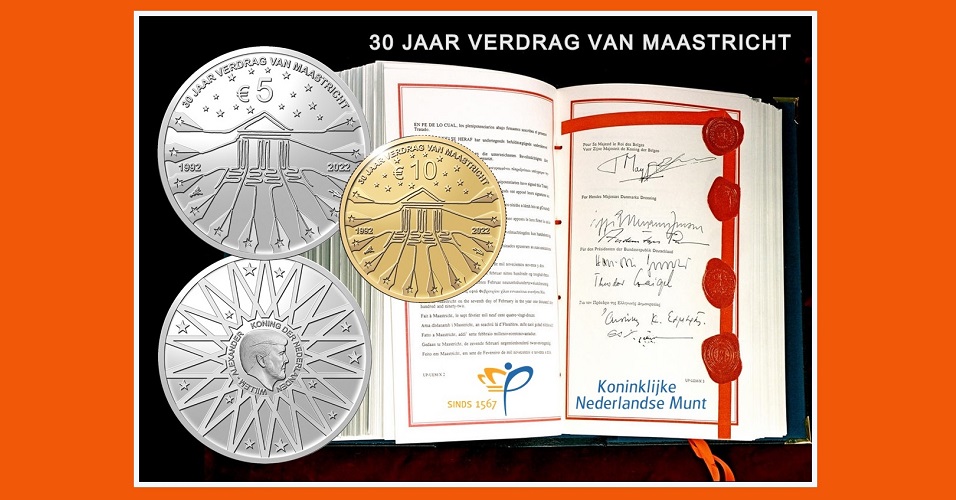 The Royal Dutch Mint has launched (24th February) new gold and silver commemorative coins which remember the day 30 years ago that transformed European Economic Community into the European Union. On 7th February 1992, it was exactly 30 years since the Maastricht Treaty was signed and became one of the most important pillars in the founding of the European Union. First ratified, the treaty was then signed by representatives of each individual government comprising the-then 12 members of the European Economic Community. These countries were Belgium, Denmark, France, Germany, Greece, Ireland, Italy, Luxembourg, Portugal, Spain, the Netherlands. and the United Kingdom. Of particular importance was the aim of further integration both economic and in areas where judicial and legislative matters affected the whole of the newly renamed European Union (EU). More importantly, the Maastricht Treaty outlined the eventual development and subsequent issue of a single currency to be used throughout the EU. While three member states negotiated an “opt-out” clause — Denmark, Sweden, and the United Kingdom — future EU member states would, as part of joining the European Union, pledge to join the single currency at a time when their economies supported the criteria to integrate their economies into the monetary union. The Maastricht Treaty became effective on the 1st November 1993 and by 1994, the European Monetary Institute was established to further the development of the European system of central banks which would make up the euro-zone. The establishment of the euro, the single currency, was created on the 1st January 1999 as the result of the Maastricht Treaty, though only as a virtual currency. This year, the euro currency is celebrating its 20th anniversary as an instrument of legal tender, now throughout 19 member states of the enlarged European Union.

The coins are designed by artist Rinus van Hall, whose reverse side includes a linear stylised depiction of the government building in Maastricht, where the treaty was signed, along with 12 ink pen tips representing those who signed the document. On the left and right side of the temple towards the edge are the commemorative years 1992 and 2022. Each pen tip has a five-pointed star superimposed over it. In the field over the temple are 15 additional five-pointed stars representing the member states of the European Union that joined since the treaty was signed in 1992. The text above the primary design reads 30 JAAR VERDRAG VAN MAASTRICHT and just under the inscription is the coins’ denomination of €10 (gold) or €5 (silver).

The obverse side includes an effigy of HM King Willem-Alexander, his image is surrounded with the legend WILLEM-ALEXANDER KONING DER NEDERLANDEN and a connected pattern of stylised quill pen tips and 12, five-pointed stars in various placements representing the original 12 EU member-states. These are the first commemorative coin with the new privy mark of a raven, denoting the name of the Royal Dutch Mint’s recently appointed mintmaster Bert van Ravenswaaij.

All coins are available to order from the 24th February, the first strike of this coin will take place on King’s Day the 27th April, with dispatch commencing from that day. Both the Uncirculated and Brilliant Uncirculated €5 coin are sealed in a coin-card format. The silver Proof coin is presented in a colourful folder and includes images of the signing of the treaty and specifications of the coin.

The €10 gold Proof-quality coin is encapsulated and presented in a custom wood-branded Royal Dutch Mint case, along with a certificate of authenticity. For additional information about these coins, please visit the website of the Royal Dutch Mint.

* First day of issue, a coin-card issued in a numbered coin-card and first day envelope with a unique date stamp and signed by the mintmaster.