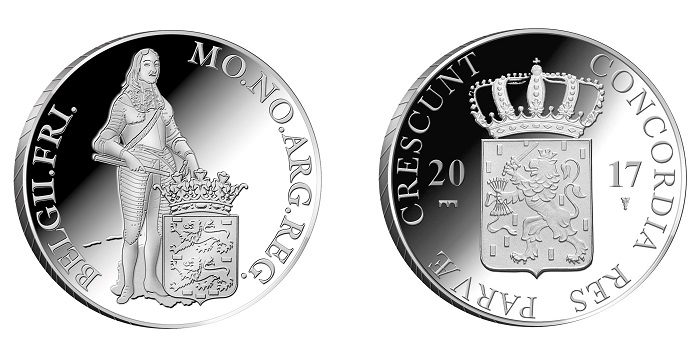 The Royal Dutch Mint have issued (15th December) the latest silver ducat in their present series entitled “The Twelve Provinces,” which highlights all of the provinces which comprise the current Kingdom of the Netherlands. The traditional trade coin, which was a staple of European commerce in addition to many colonial states in the Americas, Asia, and Africa, is re-created to exact specifications and issued in a variety of designs. The current coin is the eighth issue in the present series, depicting various knights associated with the twelve provinces.

This third coin, dated 2017, focuses on the Province of Friesland and depicts the stadtholder of Friesland, William Frederick (1613–1664), count of Nassau-Dietz, Groningen, and Drenthe. As the second son of Ernest Casimir I, count of Nassau-Dietz, it wasn’t entirely likely that William Frederick would be in line for the career he eventually would follow. He was a student at the Leiden University and the University of Groningen. After his education was completed, he took a commission in the army of the Dutch Republic, much in the same way his male ancestors had done, including his older brother. In 1640, William Frederick’s elder brother Henry Casimir died in action near the city of Hulst in the southwestern part of the Netherlands. Since Henry Casimir was unmarried and had no children, William Frederick inherited his titles. William Frederick was married on the 2nd May 1652, to Albertine Agnes of Nassau (1634–1696), who was the fifth daughter of Frederick Henry, prince of Orange, and had three children.

The historical province of Friesland (or Frisia as it is locally referred to) is one of the country’s most important regions in terms of history and Dutch culture. It is situated west of Groningen and is located northwest of Drenthe and Overijssel. In 1588, The Lordship (province) of Frisia joined with six other lordships to form the Dutch Republic when a significant part of the lowlands separated from Spanish rule. The six other provinces were the Duchy of Guelders, the County of Holland, the County of Zeeland, the Lordship of Utrecht (formerly the Episcopal principality of Utrecht), the Lordship of Overijssel, and the Lordship of Groningen and Ommelanden. In actuality, there was an eighth province which was the County of Drenthe, but since the area was so poor that it was exempt from paying federal taxes, it was consequently denied representation in the new States General assembly. Today, Friesland is a thriving province with a population of more than 646,000 persons whose territory is comprised of a total area of 5,100 square kilometres (2,000 square miles). Friesland’s economy is still heavily reliant on agricultural activity, specifically dairy products, and their internationally known black and white Frisian cattle. Friesland is also known worldwide for their distinctive black and white Stabyhoun breed of dogs and the black Frisian horse which also originated in this part of the lowlands. 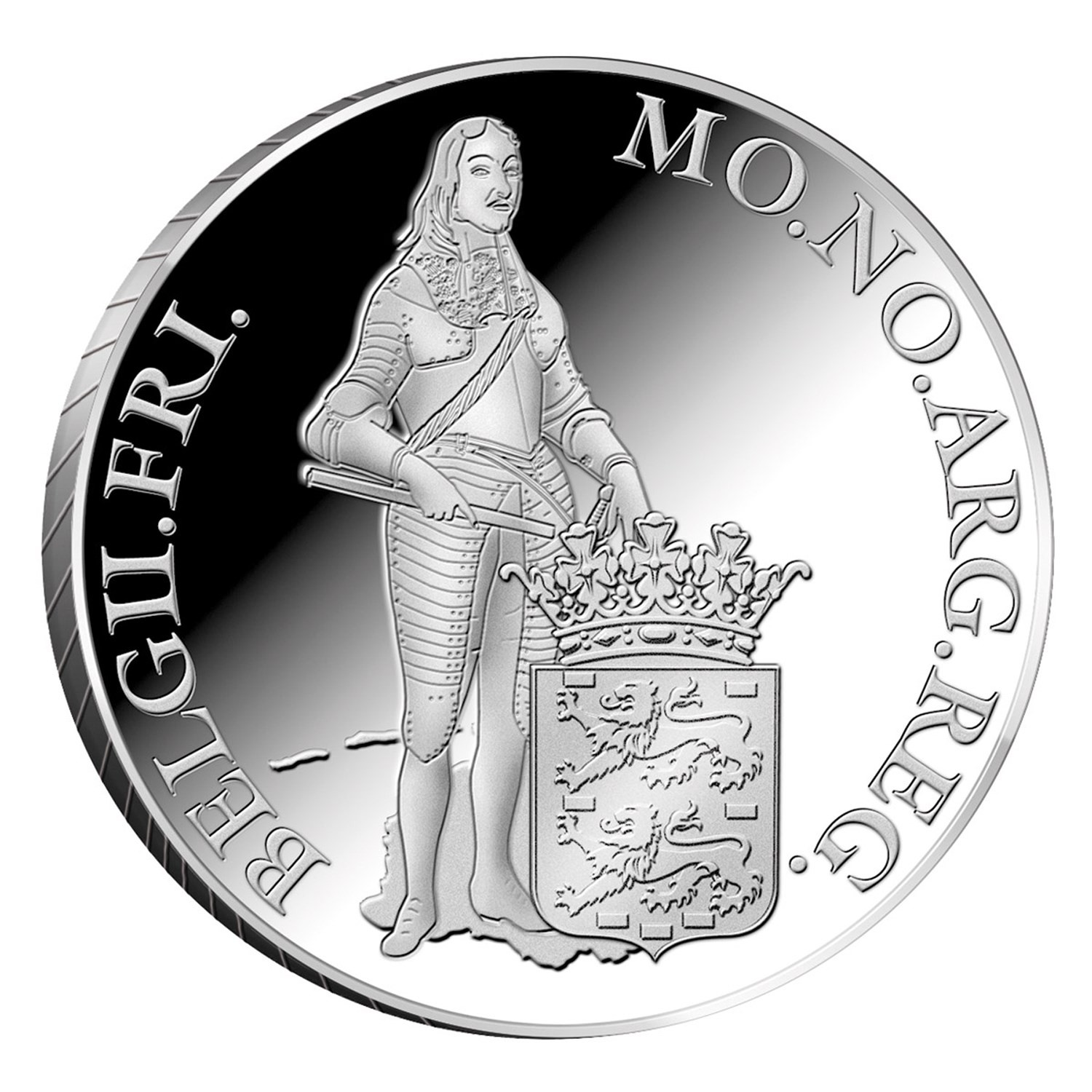 The obverse side of the coin depicts a standing Willem-Frederik of Nassau-Dietz, Count of Nassau-Dietz, whose seat was in Groningen and Drenthe. He is donning the armour of the Anonymous Knight and standing over an outline of the historical boundaries of the province of Frisia while being accompanied by the shield of the province. The crowned crest consists of a blue shield with two gold lions and seven billets (or rectangles), said to be derived from the arms of the Frisian King Radboud (circa 800 AD). The Latin inscription around the coin MO: NO: ARG: REG: BELGII: TRAJ translates to ”New Silver Money of the Belgian Kingdom, county of Frisia.” 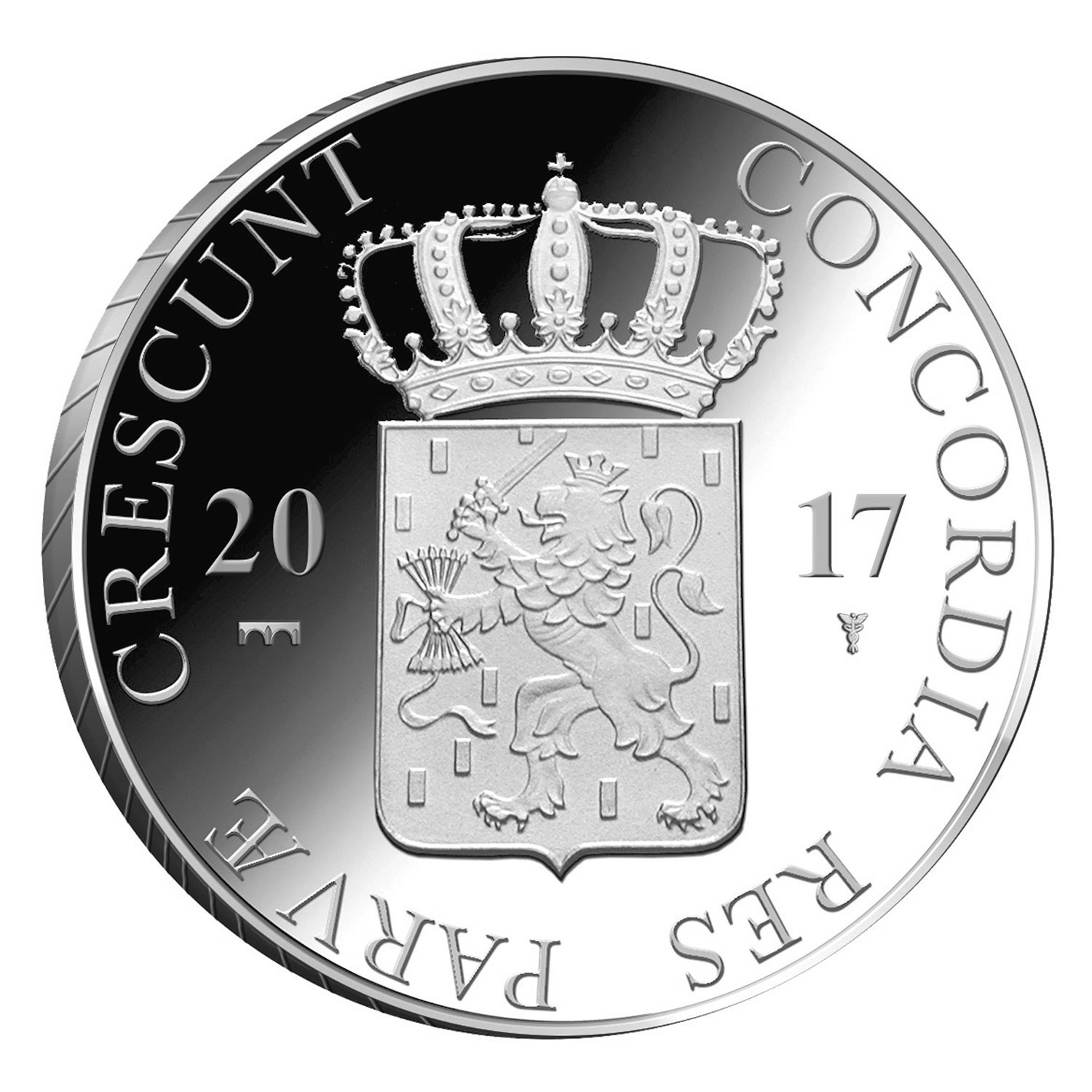 The reverse of the coin includes the modern Dutch crest, crowned, along with the year of issue seen as two digits on either side of the shield. The Latin text around the crest reads CONDORDIA RES PARAVE CRESCUNT, or, “In harmony small things grow.” 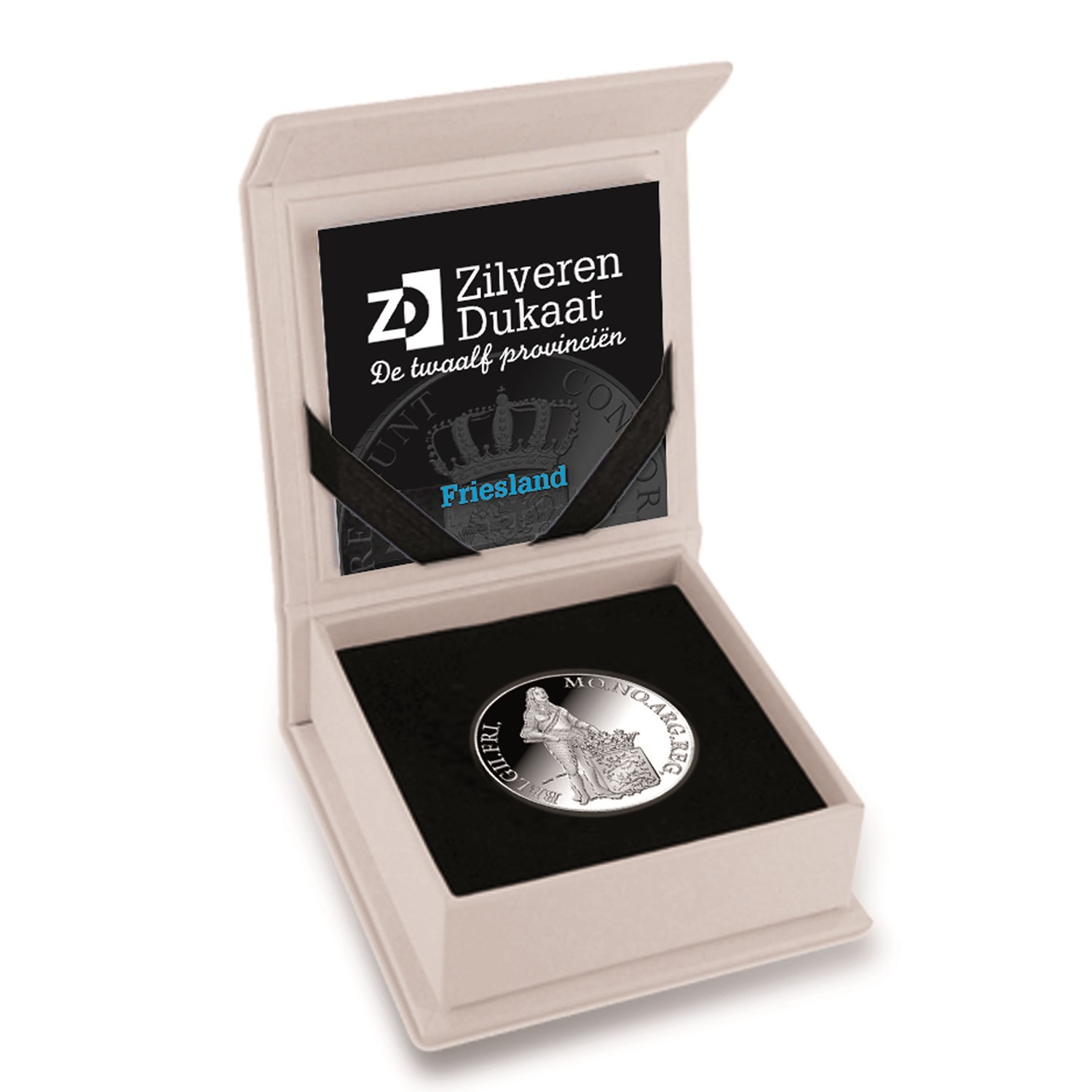 The latest silver ducat will be the first coin to include the Royal Dutch Mint’s new mint master’s insignia (or privy mark), which was introduced after the appointment of Stephan Satijn in October. The new privy mark is that of St. Servatius’ Bridge in Maastricht. The Dutch silver ducat continues to hold the status of a legal tender coin in the Netherlands and has been in continuous production since the years of the Dutch Republic (1581-1795). The new examples continue to be struck in the standard .873 silver fineness commonly used for this type of trade coin. The overall design of this popular series will change after all 12 Dutch provinces have been represented. Four more are to be issued in 2018 and 2019. The coin is housed in a capsule and custom case along with a certificate of authenticity and printed background information. For additional information on this and other coins offered by the Royal Dutch Mint, please visit their website.