The first Netherlands commemorative coin of 2018 is dedicated to the city of Leeuwarden, designated as the European Culture Capital for 2018. The city is the capital of the province of Friesland and is a 1.5-hour drive north of Amsterdam. Much of the province is below sea level and is known for huge protective dikes, waterways lined with swaying reeds, traditional old windmills, windswept beaches, and marshes rich with bird life. Leeuwarden has been inhabited since the 10th century and was granted the status of a city in 1435. Its most famous resident was Mata Hari, the exotic dancer who was convicted of spying for Germany during World War I and was executed by France.

Frieslanders are proud people known for their 11-city, 124-mile ice-skating race, the Elfstedentocht, held only when the weather is cold enough to freeze miles of canals. It was last held in 1997. The local Fries language is closer than any other to English.

The Royal Dutch Mint describes the obverse, with the legally-required head of King Willem-Alexander at its center, as “a sense of centuries-old Frisian craftsmanship techniques of woodcarving and mint craft come to life” through the use of modern digital and 3-D printing techniques. The result is what can be thought of as both a weathered seal and a contemporary object.

The reverse depicts some features symbolic of Friesland — the jewels of Mata Hari, the water, Frisian sailboats and horses, water lily leaves from the provincial flag, and the horn of culture and festivities. 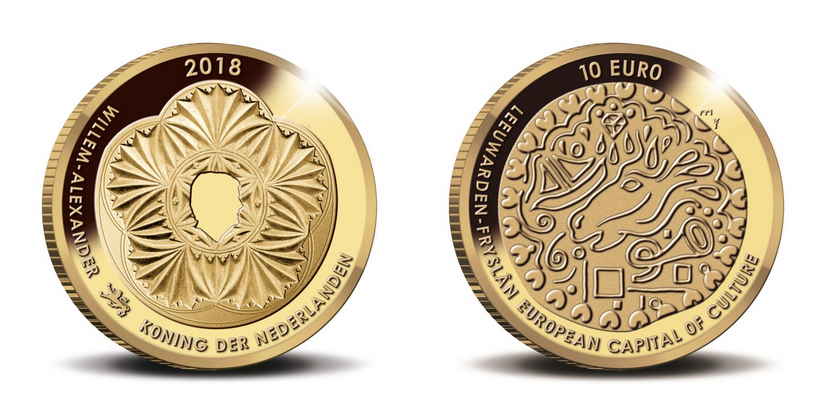