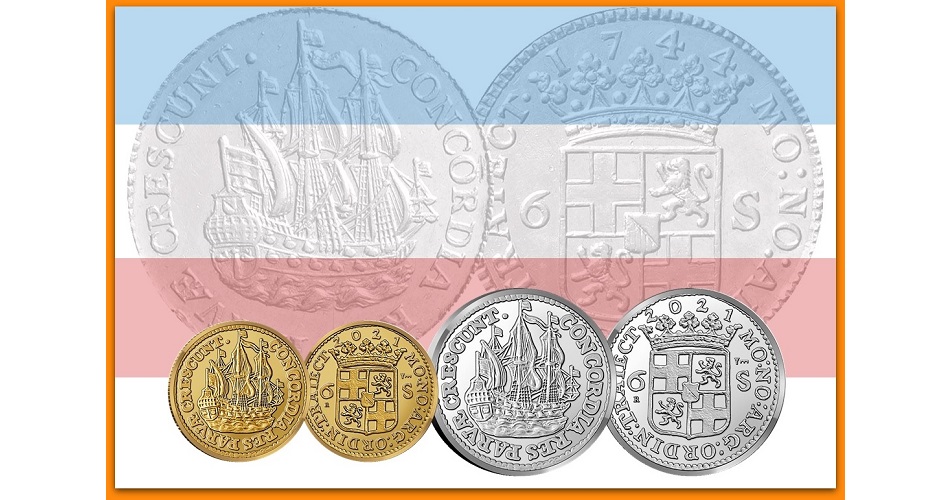 The Royal Dutch Mint has launched (11th November) new silver and gold coins which recreate one of the country’s most well-known and historic coins that greatly increased trade during the late 17th and much of the 18th century. The Scheepjesschelling is one of the Netherlands’ most distinctive coins, partly because of their attractive design, which includes a tall war ship and the popularity and reliance of the coins during their years in use.

The coins themselves were the result of a decree introduced by the Staats General, the Parliament of the Dutch Republic, on the 9th November 1670, in an effort to restructure coinage. A new silver coin would eventually replace inferior circulating coinage, but for the time being and similar to most trade-type coinage, they were minted exclusively for use in the Dutch colonies and were not legal tender in the Republic. As such, the design would both reflect two important aspects of the Dutch Republic, that of an influential seafaring power and a prolific trading entity in Europe and around the world.

The coins, weighing about five grams with a diameter of just over 25 millimetres and minted from a silver fineness of 58.3 percent, depicted an appropriate design to emphasise their initial use. The obverse included the image of a tall-masted warship. The design of the coins is attributed to Daniël Drappentier, noted medallist and engraver to the court of Willem, Prince of Orange-Nassau. The reverse side displayed the coin’s face value of six stuivers with the numeral “6” and a large letter “S” placed on each side of the coat of arms of the province that minted the coin. Due to their specifications, these coins were considered equal in value to Britain’s six pence or half shilling silver coins and saw some circulation in British possessions overseas in proximity to Dutch colonies. The Scheepjesschelling (ship’s shilling), as they soon became colloquially known, were quite popular because they were a trusted form of coin and widely accepted internationally, which also proved to be very useful in the trade in the Far East. In the course of the 18th century, Utrecht, Zeeland, and Gelderland would issue these coins, which included, on the obverse, their own crest and the ship on the obverse. After about 123 years in use, the last Scheepjesschelling was minted and issued in 1794. 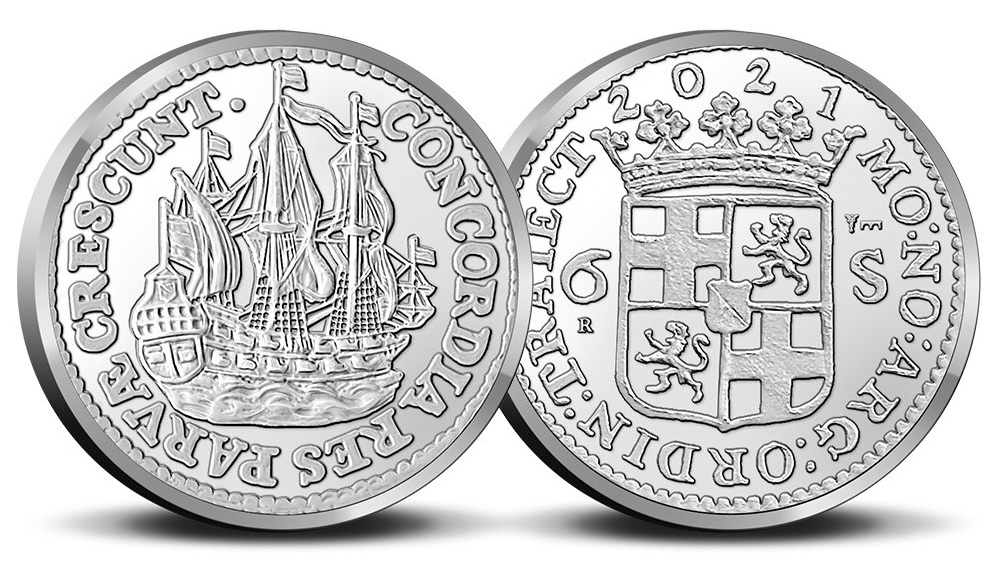 The new gold and silver coins dated 2021 recreate the design of the Scheepjesschelling, depicting a warship with a flag on the stern and the inscription CONCORDIA RES PARVAE CRESCUNT. This legacy motto of the Netherlands is often translated as “Unity is Strength.” 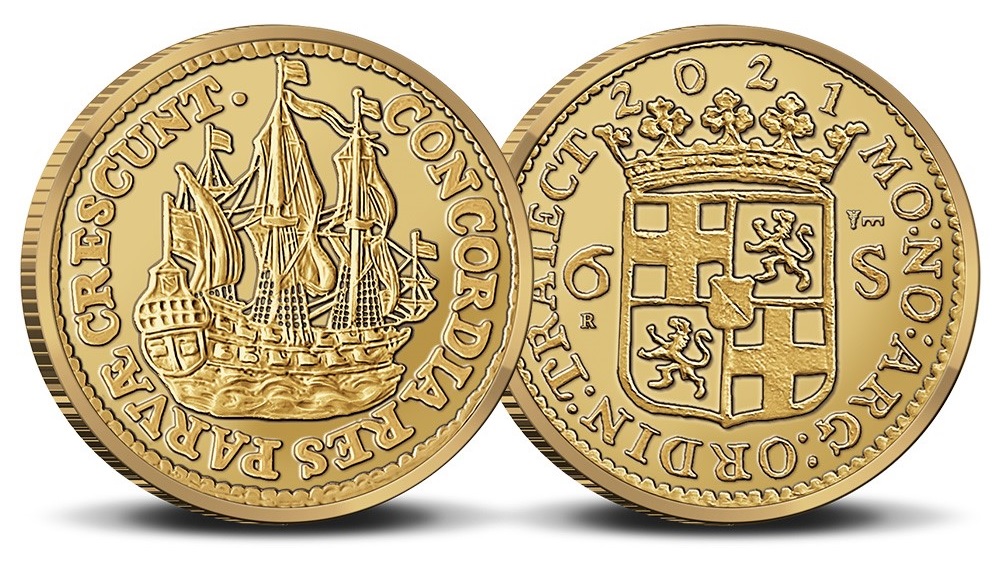 The reverse shows the crowned coat of arms of the province of Utrecht and the caption MO: NO: ARG: ORDIN: TRAIECT (in full Moneta Nova Argentea Ordinum Traiectum), which translates to “New Silver Coin of Utrecht.” 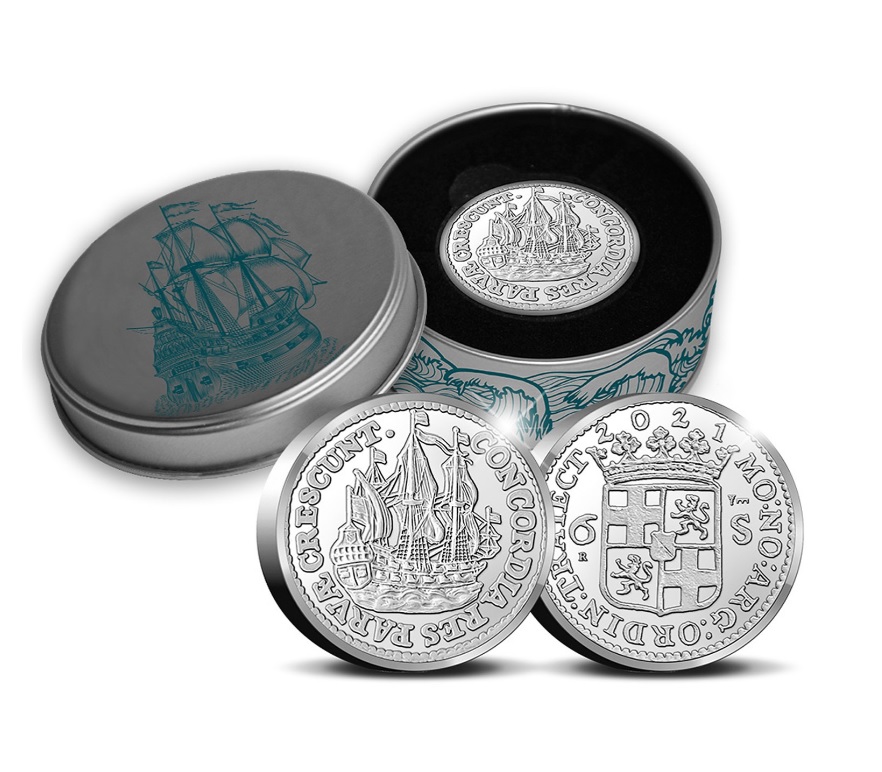 Available to order now for delivery commencing in February 2021, the silver restrike of the Scheepjesschelling comes in a pressed tin round-shaped case, including a numbered certificate of authenticity. 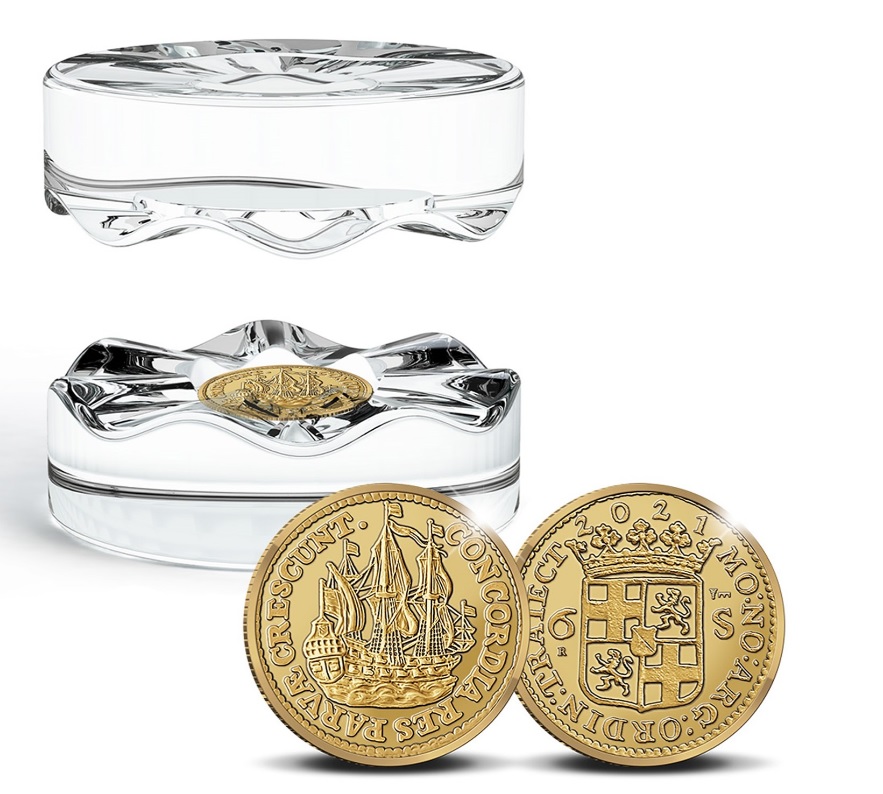 In collaboration with Royal Leerdam Crystal, the gold coins are presented in a uniquely wave-shaped crystal coin holder and include a numbered certificate of authenticity. For additional information about these and other coins released by the Royal Dutch Mint, please visit their website.

Netherlands to issue 2020 gold ducats by reservation only