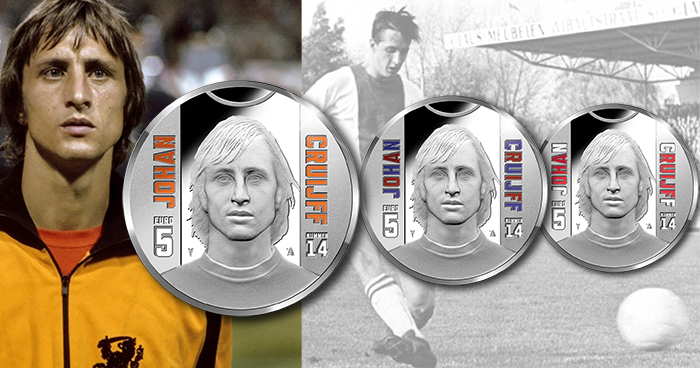 The Royal Dutch Mint have launched (5th September) new coins in gold and silver which honour one of the country’s more noteworthy footballers. Johan Cruiff (sometimes spelled “Cruyff”) is remembered as one of the Netherlands’ most talented players on the football pitch and, later, as a national team coach and manager. He not only brought Dutch players into the international spotlight but also intensified the game to even further heights in a country already considered ardent football enthusiasts.

The coin is designed by artist Hennie Bouwe, with the reverse side inspired by a photograph of Cruijff taken during the height of his career in the early 1970s, in which he is wearing a jersey with the national colours and team’s logo (as shown on the coins’ packaging; see below). His iconic number 14 is placed to the right side with the coin’s denomination seen on the left.

The obverse depicts HM King Willem-Alexander with the king’s legend running fully around his effigy.


The coins are available in a variety of options, ranging from Uncirculated silver-plated copper, to sterling silver Proof, to gold Proof. The silver Proof pieces are also available in a three-coin set with colour applications relevant to the more predominant teams Cruijff left a mark on. The total mintage of 7,500 pieces includes the colourised coins in the three-coin set. For additional information on these and other coins offered by the Royal Dutch Mint, please visit their website. The Royal Dutch Mint dispatch orders only to European destinations.

Editor’s note: As of this posting, all options of the Johan Cruijff collector coins have sold out at the mint. Your local coin store may have them or may be able to get them for you; you can also check out reputable ebay vendors with excellent feedback ratings.

Hendrik Johannes Cruijff (1947–2016), known as Johan, is widely regarded as one of the greatest players in football history, and in 1999, he was voted European Player of the Century. On the 15th November 1964, he made his official debut in the Dutch league playing for the club Ajax, which lost in Groningen 3-1 to GVAV. It was a loss for his club, but Cruijff scored the only goal for Ajax in the match. Cruijff would spend the next decade with Ajax but then decided to move to Barcelona. This change was facilitated when his teammates disappointed Cruijff by electing Piet Keizer to be captain of the Amsterdam-based club. With a move to Spain, he was also able to sign a much more lucrative contract. Barcelona welcomed him by nicknaming him “El Salvador,” which he earned in his first year, amazing the socios by leading Barcelona to their first national championship in 14 years. In Madrid, Barcelona humiliated Spain’s favourite Real by beating them 5-0.

In 1978, Cruijff announced his official retirement. However, he couldn’t resist playing again, not for financial reasons but because he simply missed playing the game. This time, Cruiff made the move to Los Angeles, where the popularity of European football (or soccer) players was at fervour levels. He signed to play for the Aztecs and joined forces with fellow international players Pelé and Franz Beckenbauer, who were also in the North American Soccer League, and brought the “beautiful game” to the Americans. Within the year, Johan Cruijff moved to the Washington Diplomats, which for him was a good move. By the end of that season, he was chosen American Player of the Year for the second time in a row.

Some have speculated that Cruijff was influenced by some annoyance at his former home team when he did the unthinkable in 1983 and moved from Ajax to rivals Feyenoord. Supporters in Rotterdam were not too keen on Cruijff defending their colours, but their scepticism soon vanished. Nineteen years and six months later after the start of his national career, he played his last match as a Feyenoord player, scoring against FC Zwolle. In total, Johan Cruijff played in 48 international tournaments for the Netherlands and scored an astonishing 33 goals during this time. He was named captain of the Dutch National Team 34 times. 19 years and six months later, he played his last match as a Feyenoord-player against FC Zwolle. He scored in his last match. Johan Cruijff played 48 internationals for Holland (33 goals) and was 34 times captain of the Dutch national team.

Cruijff is also remembered as the founder of the football philosophy known as “total football.” After his permanent retirement as a player in 1984, Cruijff became highly successful as manager of Ajax (and later FC Barcelona) and also embarked on a career as a trainer, imparting his knowledge and skill as a footballer to younger players in addition to founding the Johan Cruyff Foundation. He continued to engage in worldwide initiatives to get children moving—especially children who need some extra support through sport, which is a universal language for children.

Johan Cruijff was diagnosed with lung cancer in October 2015, and succumbed to the illness shortly thereafter. He died on the 24th March 2016, at his home in Barcelona at the age of 68. He was survived by his wife, Danni, and their three children: daughters Chantal and Susila, and son Jordi (who followed in his father’s footsteps and became a football player himself).

During his early days as a young player for the national team, Cruijff was asked about uncertainty and the outcome of a game. He replied:

You do not know the final standing, but you must never be influenced by that. 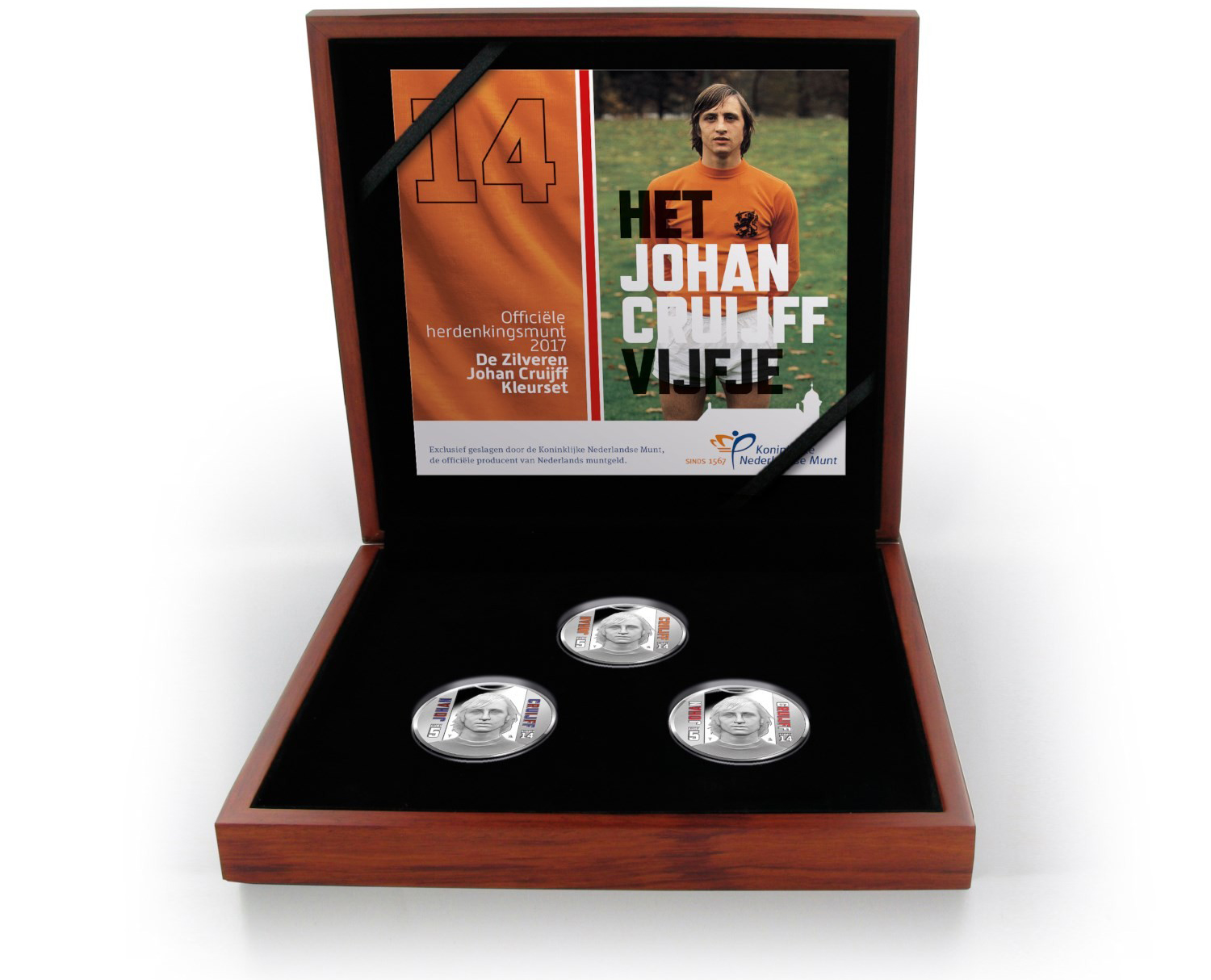