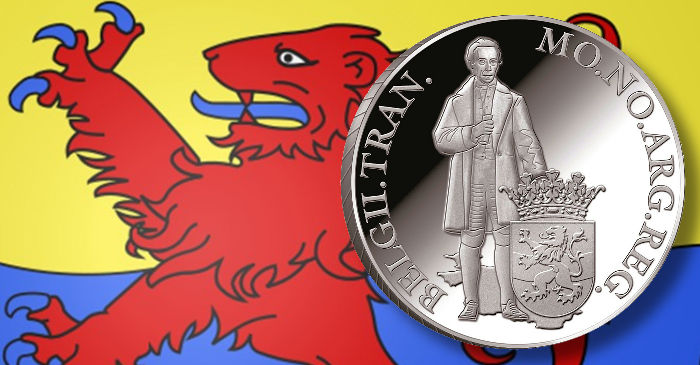 The Royal Dutch Mint have launched (8th February) the latest design for their first silver Ducat dated 2018. The province featured on this coin is Overijssel, which is a member of the traditional Dutch provinces with a strong connection to Europe’s Hanseatic League and the cities associated with it. The coin is part of the current series “The Twelve Provinces,” which highlights all of the provinces that comprise the current Kingdom of the Netherlands.

This fourth coin in the current series features the province of Overijssel and also a depiction of the standing figure of Johan Rudolf Thorbecke (1798–1872), who is remembered in Dutch history as the founder of parliamentary democracy in the Netherlands. Thorbecke was instrumental in almost single-handedly drafting the revision of the constitution of the Netherlands, which lessened the royal prerogative of the king and introduced more power to the States General (or the bicameral legislature). Thorbecke’s draft resulted in several substantial changes in Dutch society as it guaranteed more religious, personal, and political freedom to the people, but it also led to a royal crisis. King Willem II, who reigned from 1840, declared that he did not wish to remain as the Dutch sovereign under the restrictions which the crown was now subject to and had thought about abdicating in favour of his eldest son.

However, with revolutions spreading all over the European continent from France into the Austro-Hungarian Empire, in an effort to preserve the kingdom, the king thought it better to abdicate and decided to institute a more liberal regime. He was later convinced to believe it was better to grant reforms instead of having them imposed on him on less favourable terms later. He swore in his first and only cabinet under the terms of the new constitution a few months before his sudden death in Tilburg, North Brabant, on the 17th March 1849.

Thorbecke was born in the city of Zwolle, the administrative capital of Overijssel, in 1798 to a family of German heritage — his father being a prominent tobacco trader. The family business went bankrupt during the French occupation of the Dutch provinces due to their unwillingness to trade with British exporters. Despite the family’s lack of income, Thorbecke received a suitable education and excelled in his studies. Initially training to become part of the teaching profession, Thorbecke did become an extraordinary professor who lectured on the subject of politics. In 1824, he authored his first political work of significance, entitled “Objections Concerning Law and the State,” which managed to catch the attention of the University of Ghent as they hired Thorbecke as professor of political science. Unfortunately, Thorbecke was forced to resign this post due to the Belgian Revolution in 1830 which separated the Belgian provinces from the United Kingdom of the Netherlands.

Initially, Thorbecke was known to be a loyal supporter of the conservative government of King Willem I, but later developed a more cynical view of politics and the autocratic system of government throughout much of the 1830s which saw the break-up of the country. In May 1844, Thorbecke was elected to the House of Representatives as the representative for South Holland, where he eventually became the leader of the liberal opposition. Just four years later, with much of Europe trembling with unrest from the Revolutions of 1848, King Willem II (1792–1849) successor of his father Willem I who had abdicated in 1840, agreed upon the formation of a committee whose task it would be to revise the constitution. Thorbecke was appointed as head of this committee on the 17 March 1848. The changes proposed to the Dutch constitution were mostly authored by Thorbecke while the other members of the committee did little but simply approve of his proposals. The drafted constitution was reluctantly approved and ratified by the States General on the 3rd November 1848.

Thorbecke would later serve as prime minister, forming three governments from 1849 to 1853, 1862 to 1866, and from 1871 to 1872 — while at the same time holding the portfolio of minister of the interior. He died at his home in The Hague on the 4th June 1872, at the age of 74 while holding office. Though for some, he had been an unpopular figure of discontent and derision, due to his reputation as a man who conceded little, Thorbecke is today considered a towering figure in Dutch history and parliamentary politics. 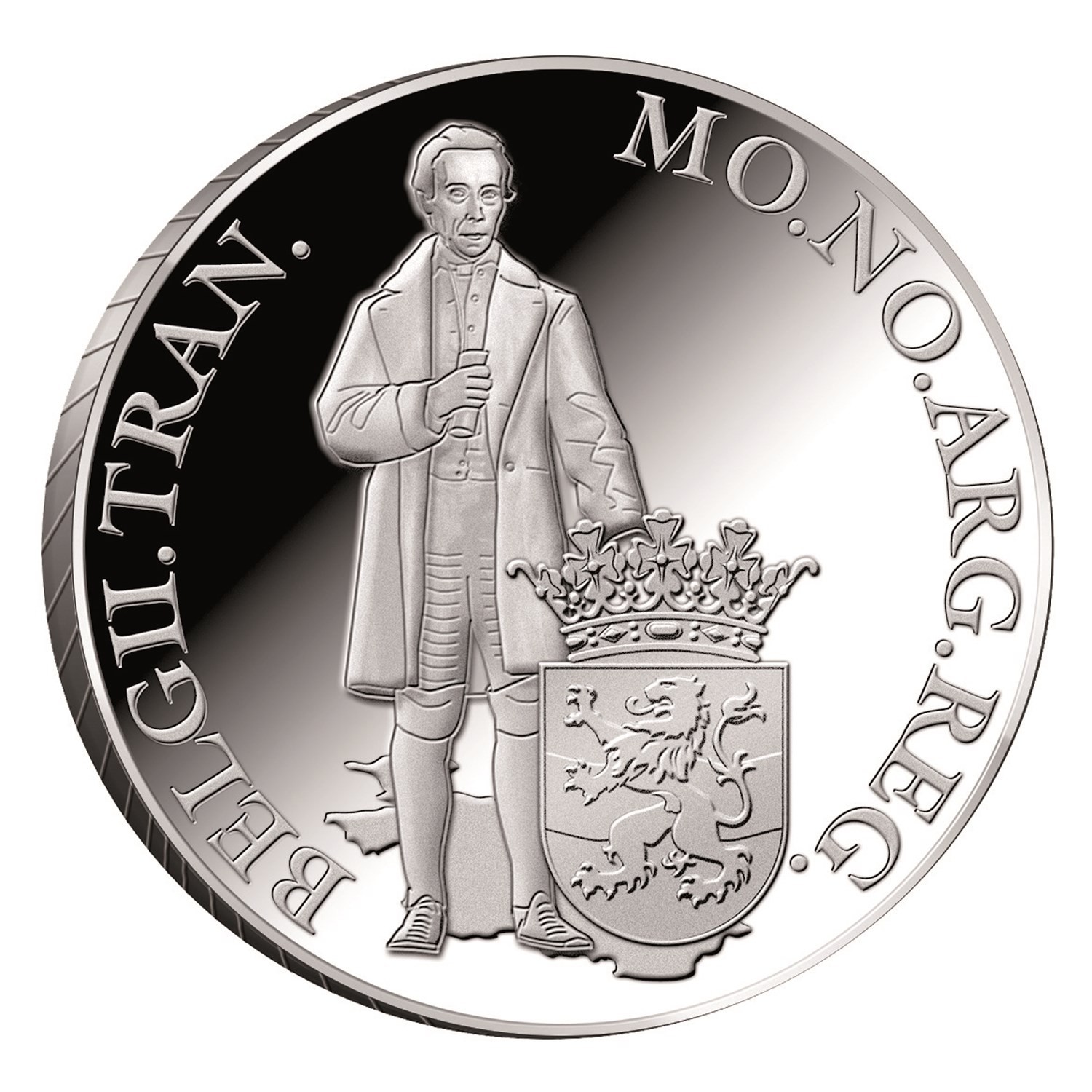 The coin includes a standing figure of Johan Rudolf Thorbecke, whose seat was in Zwolle in Overijssel. In a departure from the previous depictions for this series, Thorbecke is not featured in the armour of the Anonymous Knight but is instead in a suit of clothes. He is seen standing over an outline of the historical boundaries of the province of Overijssel while being accompanied by the shield of the province. The crowned crest consists of a gold shield with a blue banner along with a red lion rampant and facing left. The Latin inscription around the coin MO. NO. ARG. REG. BELGII. TRAN translates to “Silver money of the Belgian Federation, province of Overijssel.” 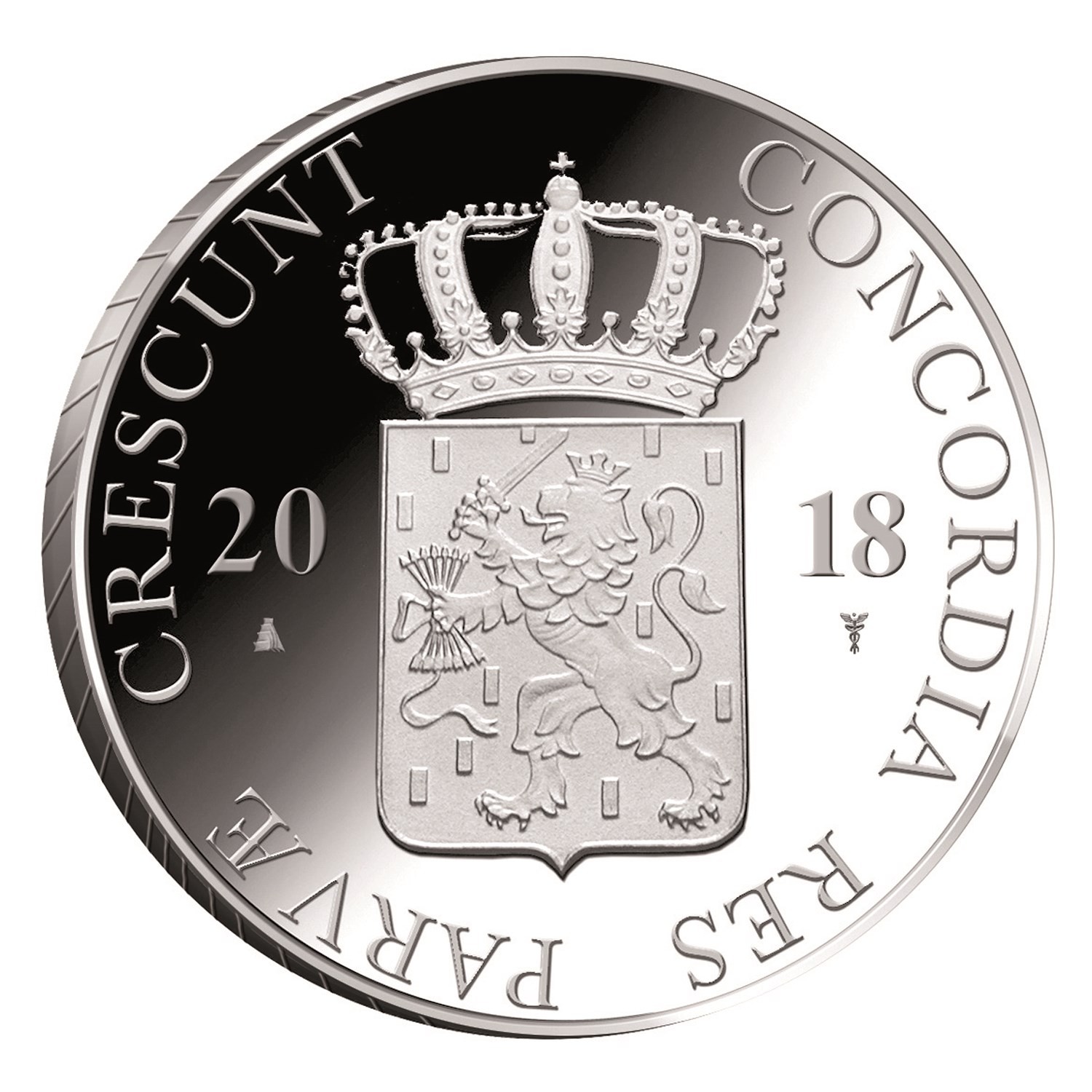 The reverse of the coin includes the modern crest of the Kingdom of the Netherlands, crowned, along with the year of issue seen as two digits on either side of the shield. The Latin text around the crest reads CONCORDIA RES PARAVE CRESCUNT, or, “In harmony small things grow.”

Available by the end of March 2018, the collector coins can now be ordered before their official issue date. The Dutch silver ducat continues to hold the status of legal tender in the Netherlands and has been in continuous production since the years of the Dutch Republic (1581-1795). The new examples continue to be struck in the standard .873 silver fineness commonly used for this type of trade coin. The overall design of this popular series will change after all 12 Dutch provinces have been represented. One more coin will be issued in 2018 and two coins in 2019. For additional information on this coin and others available from the Royal Dutch Mint, please visit their website.