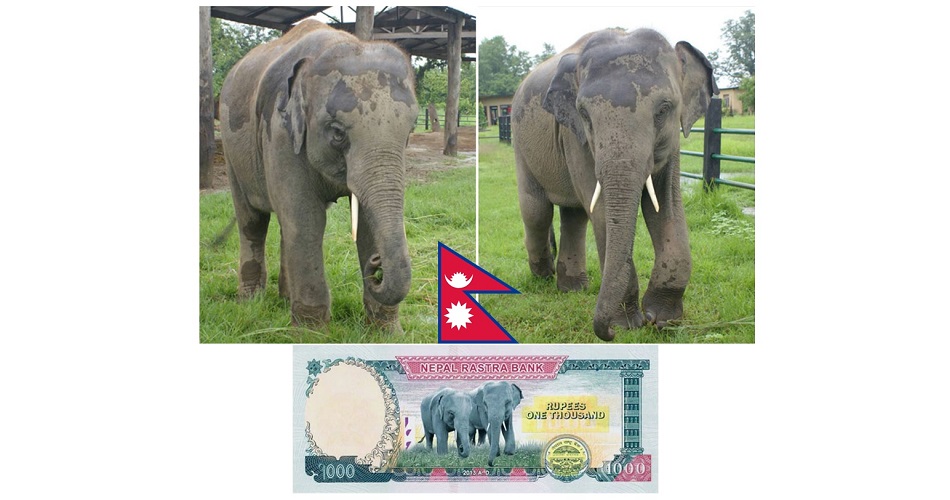 The Nepal Rastra Bank, the country’s central bank, has released newly printed 1,000-rupee banknotes (U.S. $8.40), their largest denomination in circulation, which includes updated security measures and a change on the back side. Following on from a programme to change the depictions of the wildlife shown on Nepalese banknotes, several animals were found not to be indigenous to the country. The Central Bank’s committee overseeing the project concluded the back sides should be amended to more accurately reflect the country’s own wildlife. 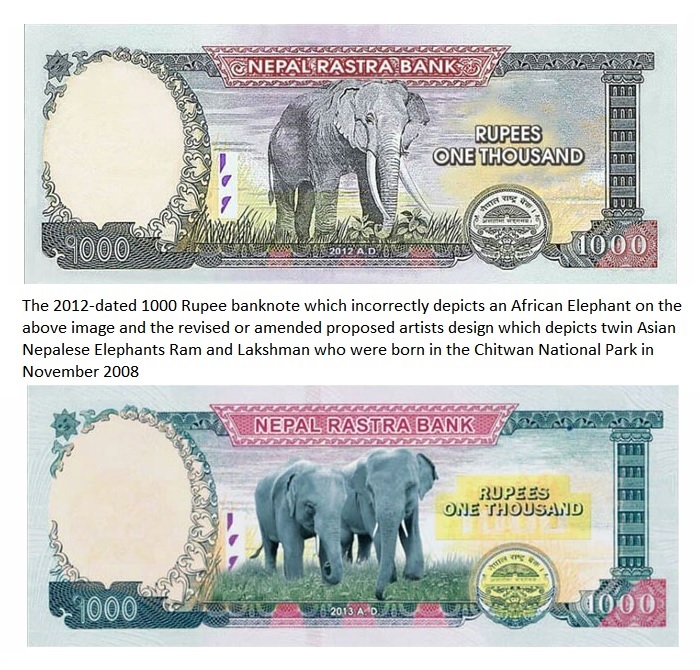 In the case of Nepal’s 1,000-rupee banknote, originally introduced into circulation in 1974, the note included a portrait of the country’s King Birendra Bir Bikram Shah, who ruled from 1972 until 2001. The back side included an image of an elephant. However, the depiction was identified to be that of an African elephant and questions were raised as to why there was an image of a foreign elephant used, especially when Nepal has many Asian elephants of its own. When additional changes came to Nepalese banknotes, it was not to amend the wildlife known to be inaccurate but to include a portrait of the country’s new King Gyanendra Bir Bikram Shah, who succeeded his assassinated brother in June 2001. After his deposition in 2008, the royal portrait was replaced on the face side of all circulating denominations with an image of Mount Everest, Earth’s highest mountain above sea level, located in the Mahalangur Himal sub-range of the Himalayas and run along the Nepalese-Chinese border. After Nepal’s transition from a monarchy to a republic, the Rastra Bank’s Note and Coin Design Committee agreed new designs should be implemented. It was at this time that the committee decided a depiction of Ram and Lakshman, twin Asian elephants born on the 7th November 2008, in Chitwan National Park, should replace the previous and incorrect image. However, it took the Central Bank a further eight years to implement the decision. In a 2012 meeting, the design committee conferred with Megh Bahadur Pandey, representative of the Department of National Parks and Wildlife Conservation, for the correct images to be included on the back side of the 1,000-rupee banknote. Pandey worked with historian Satya Mohan Joshi, who concurred with the decision to depict animals of Nepali origins and formed a separate committee under the now-current governor of the Central Bank to manage the photos. The image now depicted on the new 1,000-rupee notes were taken by a professional wildlife photographer, exclusively for use on these new banknotes. The same project also authorised the amended wildlife images on the country’s 500, 100, 50, and 20-rupee banknotes with either completely new images or amended ones from the previous issues. 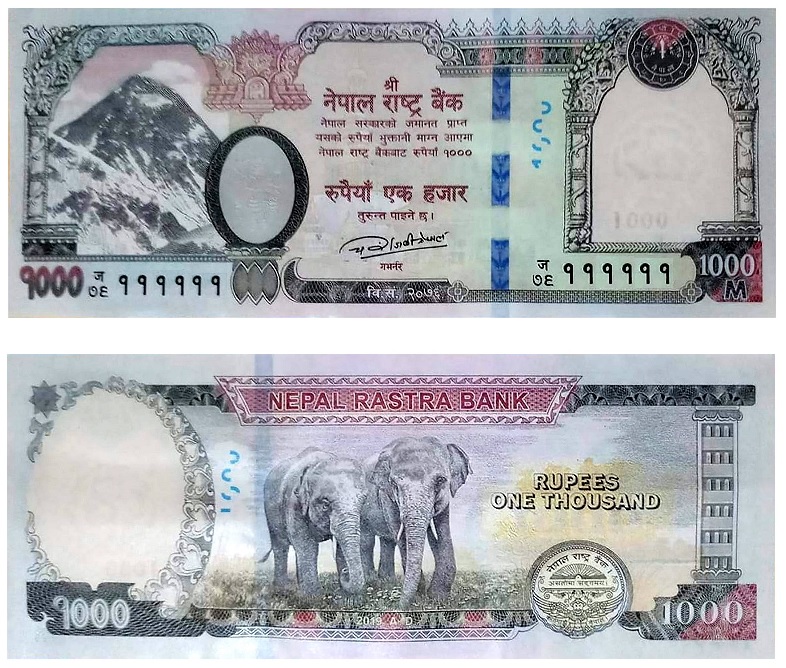 The new banknotes are produced by the China Banknote Printing and Minting Corporation, which is headquartered in Beijing, on behalf of the Nepal Rastra Bank. The specifications and colour of the notes remain unchanged from the previous notes. Still, they include updated security features such as a holographic security strip, as well as the inclusion of a tactile application to aid visually impaired persons to identify the notes. The Western letter M is positioned towards the lower right corner, the letter denoting the denomination in Roman numerals. The left side continues to depict Mount Everest, the highest peak in the world, with the right side showing a watermark image of a rhododendron, the national flower of Nepal. The year 2019 AD appears below the depiction of Ram and Lakshman and the text RUPEES ONE THOUSAND is seen to the right of the primary design. The 1,000-rupee denomination is also Nepal’s first machine-readable banknotes. The Central Bank has authorised a total of 310 million examples of new 1,000-rupee notes. For additional information about the Nepal Rastra Bank, please visit their website.