The United States Mint has started accepting orders for circulating quality 2013 Native American $1 Coins in an array of rolls, bags, and boxes. This represents the latest release of the program created to honor the contributions and accomplishments of Native Americans on annually rotating reverse designs.

The 2013 Native American Dollar commemorates the Delaware Treaty of 1778, the first written treaty between the United States and a Native American tribe. Under the mutual defense treaty, the United States was allowed passage through the Delaware Tribe’s land to attack the British at Detroit, Michigan. It also recognized the Delwares as a sovereign nation and provided the option of joining with other tribes in the Ohio region to form a state. Although this option was never exercised, it foreshadowed the later acknowledgment of tribes as partners in the federal system. 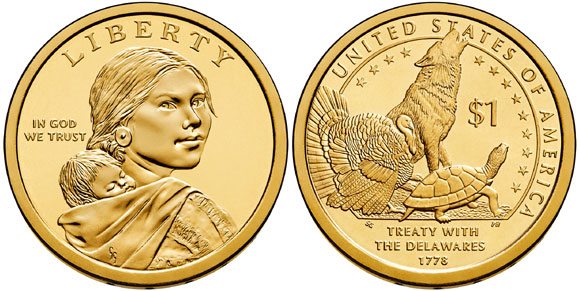 The reverse design of the coin depicts a turkey, wolf, and turtle, which was all symbols of the clans of the Delaware tribe. An arrangement of thirteen stars appears to represent the Colonies. Inscriptions read “United States of America”, “$1″, and “Treaty with the Delawares 1778″. The obverse contains a portrait of Sacagawea and child with inscriptions “Liberty” and “In God We Trust”. The reverse was designed by Susan Gamble and sculpted by Phebe Hemphill, while the obverse was designed by Glenna Goodacre.

Product options available from the United States Mint include circulating quality coins from the Denver or Philadelphia Mint in an array of sizes. There are 25-coin rolls priced at $32.95, 100-coin bags for $111.95, 250-coin boxes for $275.95, and 500-coin boxes for $550.95. The wrappers or tags indicate the mintage year, mint of origin, face value of the contents, and the US Mint logo.

A shipping and handling fee of $4.95 is applicable to each order, with an additional shipping charge of $7.95 per 500-coin box. Orders may be placed online at http://catalog.usmint.gov/