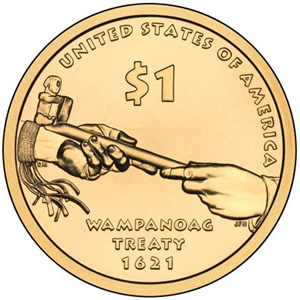 The 2011 Native American Dollar is the third release within the series celebrating the contributions and accomplishments of Native Americans. Each year has featured a different reverse design paired with the obverse portrait of Sacagawea and child used for the previous Sacagawea Dollar coin series. This year’s reverse design features the hands of the Supreme Sachem Ousamequin Massasoit and Governor John Carver exchanging the ceremonial peace pipe. This follows the initiation of the peace alliance between the Wampanoag tribe and European settlers at Plymouth Bay.

The US Mint offers 25-coin rolls of the new coins from either the Philadelphia or Denver Mint. The wrappers indicate the face value of the coins, the mint of origin, and the year of issue, along with the United States Mint’s logo. Each roll is priced at $39.95 plus applicable shipping and handling charges. The coins included in the rolls indicated to be circulation quality. 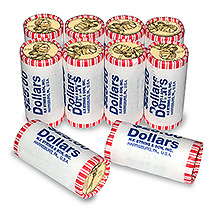 Separately, boxes containing 250 of the 2011 Native American Dollars are available through the Direct Ship Program. This program was created to provide an easier method for the public to obtain smaller quantities of the coins for the purpose of introducing them into circulation. The coins can be purchased at the face value of $250 with no additional charge for shipping and handling. By purchasing the coins, the customer agrees to comply with the intended purpose of the program. The mint or origin cannot be specified and certain ordering limits apply.

Also available through the Direct Ship Program are the 2010 Native American Dollars featuring the Hiawatha Belt design and the 2001 Sacagawea Dollars, representing the last year this series was minted for circulation. From 2002 to 2008, the series was only produced in quantities needed to fulfill numismatic demand.