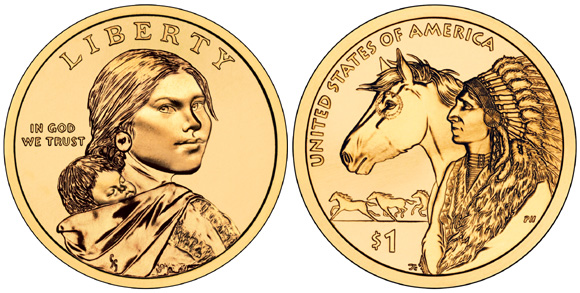 The 2012 Native American Dollar features a portrait of Sacagawea and child on the obverse, designed by Glenna Goodacre for the original Sacagawea Dollar series launched in 2000. The reverse design was created for the theme “Trade Routes in the 17th Century” and features a Native American and horse in profile with three horses running in the background to represent the historical spread of the horse. This was designed by Thomas Cleveland and sculpted by Phebe Hemphill.

Since 2009, the Native American Dollar Program has featured annually rotating reverse designs, celebrating the accomplishments and contributions of Native Americans. The first design in 2009 depicted the “Three Sisters” method of planting. This was followed by the Hiawatha Belt encircling five arrows (2010) and the hands of the Supreme Sachem Ousamequin Massasoit and Governor John Carver exchanging the ceremonial peace pipe (2011).

For the 2012 Native American Dollars, the United States Mint offers 25-coin rolls from either the Philadelphia or Denver Mints. The wrappers indicate the mintage year, mint of origin, face value of the contents, and the US Mint logo. Each roll is priced at $32.95. The 250-coin boxes contain ten rolls in the same wrappers and are priced at $275.95 each. The 500-coin boxes contain twenty rolls and are priced at $550.95 each.

A shipping and handling fee of $4.95 is applicable to each order, with an additional shipping charge of $7.95 per 500-coin box. Orders may be placed online at http://catalog.usmint.gov/