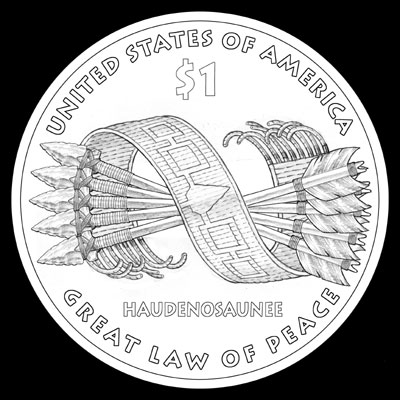 The new reverse design is based on the theme “Government – The Great Tree of Peace”. The design depicts the Hiawatha Belt with five arrows bound together. This belt is a visual record of the creation of the Haudenosaunee, or Iroquois Confederacy. The symbols on the belt and five arrows represent the five nations: Onondaga, Mohawk, Oneida, Cayuga, and Seneca. The reverse will carry the inscriptions “United States of America”, “$1”, “Haudenosaunee” and “Great Law of Peace”. The design is by Artistic Infusion Program Master Designer Thomas Cleveland.

The obverse of the coin will feature the portrait of Sacagawea and child designed by Glenna Goodacre. This design was used on the previous Sacagawea Dollar coin series. Obverse inscriptions include “Liberty” and “In God We Trust”. The motto “E Pluribus Unum”, date, and mint mark appear edge lettered on the rim of the coin.