The United States Mint will hold a launch ceremony for the 2011 Native American Dollar on January 12, 2011 at 10:30 AM ET. The ceremony will be held at the Plimoth Plantation Henry Hornblower II Visitor Center in Plymouth, Massachusetts.

The Native American $1 Coin Program was launched in 2009 to recognize the accomplishments and contributions of Native Americans. Along with Glenna Goodacre’s portrait of Sacagawea and child on the obverse, a different reverse design is used for each year of the series.

For 2009, contributions related to agriculture were represented with a depiction of the “Three Sisters” method of planting. In 2010, the design featured an image of the Hiawatha Belt surrounding five arrows bound together. This was a visual representation of the Haudenosaunee or Iroquois Confederacy. 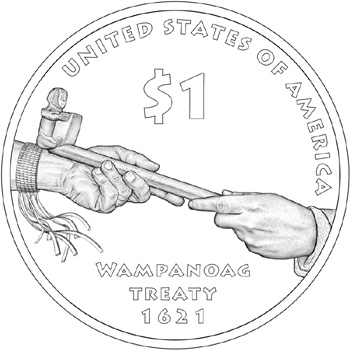 The 2011 Native American Dollar depicts the hands of Governor John Carver and Supreme Sachem Ousamequin Massasoit exchanging the ceremonial peace pipe. This followed the initiation of the first written peace alliance between the Wampanoag tribe and the English settlers at Plymouth. Inscriptions indicate “United States of America”, “$1”, and “Wampanoag Treaty 1621”. The reverse was designed by US Mint Artistic Infusion Master Designer Richard Masters and sculpted by US Mint Sculptor-Engraver Joseph Menna.

Following the launch ceremony, members of the public will be able to exchange currency for rolls of the new Native American Dollars. Attendees aged 18 years and younger will receive a free coin to commemorate the day.