The program includes proof and uncirculated versions of $5 gold coins, silver dollars, and clad half dollars issued to recognize and celebrate the National Baseball Hall of Fame as it marks its 75th anniversary. The coins share a common design featuring a depiction of a glove on the concave obverse and baseball on the convex reverse, representing two basic elements of the national pastime. These coins represent the first “curved coins” ever produced by the United States Mint. 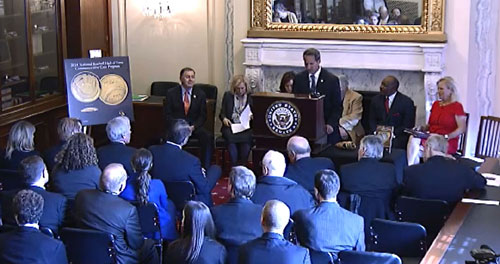 “Today’s release of the 2014 National Baseball Hall of Fame Commemorative Coin is a significant milestone in celebrating the history and legacy of our country’s favorite pastime. The spirit of baseball is captured in this coin,” said Jeff Idelson, President of the National Baseball Hall of Fame. “We are appreciative to the House, the Senate and the President for signing the commemorative coin into law, and are excited to introduce the gold, silver and clad coins to a baseball-adoring public and an excited numismatic community.”

U.S. Senator Kirsten Gillibrand and U.S. Representative Richard Hanna who co-sponsored the authorizing legislation were also present at the ceremony. 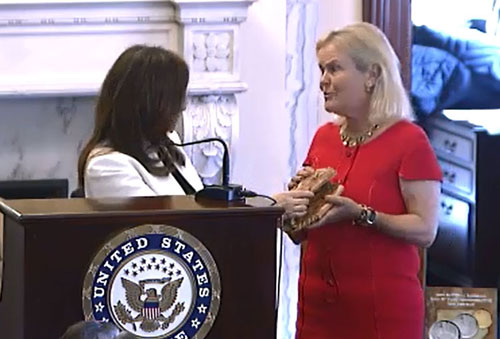 The ceremony concluded with Treasurer Rosie Rios presenting a well-worn and well-loved glove to Baseball Hall of Fame Chairman Jane Forbes Clark. This glove had served as the inspiration for Cassie MacFarland of San Luis Obispo, California, who created the contest-winning obverse design of the coins.

The United States Mint started accepting orders for the 2014 National Baseball Hall of Fame Commemorative Coins at 12:00 Noon ET. In anticipation of extremely strong demand for the coins, household ordering limits have been imposed and an online “waiting room” is being used to handle the influx of incoming web traffic. 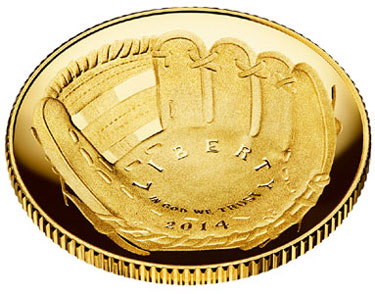 The $5 gold coins of the program are struck in 90% gold and 10% alloy with a diameter of 0.85 inches and weight of 8.359 grams. The maximum mintage is 50,000 pieces, with the ratio of proof to uncirculated coins to be determined based on customer demand. The household ordering limit is 50 of each version.

For the start of sales, the gold coins will be priced at $419.75 for the uncirculated version and $424.75 for the proof version. Prices may be subject to potential weekly change based on the market price of gold. 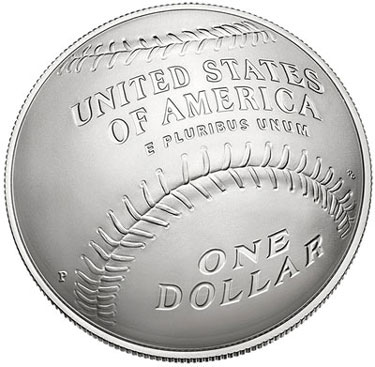 The silver dollars are struck in 90% silver and 10% copper with a diameter of 1.500 inches and weight of 26.73 grams. Across proof and uncirculated versions, the coins are subject to a maximum mintage of 400,000 pieces.

Initial pricing for the coins is $47.95 for the uncirculated version and $52.95 for the proof version. The household ordering limit is 100 coins per version. 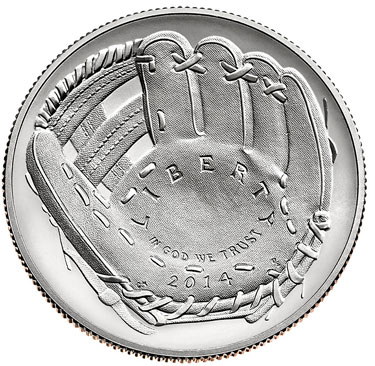 The clad half dollars are struck in a composition of 91.67% copper and 8.33% nickel. The coins have a diameter of 30.61 mm and weight of 11.34 grams. A maximum mintage of 750,000 pieces is established across proof and uncirculated versions.

Introductory pricing levels for all coins will remain in effect until April 28, 2014 at 5:00 PM ET. Ordering limits will be evaluated on a regular basis and potentially removed or adjusted.

The prices for the commemorative coins include a surcharge of $35 per gold coin, $10 per silver dollar, and $5 per half dollar, which is distributable to the National Baseball Hall of Fame to help finance its operations.