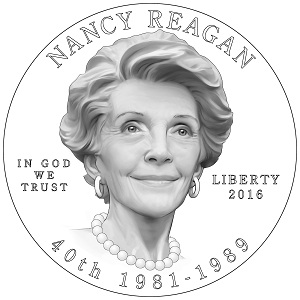 The U.S. Mint has shared release dates for six of its upcoming products, all of which are scheduled to appear during the first two weeks of July. Perhaps the biggest revelation is that the 2016 Nancy Reagan First Spouse Gold and Uncirculated Coins will debut promptly on July 1, one day after the release of the 2016 American Eagle Platinum Proof Coin.

Other products tied to the Reagan Presidential $1 coin will be released as well, including rolls, bags, and boxes of the Reagan dollar and the Reagan Coin and First Spouse Medal set. Then the next week will follow up on the June 6 launch of Harpers Ferry America the Beautiful quarter products by opening sales for two more Harpers Ferry items, including that design’s five-ounce silver Uncirculated coin.

The Mint’s new release dates for the month of July are listed below.

The Mint’s product schedule is always a work in progress; as the second half of July has been left open for now, it’s possible other releases may be slated for later in the month. For more information, please visit the Web site of the U.S. Mint.