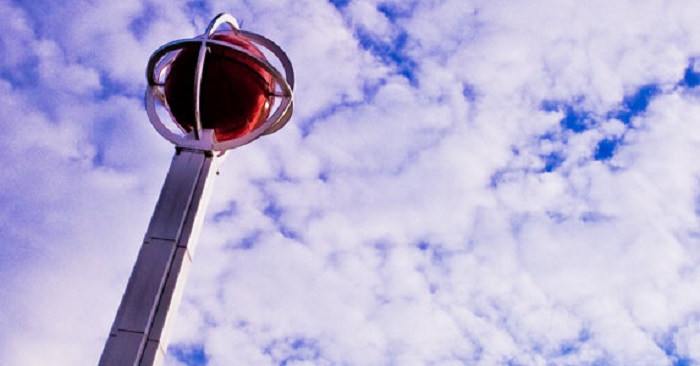 Next year coin collectors will have the opportunity to add a third dome-shaped U.S. commemorative coin to their collections following the 2014 Baseball Hall of Fame and 2019 Apollo 11 programs. The familiar trio of a clad half dollar, silver dollar, and gold $5 coin will be issued to mark the 60th anniversary of the founding in 1959 of the Naismith Basketball Hall of Fame in Springfield, Massachusetts.

James Naismith was a Canadian-American physician who invented basketball and had a strong commitment to the values of the game (which include respect, teamwork, perseverance, honesty, etc.).

Don Senecal, who has served as the Hall of Fame’s Chief Financial Officer and Vice President for Finance since 1998, said the organization is very excited about the forthcoming U.S. Mint coin program, which he anticipates will be popular with basketball fans. Like the HOF’s president, John Doleva, he previously worked for Spaulding Sporting Goods. 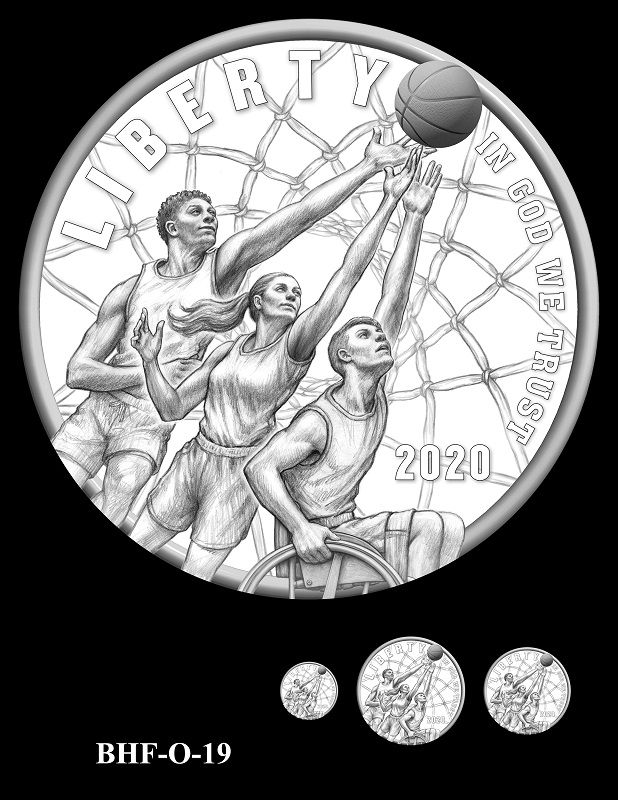 Mr. Senecal said the proposed designs, which will be shared by each of the coins, are “very artistic” and that during meetings of the coin design review committees this summer he indicated a preference for the concave obverse design of three players (one male, one female, and one in a wheelchair) reaching for a basketball. 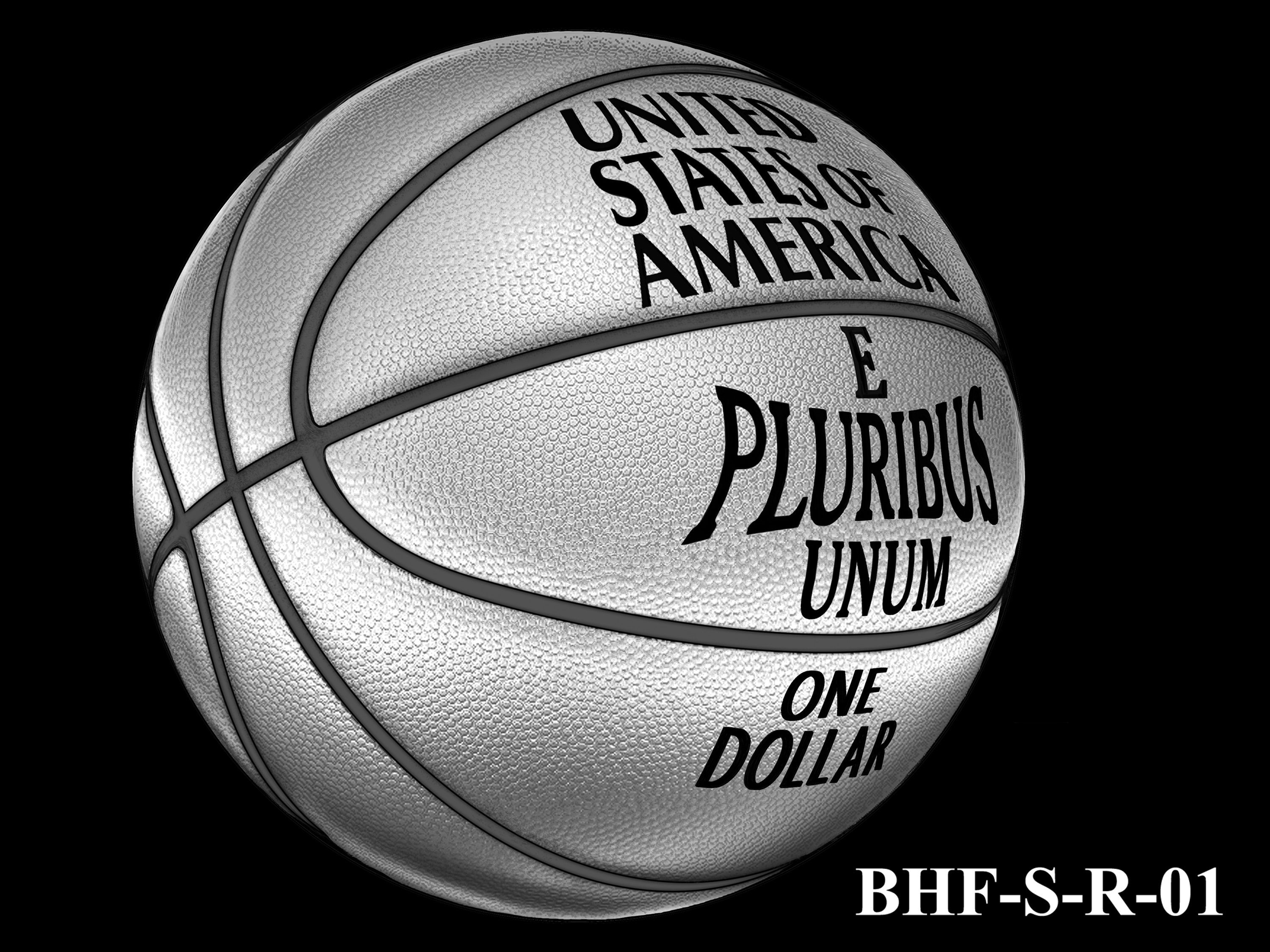 This design was also the recommendation of both the Citizens Coinage Advisory Committee and the Commission on Fine Arts. He likes the way the design represents “the diversity of the game — one that anyone can play” — and the way the design emphasizes the inclusiveness of basketball in a way that a design showing only male players would not. As for the two convex reverse designs being considered, he said he likes the one with the basketball and net, also favored by the CFA.  The CCAC prefers one that shows the side of a basketball. 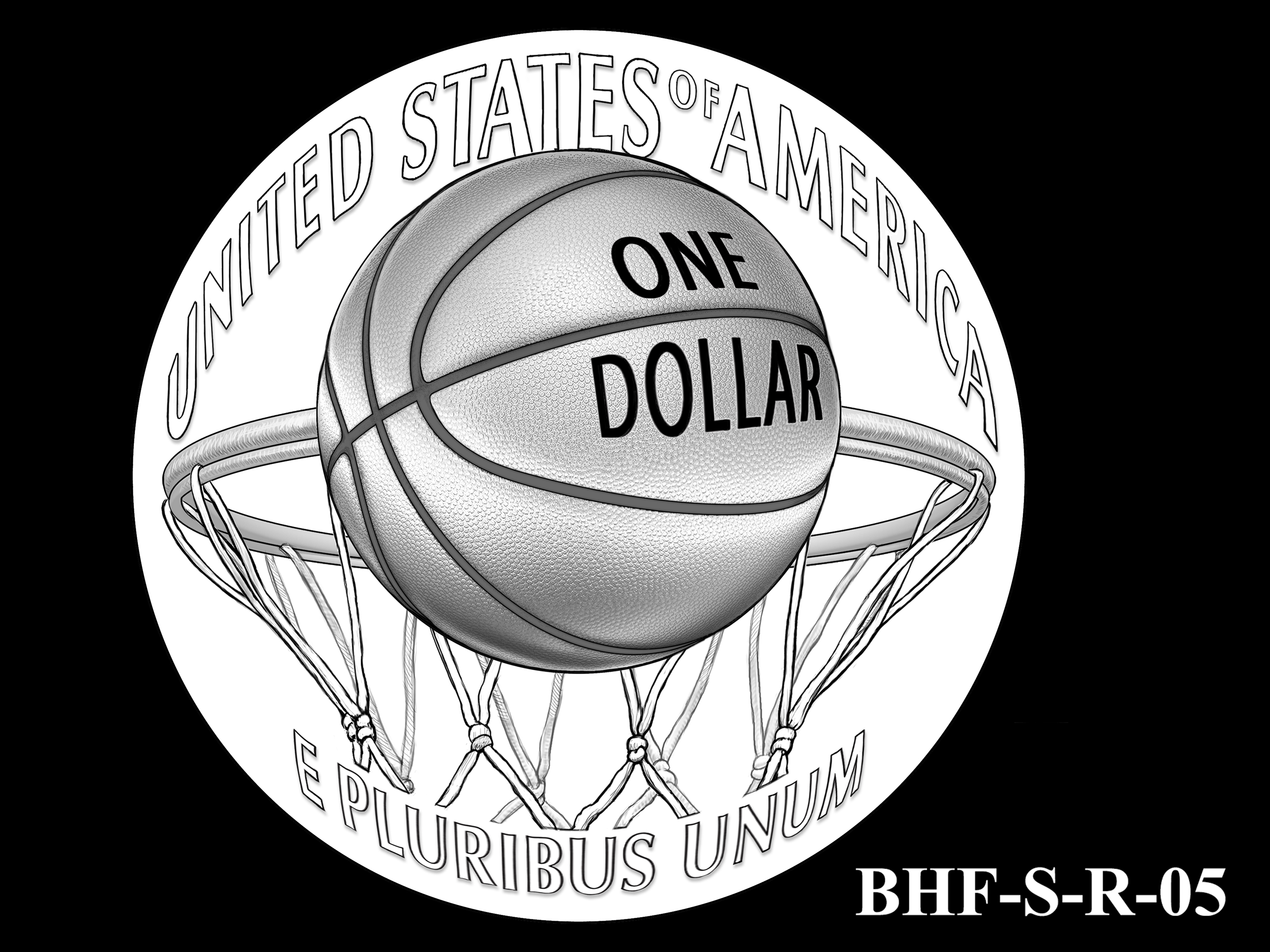 Regarding the possible use of color on the silver and clad pieces, which the Mint is considering, Don noted that color may only be used for a certain amount of the total number of those coins. He said the Hall of Fame strongly supports the use of color. A colored domed coin would be a first of its kind for the U.S. Mint, which would only add to the appeal and collectability of the coin in his view. 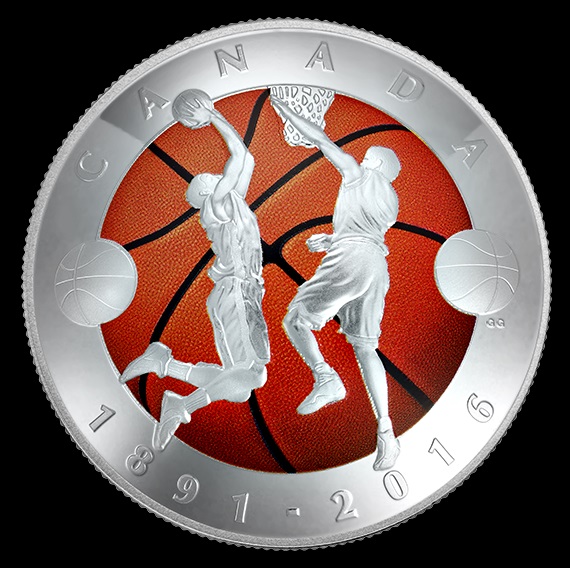 In 2016 the Royal Canadian Mint issued a convex, colored one-ounce silver basketball coin for the 125th anniversary of the invention of basketball by Dr. Naismith.

The Hall of Fame is preparing an aggressive marketing campaign for the coins that seeks to “marry sports marketing with coin marketing” and to create synergy between basketball fans and coin collectors. It will last all year and be timed as much as possible to dovetail with the 2020 basketball season. It will also involve the participation of sports card makers, the NBA, and others as well as the U.S. Mint. An important aspect of the plan is the use of social media, where the Hall of Fame will provide teasers about the coins. Fans of the game have already indicated interest in the coins online.

The final design selections, which will be made by Treasury Secretary Steven Mnuchin, will for the first time be unveiled live on television in the near future, something which has never happened before. There will also be a press conference with U.S. Mint Director David J. Ryder about the coin program.

Another way the Hall of Fame plans to promote the coins is with a special phone app that will provide a 3D image of the coin. Don said the HOF will be working with colleges and high schools and the NBA and that there will be “a steady diet” of such promotions as we get into the start of the basketball season in October. In addition to social media and broadcast television, they also plan to run information about the coins in sports magazines.

There will be an NBA All-Star game on February 16, playoffs that begin on April 18 and NBA finals in June. The year will end with a game in London. The HOF expects to promote the coins, especially the clad halves, at those events. For example, the coin might be included with season tickets or included in secondary market sets paired with images and autographs of famous players like Michael Jordan.

Another issue is the international appeal of the sport and the fact that the coins will be of interest to coin collectors and basketball fans in other countries. Don noted that in China 300 million people play the game, which is 10 times the 30-40 million people who play the game in the U.S. He said that the U.S. Mint plans to explore similarly partnering with some foreign mints to what was done this year for the 2019 Apollo coins and that is planned for future programs.

As for the endowment that will be established from surcharges on the sale of each coin ($5 on the clad, $10 on the silver, and $35 on the gold) — once all costs to the U.S. Mint are first recouped — Don said that education, especially of high school children, would be the key focus, which includes a core curriculum focused on issues such as bullying and others Dr. Naismith believed are important. Above all, this means teaching the values of the game.

The HOF plans to sponsor 100 scholarships for high school children (50 for boys and 50 for girls), does a lot of work on historic preservation of important basketball artifacts and works on ways to expose more people to the game and the values it represents.

Don also pointed out that the Naismith HOF is the only sports hall of fame in the world that promotes all aspects of the game and that represents everyone involved in the popular sport of basketball that has global appeal.

In the past, recipient organizations for U.S. Mint commemorative coins sometimes did not market the coins aggressively, which likely contributed to lower sales of those issues. The emerging marketing and promotion plan of the Naismith HOF for the 2020 basketball coins should go a long way towards making a sellout not just the silver and gold coins — which Don thinks is very likely — but even of the clad halves a real possibility. That would be a very positive development not just for the HOF but also for the U.S. Mint and numismatics.