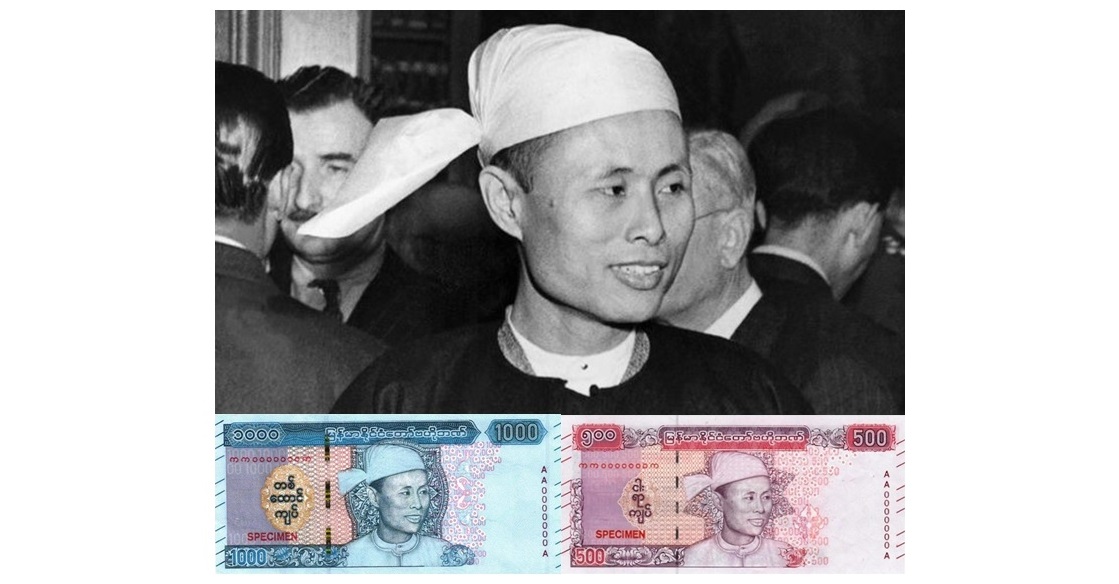 The Central Bank of Myanmar has announced (18th June) the issue of new 500-kyat banknotes (USD 0.36) carrying the image of national hero General Aung San would be released next month. The announcement follows on from a Central Bank bulletin earlier this week that confirmed the image of the leader of Myanmar’s independence would transition onto all other current denominations in use from 10 to 10,000-kyat. Aung San (1915–1947), who is affectionately known by the single reference, Bogyoke (meaning “Major General”), is remembered as the driving force behind the movement which saw the Union of Burma — Myanmar’s former name achieved independence from Great Britain in 1948. Banknotes, which included the image of Aung San, were first printed in 1958 — 10 years after he was assassinated, along with eight colleagues. Successive banknotes carrying Aung San’s portrait were gradually removed from circulation amid the rising popularity of the pro-democracy movement following in 1988. Beginning in the 1990s, the government directed the Central Bank to print banknotes which included an image of the stylised king lion. In 2009, the image of an elephant was added to the 5,000-kyat banknote, and in 2012, a crest design was included on 10,000-kyat banknotes. In November 2017, lawmakers proposed to bring back the image of Aung San onto banknotes. As such, the Central Bank of Myanmar reintroduced the image of General Aung San on 1,000-kyat banknotes in January after a three-decade absence. 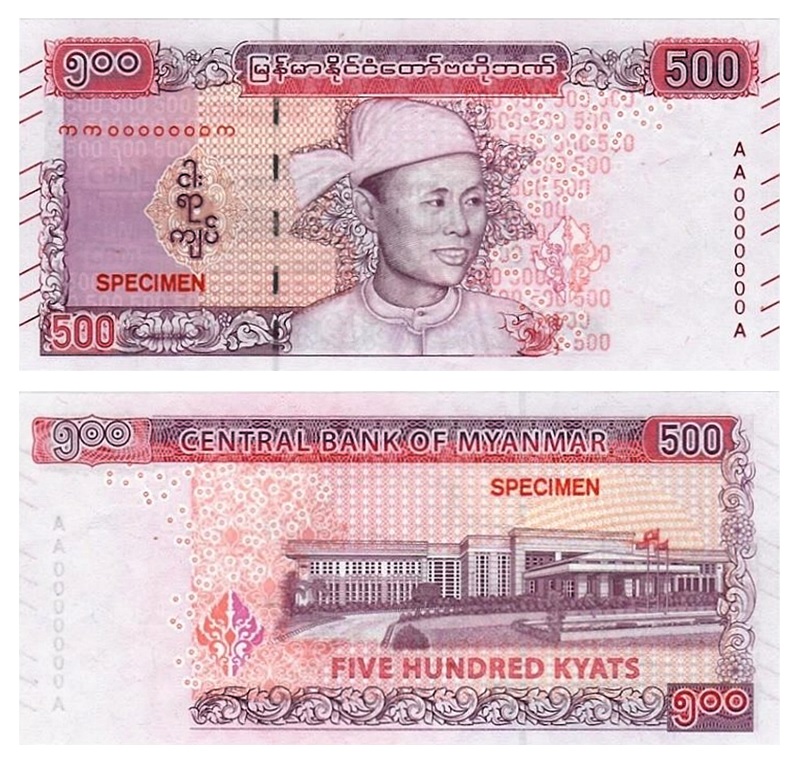 The banknotes, which are produced by the Central Bank’s security and printing works complex, are closely designed to that of the 1,000 kyat-banknotes that depict the Bogyoke wearing a gaung baung, a traditional Burmese kerchief part of the traditional costume or attire. The image recreated on the new banknote is derived from an actual photograph taken the year of his death. The dimensions of new banknote measure 70 by 150 millimetres and is predominantly red-brown in colour. The right corner carries the 500-kyat denomination in Myanmar numbers with western numerals seen on the remaining corners. The serial number is printed horizontally in Myanmar numbers, and vertically in western numerals placed to the right edge and which is next to the watermark of the Bogyoke. A holographic effect is incorporated into the security thread which appears segmented. Placed on the left and right edges are a series of raised-print lines which are applied as a measure to identify the banknote for visually impaired persons. The back side depicts the building of the Central Bank of Myanmar with the English text CENTRAL BANK OF MYANMAR above the bank’s image and FIVE HUNDRED KYATS shown below.

The Central Bank’s announcement stated the banknotes would be officially released on Martyrs’ Day — the national holiday observed on the 19th July to commemorate General Aung San and seven other leaders of the pre-independence interim government, along with one bodyguard. All of them were assassinated on that day in 1947. The current 500-kyat banknotes introduced initially in 2004 will remain legal tender until further notice. For additional information about Myanmar banknotes and coins currently in circulation, please visit the website of the Central Bank of Myanmar.