During a recent vacation in Philadelphia, I decided to ride downtown to to the Philadelphia Mint in order to take the self-guided tour of the facility.  They do not allow photography in the building, so I could not take  pictures.

Once inside, there were displays of thousands of Lincoln cents under a glass tabletop and Martin Van Buren Presidential dollar coins in a large glass cylinder.  The lobby also housed a display of all the commemorative coins designed by the Mint since 1892.  On the wall, Tiffany mosaics displayed how coins were manufactured in ancient times.  There was also a large gift shop in the lobby, which was also situated the end of the tour, where the usual gift shop items of pens, t-shirts and the like could be purchased, as well as the US Mint’s standard offerings of coin products. 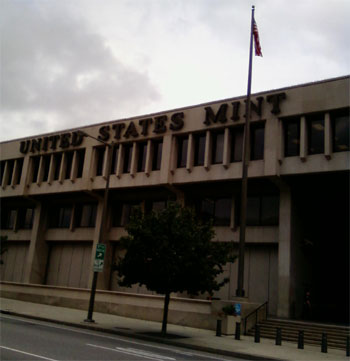 The tour was self-guided, passing through a long hallway with displays of all of the mint locations, both past and present, as well as a compilation of medals that have been produced.  The middle of the tour takes you through a double-sided observation deck, overlooking over the coin production floor itself.

At that particular moment, they were producing Lincoln cents. There were several long conveyor belts with trays filled with blank cents, each tray about the size of a loaf of bread.  The distance from the deck to the belt was too far to tell exactly where in the process the blanks were, but it was definitely prior to being stamped by the coin presses.  Several lines of coin presses were visible, each labeled for the particular denomination.

While I was watching the belts and admiring the level of automation employed by the Mint (there were only a handful of visible employees within an area about the size of a football field), I had conversations with other tourists.  The topics ranged from the potential end of the cent, following the actual end of the half cent coin, to the failure of the Presidential dollar coins to circulate, and the current National Park Quarters series.

There was also a separate area for making medals.  Unlike the circulating coins, production was much less automated.  Where the main area felt like an automobile plant, the medals area was more like a metal shop: individuals putting a lot of care and attention to making things look perfect. 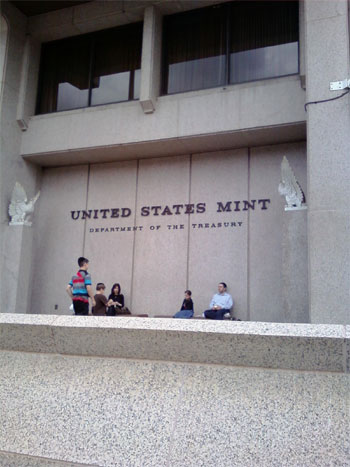 The path from the production floor back to the gift shop was decorated with 2-foot sized images of the 50 States Quarters reverse designs.  It was nice to see those images on such a large scale: it reminded me of the three-inch silver discs that will feature the same images as the current National Park Quarters series.

In the gift shop, I looked around a lot, but did not purchase anything, having already purchased this year’s mint and proof sets at the Mint’s headquarters in Washington, D.C.  I did, however, use their bill changer machines to get four Yosemite Quarters and five James Buchanan Presidential Dollars.  All in all, I enjoyed the tour and I would recommend it to anyone in the Philadelphia area.