Many auctioneers and some dealers do not recognize obvious varieties of Morgan dollars, even though these coins command a premium–meaning you can cherrypick them and build a nifty collection at discount prices.

We’re not talking about the gazillion VAM varieties. (“VAM” is an acronym for the authors of The Comprehensive Catalogue and Encyclopedia of U.S. Morgan and Peace Silver Dollars.) Many collectors find VAMs intimidating because there are so many, with varieties subtle or difficult to differentiate from others in a complex numbering system.

I like looking for VAMs, as explained in a previous Coingrader Capsule, because it sharpens my eyes for obvious varieties.

You can learn more about VAMs by visiting vamworld.com.

Today we’re focusing on these obvious varieties that major grading companies recognize, often without special fees, and that most hobbyists can find with a little searching online or at coin shops or shows: 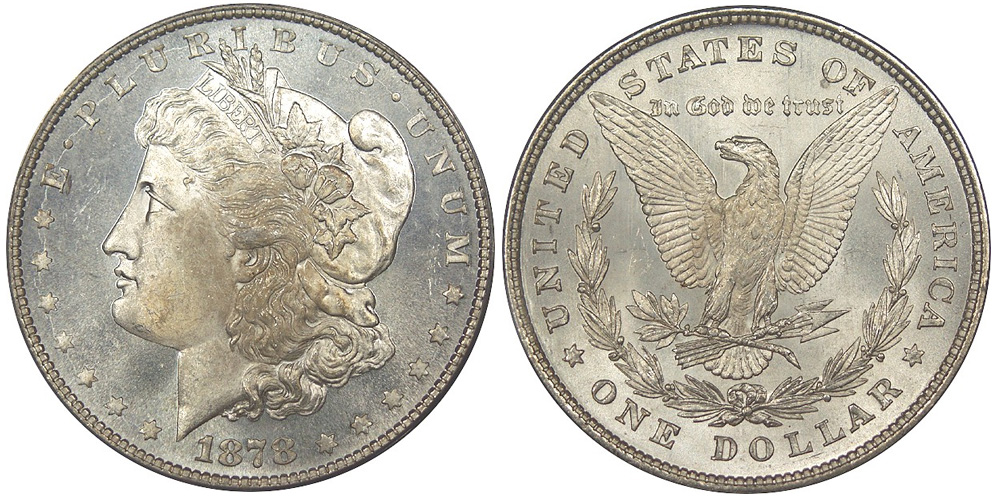 2. 1878 7/8TF strong. The “7/8TF” stands for seven over eight tailfeathers, although usually the strong variety has about 5 obvious tips of ones protruding from below the main feathers. Mintage of 7/8 varieties is about 544,000, making this one of the rarer Morgans. An MS63 sample can cost close to $350.

3. 1878 7/8TF weak. As the name suggests, you’ll find only one or a few less obvious tips of feathers protruding from below the main feathers. Nonetheless, these are scarce, command somewhat higher prices than the 7TF variety, and are useful in contrasting this from its “strong” cousin. One at MS63 can cost about $160.

4. 1878 7TF reverse of 79. Common 1878 7TF Morgans have a flat eagle’s breast on the reverse with a straight top arrow feather on the clutch of arrows in the eagle’s talons. (Sometimes the word “parallel” is used for “straight.”) The rarer variety has the redesign of the 1879 reverse featuring an eagle with a rounded breast and a slanted top arrow feather. An example of the latter at MS63 can run about $175.

7. 1890 CC Tailbar. This is a real obvious variety–a bar extending with a slight slant from the first tailfeather and bottom arrow feather down to the wreath. You can buy a worn 1890-CC at VG12 for about $100; a tailbar at the same grade costs about double that.