One of the largest single-focused coin series ever was the 1972 Munich Olympics Silver Coins issued by Germany. The series was produced to celebrate the 20th Olympiad held in Munich, Germany during 1972. Six different coin themes were produced in silver proof and silver uncirculated quality by four of the five German Mints.

Schleife – Honoring the municipality of Schleife in northeast Saxony. The word “Schleife” literally means “knot” and a stylized knot of cloth is featured on the Reverse of the coin, with the common obverse design of the Eagle styled after it.

Athletes – The athletes coin design features two kneeling athletes. The male figure is holding a ball or shot-put on his shoulder, while the female beside him is carrying a baton used in relay racing. Again, the obverse, with denomination and country of issue, shows the Federal Republic of Germany Eagle emblem stylized to complement the reverse design.

Stadium – Paying tribute to the main Olympic Stadium located in Munich’s north, as part of Olympiapark Munchen, the reverse design features an aerial view of the outlay of the Olympic stadium grounds, with the main arena off to the left. The obverse Eagle motif is quite a departure from previous designs in the Olympic series.

In Munchen – The “In Munchen” coin was released after a backlash created after the initial “In Deutschmark” silver coin was first issued. The complaints came from East Germany (DDR, GDR, German Democratic Republic) and as a result this new release was offered featuring the more specific “In Munchen” inscription together with the German Olympic logo. 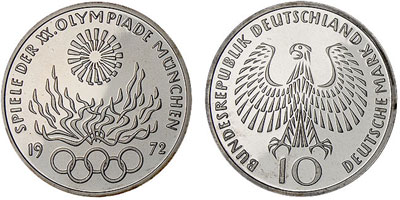 Flame – The Olympic flame is an important part of the Olympic Games ceremony and it symbolizes the theft of fire from the Greek god Zeus by Prometheus. The tradition of having the flame burn for the duration of the games started in Ancient Greece but was discarded until the 1928 games in Amsterdam. It has been used in every games since. The reverse design of this final coin in the 1972 Olympic series features a stylized version of the Olympic flame, with the Olympic rings logo beneath and the German Olympic spiral logo above.