The United States Mint has announced details of a release ceremony for the upcoming Mount Hood National Forest Quarter. This coin will mark the fifth release of the ongoing America the Beautiful Quarters Program, which features National Parks and sites from the 50 states, 5 U.S. territories, and the District of Columbia in the order federally designated. 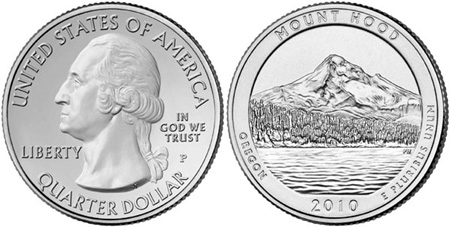 The Mount Hood National Forest Quarter features features a depiction of Mount Hood with Mirror Lake in the foreground, as designed by Phebe Hemphill. The reverse inscriptions include “Mount Hood”, “Oregon”, “2010”, and “E Pluribus Unum”. The obverse of the coin features a portrait of George Washington with original details restored from the 1932 Washington Quarter designed by John Flanagan. Obverse inscriptions include “United States of America”, “Liberty”, “In God We Trust”, and “Quarter Dollar”.

The ceremony will be held on November 17, 2010 at 10:30 AM PT. The location will be the World Forestry Center located at 4033 SW Canyon Road in Portland, Oregon. For those unable to attend, a live webcast will be available at http://americathebeautifulquarters.gov.

One of the highlights of the ceremony will be a coin exchange where attendees will be able to exchange currency for rolls of Mount Hood Quarters at face value. Children aged 18 years and younger will also receive a free quarter to commemorate the event. The new quarters commemorating National Parks and sites have been somewhat difficult to find through the regular channels of circulation, making coin exchanges one of the few dependable sources for obtaining the quarters at face value.

A coin forum will be hosted by the United States Mint on the evening prior to the launch ceremony. The forum will be held at Cheatham Hall of the World Forestry Center on November 16 from 5:30 to 6:30 PM PT.