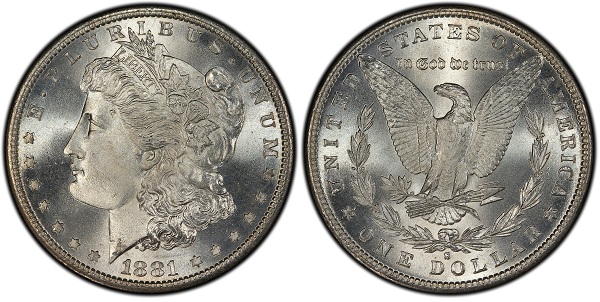 I was talking with Dwight Manley, a highly accomplished professional numismatist and businessman, who years ago, at the age of 14, was one of my students at the “All About Coins” class in Colorado Springs. The occasion was the Summer Seminar held by the American Numismatic Association, and about 20 people had signed up for my course. Dwight, barely a teenager, loved coins and, in the meantime, was busy with his schooling. Later, he did some serious thinking.

According to his biography, later printed in various places in connection with his coin activities (including supervising the sale of the SS Central America treasure), he credits me and the long-ago class for his decision to go into the rare coin business. The rest is history, and chapters in his life are still being written.

As we talked, I mentioned I was putting the finishing touches on a book about Morgan silver dollars for Whitman Publishing.

“Morgan dollars! I love them!” Dwight said. “No other coin can conjure visions of the Wild West, the shootout at the OK Corral, and other dramatic moments of history.”

Well, I have no way of knowing whether, back in 1881, Wyatt Earp was carrying an 1881-S dollar in his pocket when he stopped by at the OK Corral in Tombstone, in Arizona Territory, but there is always the possibility. We do know that if Pawnee Bill, “Buffalo Bill” Cody, Billy the Kid, or Annie Oakley spent a dollar in the Rockies in the late 19th century, it was a dollar made of silver. Of such romantic (at least in hindsight and popular history) stuff, Americans cannot get their fill. This was the period of the Wild West, empire building, the Deadwood Stage, William Jennings Bryan’s “Cross of Gold” speech, Scott Joplin down at the Maple Leaf Club in Sedalia, the French-chateau-style Cliff House overlooking the Pacific, society promenades in Saratoga Springs, the Pullman Palace Car, the five-cent cigar, and the silver dollar. All are everlastingly combined. A Morgan dollar is history in minted form, ready to come to life in the hands of an appreciative collector.

In time many Morgan silver dollars were spent and became worn out, including in such areas as Tombstone, where silver dollars were loved and paper dollars ignored. Similarly, neat little piles of dollars were seen at gaming tables in Rhyolite, Tincup, Silver Reef, Gillette, Bodie, Tonopah, and other places, some now ghost towns, others forgotten. In mercantile houses, banks, bordellos, and bistros in cities such as Helena, Cheyenne, San Francisco, and Denver, cashiers handled dollars in everyday transactions, never—or scarcely ever—pausing to see if below the eagle’s tail on a particular coin there might be a tiny letter S or O, or the twin letters CC.

Minted from 1878 to 1904, and again in 1921, for no real reason other than a political boondoggle to provide a market for Western mining and related interests (read: votes from citizens of the region), these pieces were anything but romantic at the time to the Treasury Department. Made in staggering, indeed frightening, quantities, they became a first-class nuisance. Vaults at the several mints were stuffed to their ceilings, and even a vast area of the Philadelphia Post Office was commandeered for storage, not to overlook a separate temple-like building set up in the Mint courtyard to store even more silver dollars, while in Washington the Treasury Building vaults had still more. Of course, what was their problem became our pleasure years later!

I still remember the times in the 1950s when banks in the Wyoming Valley, as the district around Forty Fort, Pennsylvania (my hometown), was known, would let me bring $1,000 in cash, from my inventory account, and give me a bag of 1,000 unsorted silver dollars. Such canvas bags were grimy, gray, stained, and always showed the marks of years of storage and handling.

Seeking to build my own set of Morgan dollars from 1878 through 1921 and Peace dollars from 1921 through 1935, and to acquire others for resale, I examined many thousands of coins. I never did find some of the CC coins (I think 1885-CC was considered to be the rarest back then), but most of the others came to hand, except, of course, a Philadelphia Mint 1895. 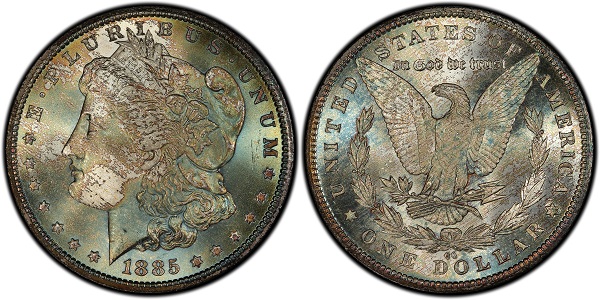 Typically, many of the Philadelphia Mint coins in a bag were Uncirculated, although rather dull and lifeless, and in sufficient quantities that they were annoying. In time I could identify certain dates and mintmarks of coins by simply looking at the obverse, and not checking for the mintmark, as Philadelphia, San Francisco, Carson City, and New Orleans coins for some dates had distinguishing “facial features.” I never did see an Uncirculated CC coin, but early in my dealership bought from another dealer a bag of 1878-CCs and, on another occasion, a bag of 1885-CCs.

Before long I had a little business going with silver dollars. Way out in California, dealer Abe Kosoff (whose credentials included being the founder of the Professional Numismatists Guild) had one or perhaps several clients who liked to hoard bags of Uncirculated silver dollars. At that time, around 1955 and 1956, upon request local banks would order bags of “new” dollars from their regional Federal Reserve Banks. On the West Coast, Abe was able to find endless numbers of S-Mint dollars in bags, but none of Philadelphia (as to bags of CC and O coins, no one ever had any of those!). I was the logical East Coast connection for him, and his first check to me was for $16,000, for 15,000 silver dollars (15 bags) plus a $1,000 profit for me. Then we settled into a routine with a slightly higher margin, 10%. He would send me checks for face value plus 10%, and I would order the bags and ship them to him. This I did, and all parties were happy. Every time he bought a bag I made $100, which added up. This, to me, was a fortune!

All of this was before the great Treasury release of the 1960s, which plays the lead role in all modern accounts of Morgan silver dollars. In the meantime I eagerly sought old auction catalogs, reference books, and numismatic magazines. I skimmed them cover to cover, and paused to read, and reread, items of interest.

I must give a nod to those rascally politicians in Washington, DC, who in 1878 foisted upon the American public the Bland-Allison Act, which let forth a Niagara of silver dollars that no one needed or wanted! We coin collectors also need to thank Mint Director Henry R. Linderman, who in 1878 was in such a hell-bent fury to get silver dollars minted, immediately if not sooner, that this was done before either the designs or the die-making process had been perfected—necessitating a whole bunch of frustrating (to Mint people) and absolutely delightful (to later generations of numismatists) changes!

Further, we need to acknowledge the little-known George W. Rice, who in 1898 was the first to write a technical paper on Morgan dollar die varieties, then called “Bland dollars” by everyone. Rice was the intellectual ancestor of Howard R. Newcomb, Francis X. Klaes, Neil Shafer, the Van Allen and Mallis duo, Wayne Miller, and many others—enough scholars to create a substantial bibliography (another feature of the Guide Book).

Today, here and now, I especially appreciate the truly wonderful wide world of collectors, dealers, and students who have been involved with Morgan dollars, either casually or deeply.

This article is excerpted from the Guide Book of Morgan Silver Dollars.