As collectors continue to wait for the first release of the series for this year, more of the 2010 releases of the First Spouse Gold Coin Program have sold out. 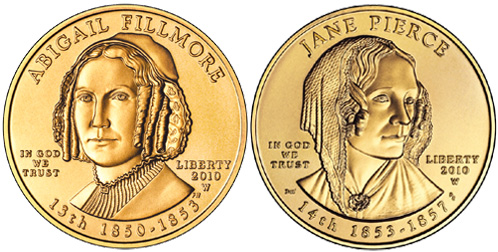 The 2010 First Spouse Gold Coins featured Abigail Fillmore, Jane Pierce, James Buchanan’s Liberty, and Mary Todd Lincoln. The Buchanan’s Liberty coin featured the image of Liberty from Christian Gobrecht’s Liberty Head Quarter Eagle issued from 1840 to 1907. Each coin was available in either proof or uncirculated versions. Currently, four out of the eight total options for the 2010 coins have sold out.

The first option to sell out was the proof version of the James Buchanan’s Liberty Gold Coin on February 8, 2011. Closely following the sell out, the US Mint indicated that the coins had been struck in quantities below the maximum mintages based on demand forecasts. Typically, the US Mint seeks to continue sales of each release for approximately one year after the release date.

Next to sell out was the proof version of the Jane Pierce First Spouse Gold Coin on March 4, 2011.

Earlier this week on Mach 22, 2011, the uncirculated versions of the Abigail Fillmore and Jane Pierce First Spouse Coins were sold out.

The 2011 releases of the series will honor Eliza Johnson, Julia Grant, Lucy Hayes, and Lucretia Garfield. The US Mint has announced the designs to be used for the coins, however the release date of the first issue is still to be determined.