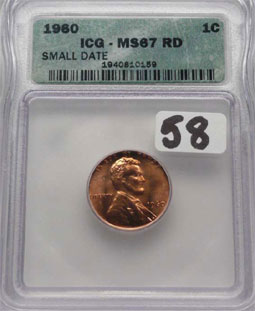 Coin Update viewers always have fun seeing whether I can predict what slabs will cross over to PCGS. First, a disclaimer: We’d send crossovers to NGC if that top-tier company would revert back to its policy of considering crossovers from all slabs other than PCGS. Its current policy makes absolutely no sense because NGC allows its and PCGS coins in its set registries, whereas PCGS only allows its coins, so all NGC has managed to do is create more business for PCGS.

To see how we have been urging NGC to revert to its old policy, read this post.

Back to the topic at hand: On Nov. 29, we published this post, making crossover predictions on these coins and using these exact words to describe chances:

Well, the 1921 Pilgrim did not cross because of questionable color. I had thought PCGS would realize the age of the Accugrade holder in considering “ANY” PCGS grade. It didn’t. And this is why I am still upset–not at PCGS but at NGC–for not considering holdered coins by companies other than PCGS. My options now are to crack out the coin and send it to NGC, with a high chance of probability that it, too, will say artificial color because it won’t get to see the holder in which it was housed for years.

Other than that, though, PCGS responded as I anticipated it would. Here is a screen shot of its grades on this crossover submission.

As you can see, the 1873 Open 3 Cent actually had its grade increased from VF20 to VF25. PCGS does increase crossovers when they merit that, and here again is another proof of that assertion.

I predicted the PCI coin would be downgraded significantly. It did not cross.

The ICG coin, 1960 Small Date, really looked to me like the correct grade at MS67, which would have been worth $3500 in a PCGS holder. As predicted, PCGS doesn’t like ICG coins and lowered the grade by two full points to MS65 Red.

I’m happy with PCGS. I’m irritated with NGC. Why on this last coin? If NGC considered crossovers from ICG, I would not have marked this slab “ANY” when submitting it to PCGS. I would have marked it “Crossover,” with a Plan B to send it to NGC.

Oh, well. Maybe NGC will read this crossover column and reconsider what Coin Update News has been advocating now for more than a year–a change back to its old policy in the name of numismatics. (It claimed it changed the policy for “customer service” reasons because submitters became irritated when grades were lowered from other slabs.) Perhaps it will see the wisdom of competitor Don Willis who once told us that PCGS wants the best coins in its holders and has no plans whatsoever to stop considering coins for crossover consideration.

So we’ll keep sending to PCGS and hope our viewers do, too, until NGC sees the light.